Heads or Tails? The Tai-Yaki ( 鯛焼き)-Eaters Dillema: A closer look at one of Japan`s favorite snacks 7 January, 2011 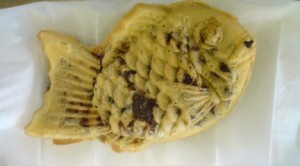 Where just a few years ago were forest and field, now stands an immense (by Japanese standards) shopping mall called Iias, which some believe means “a good tomorrow” (ii asu), while others insist that it is named after the great warlord and founder of the Tokugawa Shogunate, Ieyasu. The debate rages on. Wandering its corridors the other day reminded me a bit of the huge airport outside of Kuala Lumpur, which at one time was the biggest terminal in the world. The small number of travellers utilizing that facility (it’s hard to compete with the Changi Airport in Singapore, which is relatively nearby) makes it seem even more spacious than it really is, and quite a bit forlorn as well. I had the same feeling passing by the mostly empty, generic shops at cavernous Iias. Even the book store, which I had been looking forward to browsing at, proved to be richer in square meterage than in good books. I have never seen a book store in Japan with so much empty space between aisles. 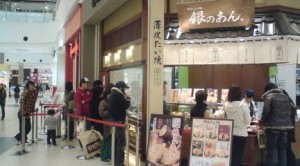 After buying a book (I couldn’t resist), I made my way down to the ground floor and spied in the distance a kiosk type shop (one that you cannot enter) which actually had a long line of customers waiting patiently to be served. From afar I saw that the shop was called Gin No An (銀の餡) and I curiously approached it to find out what it was selling – ah-ha — tai yaki (鯛焼き) those fish shaped waffle-like snacks usually filled with bean paste. I asked how long the wait would be, and was told 45 minutes! Well, I had my newly purchased book with me, so I figured, what the heck, these MUST be great tai yaki with a line this long. I asked my fellow liner-uppers if this was a famous chain, and was told that it was, and that there were always lines like this in front of this outlet, in fact usually even longer.

I tore open the plastic bag containing my book, held it up to my face, and fanned through its pages, inhaling that exhilarating NEW BOOK smell, and started reading while I waited. And wait is what I did. After a while I began to feel ON EDGE, not only because of the unusually long stand-around, but also because I’m a very impressionable reader, and the novel I had just started was Sylvia Plath’s The Bell Jar, the story of a young woman’s descent into MADNESS. Fortunately, the line eventually advanced far enough so that I could now observe the staff, deep in concentration, scraping the grills clean, filling them with dough, adding filling, etc., which made the waiting (something I don’t usually do)  easier, and calmed my nerves a bit. 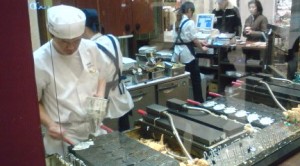 When it was finally my turn to order, I just couldn’t make up my mind as to what filling to get, as GIN NO AN offers an interesting selection, so I took the easy way out and ordered the special six- type set. I  was promptly given a hefty, steaming bag of tai yaki. Since I knew that if I opened the bag then and there I would end up eating the WHOLE BATCH by myself, I decided I would take them back to the Japanese friends I would be meeting later.

Not only were they thrilled by the special treat I had brought, but the tai yaki proved to be a great conversation piece, stimulating a long and excited discussion. The key question my friends asked each other was how they went about eating tai yaki — from the head or from the tail? My group seemed to be divided on the subject, some liked starting with the head and working down (since the tip of the tail has no bean paste some thought it was a mouth freshener — KUCHI NAOSHI — at the very end), while those who loved the bean paste finished with the bean-filled heads. There were also those individualists who actually broke the Tai Yaki open and ate each half from the inside out! I also found that there were those who liked crispy outsides, and those who prefered them soft, and of course, there was the question of favorite fillings. In fact I hadn’t had such an animated discussion with these friends since I had asked them what kind of ramen they liked!

Of course, I put in my own two cents, a little bit about the history of these long popular fish-shaped snacks (for many Japanese they are actually a light meal!) 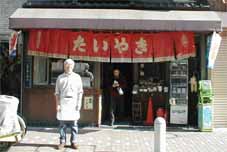 Tai yaki were the creation of the Naniwaya-So-Honten (浪花家総本店) of Azabu Tokyo, which first started making them way back in 1904. The tai (鯛), or Japanese sea bream, has long been considered a sign of fortune and celebration. This is because of its red color, and even more importantly because the name TAI sounds like the ending of OMEDETAI, which means “something to celebrate”. Back in the early 20th century, real sea bream were too expensive for the average Japanese, so when the sweet shop in Azabu made inexpensive tai shaped waffles filled with bean paste they were a big hit. And while most such big sellers quickly fade away in Japan, the popularity of tai yaki has proved enduring.

The peak of this popularity appears to have been in the mid-1970s with the appearance of a surprise hit-song “Oyoge! Tai Yaki-kun” (Swim! Tai Yaki) which was originally marketed as a children’s song but whose lyrics hit a chord with the average salary-man (the fish, tired of being grilled everyday, escape to the sea!). The song’s success fuelled a tai yaki craze at the time. Like most fads in Japan, however, after a few weeks of intense airplay, this song was hardly ever heard again (in fact I had never heard it until this week). The snacks themselves still live on, while the song merely remains ingrained the memories of people of a certain age who happen to be eating them. Oh, you can hear the song here.

These days tai yaki can be found in many different sizes and with various fillings. Gin No An has chestnut, sweet potato, sesame, etc., while the tai yaki vendor at the Seibu department store in Tsukuba has custard cream filling.