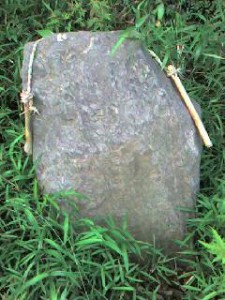 O, the fleeting nature of all things! How movingly (and persistently) the Japanese poets have spoken of the impermanence (mujo, 無常) of our protean world. Their words and world-view have always seemed to ring true for me, hitting a chord which has resonated time and again, most recently, in my encounters with Tsukuba’s Himachi Stones, said to be the oldest in all of Japan.

Himachi-Kuyo-To (日待供養塔) are a type of carved devotional stone, known as sekibutsu (石仏) or Stone Buddhas. This English translation can be misleading, however, as many types of these carvings are not images of Buddhas or Boddhisatvas, but symbolic shapes or else stone slabs with inscriptions in Japanese, Sino-Japanese and/or Sanskrit. They stand out in sharp contrast to other folk objects or structures in Japan, as they are made of stone and not the more highly perishable wood, straw or paper. Ibaraki Prefecture is a veritable treasure trove of these testaments to past generations’ devotion to the health and safety of family, neighbors and their descendants, and the Himachi Stone genre of Sekibutsu is one of the rarest.

Himachi can be translated as Sun Waiting, or waiting for the sunrise. It is a custom which has been practiced at various places throughout Japan since ancient times, with likely connections to the Sun-Goddess Amaterasu. It manifests itself most clearly these days in the popular custom of staying up all night to greet the Hatsu Hinode, or first sunrise of the year. Himachi, however, was not restricted to New Years Eve. On a selected auspicious date, friends and neighbors would gather for an all night vigil of chatting and eating, waiting for sunrise, upon which silent prayers were offered. Nodding off was considered to be highly inauspicious. When such himachi events were held by the same members for consecutive years, those who could afford it had stone monuments erected to commemorate the events.

I had long known that the Himachi Stone located on the roadside near the torii gate of the Inaoka Kaminari Jinja (near where Nishi-Odori meets the Ken-Odo) was considered to be the oldest known extant stone of its kind in Japan. It was erected in 1595, after a party of 8 had gathered for sun-waiting on January 20th for 3 consecutive years. I have always savored this obscure bit of trivia and felt amazed that such a superlative stone would be found right here on my home-ground. I knew that the Noguchi family, the traditional caretakers of the stone, had been maintaining the slab itself and keeping the himachi custom for more than 400 years. Hiroshi Noguchi would stay up all night on January 20th after offering sake and rice cakes and decorating the stone with curious paper targets which he shot at with a tiny bow and arrow set he had made. When the sun would rise, Noguchi-San would greet the solar orb with reverence and go back home feeling assured that by carrying on the tradition he had contributed to the well-being of his family.

As I mentioned earlier, however, everything passes. When I recently swung by the Inaoka Hamachi Stone to show it to a friend, I noticed that the grass had grown high, almost completely obscuring the stone. I guessed that it might have been just due to the abundant rain of the previous day. When I went to the Noguchi’s house though, I found that Noguchi-the Elder was bedridden from old age and that his son and grandchildren were not interested in carrying on the family tradition.

They also startled me by mentioning that they had heard that another, even older himachi Stone had been found, though they didn’t remember where. This was truly adding insult to injury. Not only was the stone being abandoned to the wild,but it was not even number one anymore.

I immediately contacted the Sakura History museum for confirmation. Yes. It was true. A Himachi stone dated 1593 had been identified. But where? I couldn’t believe my ears. The newest oldest stone was located within the limits of you-know-where: Tsukuba City! Though the stone had been located in the Usui district, at the northern end of town, just past Hojo, it was unbelievable. We still had bragging rights!

Naturally, I headed off to see it with my own eyes. It was not easy finding it, though, and it was only by what seemed like divine intervention that I got there. Wandering around the general location I assumed the stone to be in, I bumped into a solitary gentleman walking on the road. It was Mr Sakurai, the man on whose property the stone stands! He led me there, and though I was only expecting an old worn out slab, what I found was quite moving and beautiful. Mr Sakurai doesn’t know much about the stone’s origins and his family had no knowledge of any customs related to it, but he does show his respect by laying a shimenawa sacred rope around it every New Year.

Both the himachi stones are well worn by age and Japan’s high precipitation rates. Though those who had them erected wanted their legacy to be set in stone for posterity, this dream has been slowly fading away. Soon the Inaoka Himachi Stone will be consumed by the forest and forgotten, while the traditions of the Usui stone have been long lost.

If you have the time and inclination, why dont you go seek out the stones? Pay your respects, contemplate loss, and maybe write a poem of your own. When you really think about it, it can be said that all change is superficial. Folks still go to karaoke and sing till dawn.

Its been three years since I wrote this article, certainly the only one in English ( and possibly the  only one in Japanese,as well!) on Japan`s oldest extant ( and at that time nearly forgotten) Himachi Stones.  Returning this week, however, to Inaoka, with the intention of communing a bit with nature amid the shrines majestic sacred grove, I found, much to my surprise- that the Inaoka Himachi Stone ( the second oldest in Japan), had been fixed up, and literally put on a pedestal! In some way it was more atmospheric the way I had found it the last time, but its good to see that the people still care- and that it will not be forgotten.

There is a detailed explanation- pretty much the same as I had written long before the rennovation ( perhaps they gleaned it off TsukuBlog!) and there is a drawing of what the inscription on the stone used to read like because time and the elements took their toll. 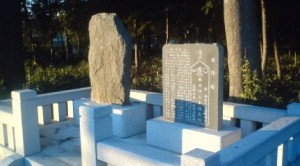 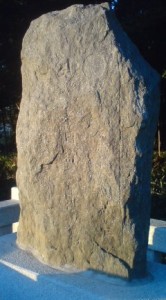