Maybe Your Bicycle WASN`T Stolen- it might merely have been RELOCATED nearby by Tsukuba`s INDEFATIGUABLE early morning BIKE-MOVERS! 3 December, 2010 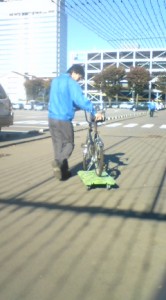 Moving bicycles before opening for business- at the Days Town Parking lot in Tsukuba at 9:30 on a weekday morning

I was without bicycle again. Though Japan is still one of best countries in the world ( if not THE best ) in terms of physical safety and the security of one`s  private property( despite the recent rise in burglaries, confidence games, and sensational murders), my bike was missing AGAIN after I had left it overnight in front of the Seibu Department Store in Tsukuba. To tell the truth, I was not even surprised. I expected it to be missing when I got there, because it had happened so many times before ( no, I DONT learn from past mistakes!). When I got to where I had left it and did find that it was in fact missing, I muttered a fatalistic ” I knew it”, to myself, and assuming it had been stolen ( since I had locked it and thus if it hadnt been stolen it would certainly be in the same place), I gave up and walked away thinking dejectedly about how I would now have to buy another bike.  I was resigned to a belief  in something I had heard repeated again and again over the years- that in Japan there are two items which are fair game for the taking- unlocked bicycles and umbrellas. And though most of my stolen bikes HAD been locked, because of my accepting that notion, I ASSUMED that all my bicycles has been stolen. 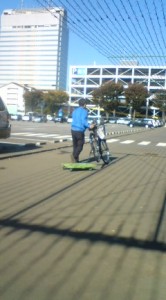 Trick of the trade- putting the locked wheel up on a pallette so that the bike can be rolled away!

But last week, I made a discovery which now makes me bite my tongue for having so often complained of bicycle thieves in Tsukuba ( though there certainly are some). Ironically, it was because I DIDNT have a bike on that day that I was able to do so. That and because it was such a fine INDIAN SUMMER morning. For these reasons I decided to walk to the small shopping center called DAYZ TOWN to get my cell phone fixed. And since I had an appointment at 10:15 AM ( I teach a folk-singing class), I had to get to be at the shop right at the 10 o`clock opening time, so that I would be able to make it to work on time ON FOOT. Not being sure of EXACTLY how long it would take to get to DAYZ TOWN, I gave myself an hour. Much too much time, but I planned on enjoying the beautiful day.

I ended up arriving at the shopping center, about 25 minutes before 10, when all its doors were still closed. I decided to sit on a bench adjacent to the big parking lot which lies between DAYZ TOWN and the big Toyota dealership. I took out my dog-earred copy of Don Quixote ( Cohen`s translation) which I was re-reading, and set about savoring each delicious sentence in the mid-autumn glare.

my concentration was broken. I looked up to see a middle-aged DAYZ TOWN employee walking a bicycle past me. What was making the noise was the pallette on wheels which the bicycle`s back wheel had been placed on.

Then I realized that the back wheel of the bike was locked and had to be placed on the pallete for easy rolling. I watched as he took his ward all the way to the end of the parking lot, where there seemed to be MANY more bikes clumped together. He dropped it off there with the rest and started back.

At the same time I noticed another employee, busy at the same task.  He also passed by me bearing a locked bicycle on a wheeled pallette. RRRRRRROOOOLLLLLLL.

It struck me like satori! Locked bicycles CAN be moved without much difficulty! The pallettes! Ingenious!

Maybe all the shops in Tsukuba ( and Japan) clear the bikes left out in front their entranceways every morning ( or at some other regular intervals). It made perfect sense!

I watched them a their task for 15 minutes, until they had cleared away all the bikes which had been left parked near the shopping center`s and tranferred then to a kind of holding center for bikes at the far end of the parking lot.

I realized that all the bicycles that I had lost around the Seibu Department Store might not have been stolen after all! They might have merely been moved! 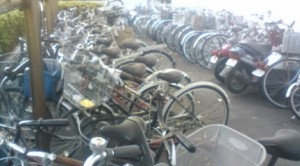 After finishing up my business at the phone shop and then my class over at Tsukuba Center, I immediately headed towards the department store. Walking around the vicinity of where I had left my most recently disappeared bike, I found two area jam packed with bikes, one to the north and one to the south ( though all within a 70 meter area). Looking for one particular bicycle was no easy task considering how densely packed they were standing, but to my great surprise ( relief, embarrassment AND satisfaction) I FOUND MY BIKE. Still locked. As final proof that it was mine, I slipped the key ( which I still had in my pocket) into the lock, and VOILA!

I had never thought of looking at any separate areas before because I had assumed that moving locked bikes would be to troublesome of a task. I never had imagined that they would use wheeled pallettes to due the task!

I plan to go back and do a bit more rummaging. I might find some of my older missing bicycles! 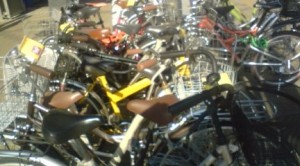 A cluster of relocated bicycles near Seibu in Tsukuba

So if you`ve  had a bike that you thought had been stolen (which had been left out overnight ( for some reason) in front of a shop or shopping center), you too might find them –  moved out of the way, to some nearby location- by Tsukuba`s indefatiguable early morning bike-movers!

Sorry. I cant help you with your lost umbrellas!