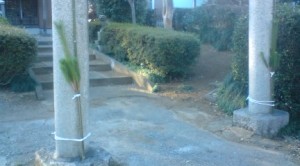 By Avi Landau
Alice, a frequent COMMENTER on Tsukublog, sent in a photo she had taken in her neighborhood (not in Tsukuba) showing two simple pine branches set upright  in front of someones entranceway. 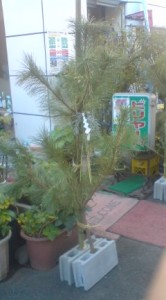 Some might ask just exactly what these were.
In a recent post, I described how as part of their preparations for O-Shogatsu, the Japanese New Year Festival, many people set up Kado Matsu on both sides of the entranceway to their homes, office, shop, etc.
I described Kado Matsu in this way:
Kado Matsu ( 門松), which usually consists of 3 bamboo stems (representing heaven, earth, and man), pine branches, and plum bound together are placed at each side of the main gate to a house, shop, or building and are believed to act as YORISHIRO, poles or antennae on which the GODS can descend. Pines, which are evergreen, represent long life, and plum is the earliest blooming flowering tree of the year, resistant to cold. Bamboo grows vigorously, straight and tall, making these plants highly auspicious. Placing Kado Matsu at the doorway ensures that the Toshigami can find your house without confusion. This custom as it exists today seems to have originated in the Edo Period (1600-1868), though the aristocrats of the Heian court would go to gather pine branches on New Year’s Day. Before WWII it was common to go cut the pine branches and bamboo for Kado Matsu on the 13th of December, but now they are usually bought at stores and set up by the 28th. 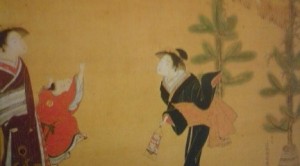 These pine branches which Alice found in her neighborhood ARE Kado Matsu- in their purest form- without any of the other auspicious EXTRAS- bamboo, plum, oranges, shrimp, chrysanthemums, and nandian, manryo or senryo berries, which have been added on over the years to provide ever more positive symbolism and showy extravagance.
This can be seen quite clearly in the name itself- KADO- MATSU, which literally means the ENTRANCEWAY PINES.
Also, going into the woods and getting material for making a kado-matsu is called MATSU-MUKAE (松迎え), or greeting the pine- which can be seen as a ritual enactment of going to a mountain ( where Japan`s forests usually are- even in flat Tsukuba, woods are called YAMA, mountain!) and escorting the God of the Mountain down to the fields.
Another interesting point is that MATSU ( pine), also means TO WAIT, and thus placing that at your entrance way you are saying that you are WAITING for the arrival of the TOSHI GAMI SAM- with anticipation!
Paintings depicting pre-Edo period New Year`s celebrations also show us how simple pine branches were used as KADO MATSU. 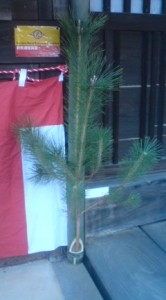 ( However, historically materials other than pine have used as the main element in kado matsu- ant evergreen ( or bamboo) could ostensibly be used. And these attractants for the God of the New Year did not necessarilly have to be put at the entranceway- inside the house, or anywhere within the grounds could have been possible. Just look at the painting above).

And though it is common in Tsukuba for homes and businesses to have extravagant kadomatsu – with all the accoutrements, at their entranceways, by amazing coincidence, just after having recieved Alice`s photo, I stumbled upon a neighorhood in which every house and shrine seemed to use just the simple pine branches. This was in the area around the Ishigami Jinja Shrine, just near the Joso Line`s Minami Moriya Station.
Just to confirm what they were called, I asked one man who was fixing the pine branches to each side of his gate. He said: Kado matsu. 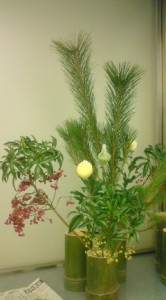 Tsukuba just before O-Shogatsu is both tranquil and frenetic. It is peaceful because there are so many NEW RESIDENTS and students who live here. Since a large number of them go back to their HOME-TOWNS for the holiday, some parts of Tsukuba which are usually bustling, become veritable ghost towns.
And since many businesses are already on holiday, there is much less truck ( and other) traffic on the roads.
Inside certain shops, however, the atmoshere is excited, as families ( it might only be this time of year that so many husbands and wives can be seen out food shopping together) make their last purchases in preparation for the holiday.
The sales staff, also seen to put extra energies into their calls to and treatment of their customers. 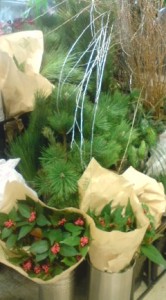 Walking around Tsukuba this morning I took special note of all the various KADO MATSU ideas which have evolved over the years- each one incorporating different ENGI-MONO- symbolically auspicious items, which are used to invite good fortune.
First there is PINE, ever green, symbolic of long life and continuity. It is also an attractant for the God of the New Year ( O-Toshigami-Sama)
Plum- the pleasingly fragrant, first blooming flower of the New Year ( though now, since O-Shogatsu is celebrated in January instead of February- as it still is in China, it is difficult to get plum branches in bloom so plastic is often used).
Bamboo- grows straight and tall
These three, pine, plum and bamboo are considered the Kings of Engimono ( auspicious symbols), and are the most common elements making up a Kado Matsu. 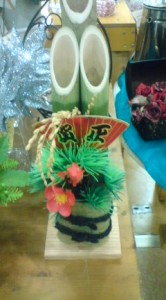 But then there are those which incorporate:
The berries of SENRYO or NANRYO, are a beautiful red color and symbolize having many descendants, as their bushes bear many berries.
Nandian berries ( nanten no mi) symbolize getting rid of troubles, as the name nanten could be taken to mean tranferring difficulties away ( nan o tenjiru).
These berries also have green leaves in winter symbolizing hardiness and long life.
An orange (daidai), represents the continuation of the family line, as the Japanese name could also mean generation after generation. 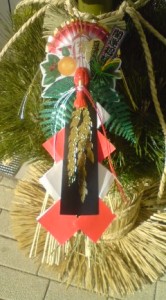 A cardboard attachment on a Kado Matsu showing an orange. There are also plastic ferns and a plastic shrimp fixed to the picture- at IIAS a shopping mall in Tsukuba

A shrimp might also be used because its bent back represents achieving old age. 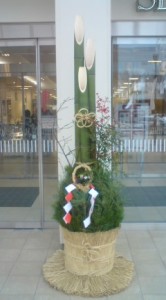 You might have some time for some exploring in the coming few days. Keep an eye out for any interesting KADO MATSU. Japan`s most visible New Year`s decorations.
They come in all forms and sizes- from the extravagant and showy- to the simplest pine branches. 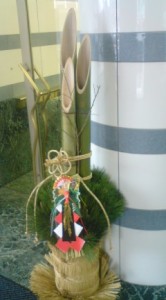 The kado matsu outside the Okura Hotel intersting in that it uses a PHOTO of an orange ( instead of a real one), to go along with the bamboo,pine and plum 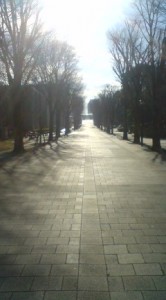