Japanese Christmas- A look at the history of Japan`s celebration of Western Culture- KURISUMASU (again) 22 December, 2010 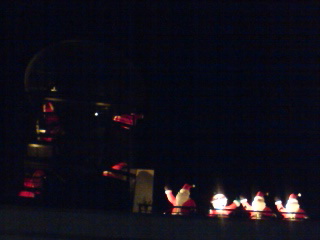 Over the centuries, the annual cycle of traditional events (年中行事, nenchugyoji) in Japan has gone through many changes. Certain ceremonies and traditions have disappeared altogether, while many that have survived have taken on new forms and/or new meanings. Other events have been  recently, or not so recently created or introduced from abroad, especially, since the onset of modernization in 1868, from the US and Europe. Among these imports are the increasingly popular Valentine’s Day, Mother’s Day, Father’s Day, and Halloween.

The most popular festival to have come from the West, and now one of the most popular of all the Japanese NENCHUGYOJI, ranking right up there with New Year’s (O-Shogatsu) and O-Bon (summer festival for welcoming the ancestral spirits ) is Christmas, or as it pronounced in Japanese KURISUMASU. 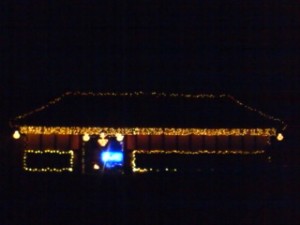 Gate of a traditional farmhouse in Tsukuba lit up for Christmas

It is certainly not surprising that the Japanese Christians, who number between one and two million (1 or 2 percent of the population), should celebrate a traditional Christmas. But it is curious that the non-Christian community has taken up observing Christmas with such enthusiasm. It is also fascinating to look at some of the unique ways of celebrating Christmas which have arisen in Japan, especially since the end of WWII. These include families enjoying Western style cake and chicken (thus the impossibly long lines at cake shops and Kentucky Fried Chicken outlets on Christmas Eve), drinking wine or champagne, having Christmas Parties, and most surprisingly, in the case of singles, spending the night with your sweetheart at a fancy western style hotel (or love hotel, to which there are also long lines!), preferably in a modern city (by this I mean Tokyo, Kobe or Yokohama, as opposed to Kyoto or Nikko). All this adds up to a kind of westernized mirror image of O-Shogatsu, with its rice cakes, fish, sake, and multi-generational, busy family gathering.

Let’s take a brief look at the history of Christmas in Japan (though a full length book would be more appropriate) for a better understanding of what this festival means to the Japanese.

First of all, it is important to note that Christmas was first introduced to Japan 450 years ago, by Spanish and Portuguese missionaries. There are records (kept by these missionaries) of some of the earliest Christmas observances in Japan. These are described as having been all-night affairs featuring the performance of as many as six masses, the recounting of Bible stories, the teaching of Christian doctrine, and of course music. The missionaries trained choirs and helped put together Christmas pageants and passion plays. The word used for the holiday by the Japanese at that time was Natara (from the Portuguese Natal).

Over the last decades of the 16th century, Christianity drew many converts in Kyushu and Western Japan. Among these were several Daimyo (lords) who at that time happened to be battling each other, as Japan was in a state of civil war. It is surprising to read in the journal of the Jesuit Luis Frois of how on Christmas the warriors of opposing camps would call a Christmas cease fire to celebrate the holiday. On the day after services, hostilities were resumed.

These early Christmases also had an interesting impact on the evolution of classical Japanese culture, as it seems that the Tea Ceremony (sado, or cha no yu) and also the Kyogen Theater were influenced by the Catholic Mass and by the Christmas Pageants, respectively.

Though the national unifiers Oda Nobunaga, Toyotomi Hideyoshi, and Tokugawa Ieyasu all showed an interest in the foreign missionaries (especially in the profitable trade and military know-how associated with the foreigners), Ieyasu grew suspicious of their intentions and also of the growing number of Japanese Christian converts. He ordered that Christianity be completely banned in 1614. Some Christians fled to Macau or the Philippines, while others tried to keep their faith in secret. This was far from easy, since the government took extreme measures to root out any vestiges of Christianity ( ironically, in a fashion similar to the way Christians in some parts of Europe and the New World suppressed other faiths), using torture and execution without restraint. Tens of thousands were martyred. 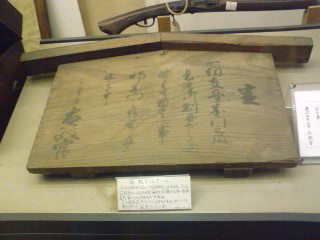 An official proclamation board (kosatsu, 高札), reaffirming the ban on Christianity in the first year of Meiji (1868) can be seen at the Sakura History Museum, behind the former Sakura Branch Office of the Tsukuba City Hall. The board was posted at the official notice ground in Uenomuro, Tsukuba, and remained there until the 3rd year of Meiji (1871), when the ban was lifted.

During the ban on Christianity, hidden Christians, in the remotest parts of Japan (especially the Goto Islands in Nagasaki prefecture) continued to observe Christmas in disguised forms, under the pretext of acknowledging the winter solstice. Without the guidance of priests or other teachers, however, their worship evolved into something unrecognizable to the mainstream Christians who encountered them more than 200 years later, when Japan opened itself up once again to the world.

For more on these KAKURE KIRISHITAN see http://www.uwosh.edu/faculty_staff/earns/miyazaki.html

During the Period of National Isolation (sakoku), which began to set in in 1633 and started to crumble in 1853, it was even illegal for the few foreigners who had official permission to stay in Japan to carry out any form of Christian worship, and thus the Dutch who were living in the trading post of Dejima, Nagasaki, held covert Christmas observances which were carried out under the guise of Oranda Toji, or Dutch Solstice.

Though Japan’s Christian community is certainly aware of the sufferings of Japan’s original Christians, Christmas as it is celebrated by the non-Christian Japanese public today, has little or no connection to this history. Kurisumasu, for them, can be said to be a festival which connects the Japanese with the wide world, as a celebration of Western (American and European) values, tastes and forms. We can find its roots in the enthusiasm for everything Western that sprang forth in the Meiji Period (1868-1912). It was able to thrive because of the Japanese love of decoration, cute characters and any occasion for PARTYING. More important might be the skillful manipulations of the great advertising houses. Most important is surely Japan’s defeat in WWII and the subsequent American occupation.

In the early Meiji Period, Christmas trees and decorations, parties, presents, and Santa himself first appeared in the most Westernized areas of Tokyo (such as Ginza) and in the port cities opened to foreigners (Yokohama, Kobe, Hakodate, Nagasaki and Niigata). They were brought in and promoted by department stores, embassies and elite schools. As Japan at that time was doing its best to join the fraternity of Western Powers, Christmas culture was a MUST for those who moved in high society, and Western style formal wear, food, and drink were important features of early Christmas balls held at such exclusive venues as the Imperial Hotel and the Rokumeikan.

Still before the end of the war (during which once again Christmas celebrations went all but underground — there are famous stories of Catholic masses held in underground bomb shelters as US air-force bombs marked “Merry Christmas” rained down on Tokyo and Southern Ibaraki), it could not be said that celebrating Christmas had trickled down to the general Japanese public. This happened only during the occupation, with the support of both the American and the new Japanese governments (Prime Minister Yoshida’s Christmas shopping was highly publicized) and various missionary groups which flooded into the country.

In the years just after the war, Christmas came to be connected in the people’s minds with peace, freedom and prosperity and the war weary Japanese took to it with enthusiasm. Children loved the presents and SANTA-SAN, women didn’t have to be continuously busy, as they did at their in-law’s house during New Year’s, the Northern European and American style Christmas decorations were perfectly suited to Japan’s winter, looking more natural here than say Sydney, Miami, or LA. And cake makers such as Fujiya successfully promoted cake eating for the occasion, just as KFC and MOSBURGER did with chicken.

Another Western import was the idea of romance and sexual freedom for women, which has become a cornerstone concept of Japanese Christmas, as couples book fancy restaurants and hotels long in advance in order to spend a very special Christmas Eve. For me it seems that this Christmas for young couples is more similar to the western Valentine’s Day, than is the Japanese version of that February festival, in which women (only) present chocolates to colleagues, teachers, etc.

Long lines at KFC in Tsukuba 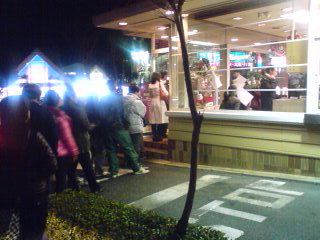 In Tsukuba on the night of the 24th, you might have been trapped in the traffic jams created by all the cake shoppers (especially around Cote d`Azur, Tsukuba’s most successful cake shop) and Kentucky Fried Chicken which had been taking orders several days in advance.

I spoke to one woman, who grew up near Mt Tsukuba Shrine. She told me that even just after the war all the kids on Mt Tsukuba believed in Santa-san and had their stockings filled with presents on Christmas Day. I was even more surprised when I heard that though she is not Christian, she would be attending midnight mass at a Catholic Church in Tsuchiura, just as she does every year.

Also when I went to take pictures of the amazingly lit up old farm house in Tsukuba`s Sasagi neighborhood, they chuckled when I asked if they were Christians. They said they put up the decorations for their grandchildren who like the pretty lights.

An interesting thing to note is that most of these decorations will be GONE right after Christmas, which is remeniscent of how the Japanese are careful to put away their Hina Dolls right after the Doll Festival ( Hina Matsuri) which is on march 3rd( after they have been displayed during the weeks leading up to it) .

As I said earlier, it would take a full length book to deal with the topic of CHRISTMAS IN JAPAN.
Unfortunately, with a full load of year-end and Christmas parties, I have just enough time to jot down these musings. 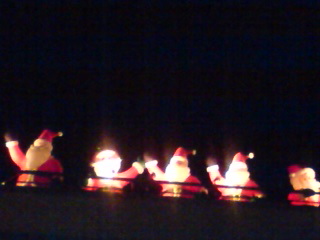 And as something to get you into the spirit of the season I have written a song for the holidays which I recorded with the TenGooz. Have a listen at:   http://www.jamendo.com/en/track/116594