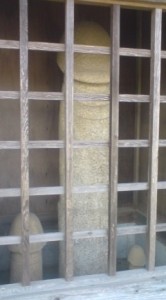 A large stone phallus ( sandwiched by two smaller ones) in Yatabe, Tsukuba (2010)

I have spent years slowly getting to know Tsukuba`s old shrines, temples and sacred stones. I thought that I had seen, or at least read or heard about, everything of interest. Little did I know that while spending a few spare minutes wandering  the side-streets of the city`s Yatabe District, I would stumble upon one of the most surprising discoveries I have ever made, of something that I still have not found mentioned in any of the literature on local history, religion, or folklore.

Passing by what looked like a small meeting hall (of modern design, yet quite old), I spied what looked like a HOKORA, a typical wooden structure with a roof of heavy tiles, used to shelter devotional objects such as sacred stones or statues. From the road I had only a side view of it in the yard behind the meeting hall. I went to have a look. I quickly realized that this was not merely one HOKORA , but three in a row, which meant several sacred objects could be found there. Peering into the first section I approached, I found two Daishi-Sama figures, images of the great priest Kukai ( known as Kobo Daishi), the founder of the Shingon Sect of Buddhism, which has long been popular within what is now Tsukuba City. These are a typical feature of this area, and I cooly took note of them.

In the middle section I found a devotional stone dedicated to the God of the Atago Shrine, which is usually associated with the prevention of fires (also quite common in these parts), behind a fragment of  what seemed to be a very old and interesting Buddhist monument, which I guessed had been brought to that spot from somewhere else for shelter.

It was when I looked into the last compartment ( the one on the far left) that I encountered something I never would have expected- an impressively tall, finely carved stone phallus, sandwiched between two, much small objects of similar design. 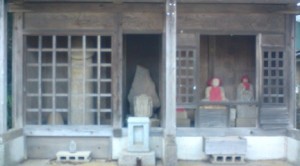 Excited by what I had stumbled upon, I spent a few minutes  looking for details and taking photos, Then I scoured the immediate vicinity for anyone that might be able to tell me about what these stones were. The only people I encountered, however, told me that they didnt know anything about them- besides the fact that they were shaped like a man`s private parts ( duh!).

Later at the library, I tried to find anything I could about these stone phalluses in books and journals on Yatabe`s history and culture. I found nothing. Not even in a very detailed book which supposedly documented ALL of Yatabe`s sacred stones. This seemed a bit odd to me and made me even more curious about that spot.

Dont misunderstand. Phallic stones- DANKON (男根, literally MAN-ROOT) in Japanese, are far from rare in Japan. It is not difficult to understand how that shape would come to represent the LIFE FORCE, FERTILITY and IMPREGNATION, and in fact they can often be found at shrines associated with prayers for good harvests, household safety, and  pregnancy. They can also frequently be found at mountain shrines connected with  YAMABUSHI ( mountain ascetics) such as Mt Kaba-San near Tsukuba ( since the mountains sacred to the YAMABUSHI were believed to be inhabited by a FEMALE deity, women were not allowed onto the mountains and wooden phalluses were set up for the Goddess).

What aroused my special interest in the phallic stones that I found in Yatabe, was that they were in the middle of a town. During the Edo Period (1600-1868) that spot was in fact, right near the JINYA  (official rest house), in an area which in those days would not have been considered rural. I had a suspicion that these DANKON had some other significance  than being used to pray for abundant crops or . the conception of a child. 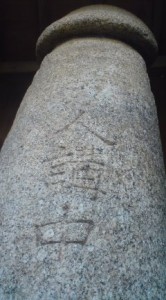 A few days later, still having found no written information regarding the stones, or anyone who could tell me anything about them, by incredible coincidence, I stumbled upon two paragraphs in a book which I think probably can clear up the question of what these Yatabe Phallic stones are.

I was reading a work called Songs to Make the Dust Dance: the Ryojin Hisho of 12th century Japan, by Yung-Hee Kim, which is a fascinating and highly readable examination of a collection of Heian Period poems which shed some new light  on the lifestyles and beliefs of the people, both high class and low, of that period. It is a well worth (repeated) reading for anyone interested in traditional Japanese culture, but here I would like to quote one paragraph, which I believe might explain the significance of the phalluses that I found. This is from the section of the text which discusses ASOBI- apparently a caste of women once involved in certain court rituals. When this function was eventually lost to them they had to resort to prostitution, a trade which they apparently plied on boats ( which could be the origin of the term MIZU SHOBAI- the water trade, which can be used to refer to bars,hostess clubs and other such establishments traditionally catering to men).

“In addition, asobi sought a further safeguard for their business prosperity in the worship of a deity called Hyakudayu. Hyakudayu was apparently a phallic cult, its object of veneration being representations of the male sexual organ made of wood, paper or stone. The cultic practice stems from the fetishistic belief that praying to and honoring Hyakudayu, the courtesans could ensure continued success in attracting male customers. The powerful appeal of the hyakudayu worship to asobi is evidenced in Yujoki , which notes that asobi kept hundreds and even thousand of these objects”. (Yung-Hee Kim)

The author then goes on to quote two IMAYO poems which mention Hyakudayu. I will include one here, the original, as well as Kim`s translation:

Her many arts, the drum, the little boats,

the woman who hold the large parasol

and the woman who rows her skiff

and Hyakudayu, the one she prays to for a man`s love

After finding these passages  however, I was unable to dig up any other textual evidence for a connection between phallic shaped devotional objects and Hyakudayu ( which seems to have been most common in western Japan, near Osaka etc.). Not only for the specific case of the Yatabe phallus, but for DANKON in general.

Still , I had a gut feeling that I was onto something. But maybe it was the thrilling coincidence of finding the passage in Kim`s book just at that particular time.

Anyway, after a couple of weeks had passed and I had found ( besides the poems in the Ryojin Hisho) written evidence only of  a relation between phalluses and FERTILITY in Japan, I decided to go back to Yatabe and try to find someone who lived nearby who could tell me some more.

When I got there, I found an old man coming out of a house nearby. He was a little surprised to see me, but quickly relaxed. When I asked him about the phalluses he told me he didnt know anything. Disappointed, I went to the stones to have another look.

Suddenly, the man came up to me. He told me that when he was young, women used to come and pray at this place.

Excited, I asked him what they prayed for- pregnancy?

“No”, he said.” They were women of the WATER TRADE”

When I asked if these women would make any particular offerings, he answered that they did not. He said that they would just come to pray.

I could hardly contain a grin of satisfaction! It seemed as though my hunch was correct! These were not the usual DANKON phallic images found in Japan. The types used to  pray for  fertility. These had long been used by geishas, courtesans,prostitutes and later hostesses) who were either praying for success in their trade, or possibly safety from disease or other dangers of the trade.

I will keep you informed of what I find out as I dig deeper. With perseverence I just might get to the ROOT of the matter!

And if you are interested in the book Songs To Make the Dust Dance- which you well should be, you can order it from amazon, or read it in its entirety ONLINE!