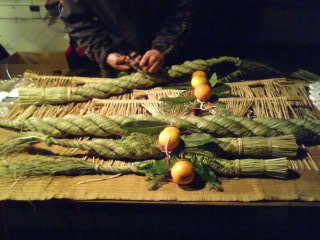 As I mentioned in a recent Tsukublog  posting, preparations for O-Shogatsu traditionally began on December 13th with a big end-of-the-year cleaning called susu-harai, or The Getting Rid of the Grime Ceremony. This originally had religious significance, in that it was believed that on New Year’s, the Toshigami-Sama (年神様), or the God of the New Year visited each household which welcomes it/them. It was thus necessary to purify the inside and outside of the house, shop, or office before other preparations could begin.

As with most things in Japan, there is a proper way to go about doing this, with a set order in which to proceed. The rule is to begin with the places that New Year’s decorations will be placed: the Buddhist and Shinto altars (for the returning ancestral spirits and the god of the New Year, respectively), the alcove (toko no ma) in the tatami room and above the place where cooking is done. Then the rest of the house is cleaned. It is important to start at the ceiling (over the altars and alcove, etc.) knocking down dust and cobwebs, and working down until everything can be dusted, swept up, and then wiped clean (with new washing rags which should be purchased in this season).

One interesting custom is sprinkling the wet dregs of Japanese tea (I mean the used tea leaves) on the mats of the tatami room before sweeping. This supposedly keeps the dust from rising. It also might have an anti-bacterial effect, and certainly gives the room a nice smell for a few days. In contemporary Japan many families wait till after Christmas for this big winter cleaning, but temples, shrines, companies and some families still keep the traditional date. An interesting point to remember is that the male head of the house, should participate in this cleaning and in all the rest of these preparations. This is because the Toshigami-Sama is a female deity according to some, who would not want to visit a home where the wife had to do all the work! 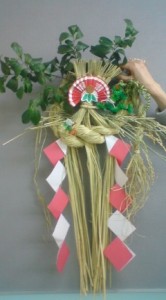 These decorations are collectively called O-Shogatsu Kazari (お正月飾り), and they are made almost exclusively of plants or plant matter, such as rice plants or rice cakes, bamboo, pine, plum, etc. Since the New Year begins after the winter solstice, a time of rebirth before spring (especially according to the old calendar), plants were used as symbols of life and rebirth. The Japanese expression for congratulations, omedeto, originally comes from the expression ome (お芽) de (出） to (度う), which means sprouts appear, or to sprout or to sprout forth. These decorations are a celebration of LIFE, RENEWAL and the BOUNTY of NATURE. Traditionally, they should be put up by December 28th, as the 29th (niju ku nichi) has the sound KU in it which is a homophone for the word suffering, and decorating on the 31st  is considered to be too hasty and very unlucky. The 30th is thus the last day on which the Shogatsu Kazari should be set. 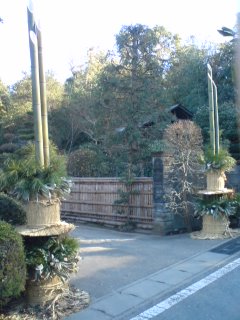 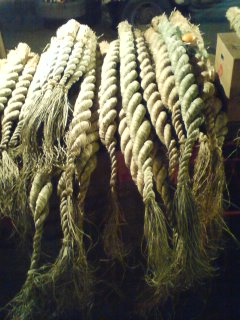 For placing in the Shinto altar, twisted sacred rope was usually made at home from straw, but can now can be purchased at any department store or home center. These shimenawa are twisted counter-clockwise (except for the giant shimenawa at the Izumo Grand Shrine), as this is the proper direction for inviting the gods (it is the direction of Bon dancing and the sumo wrestlers’ ritual). The shimenawa demarcates a sacred space, keeps out evil and also acts as a sign post for the gods. The origin of these sacred ropes lies in the story of the Sun Goddess Amaterasu, who after having been lured out of the cave she had been hiding in (ama no iwa to) and bringing back with her the sunshine which the world had been temporarily deprived of, was prevented from ever going back into seclusion by a rope of straw which was placed over the mouth of the cave. You can see a typical shimenawa here. 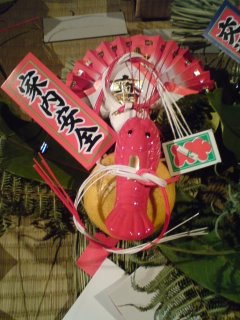 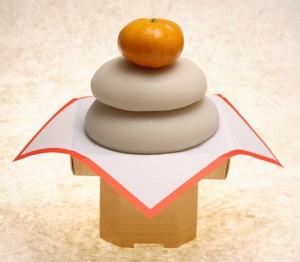 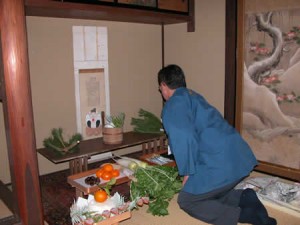 Well, I think that that is enough for now, as I have to finish up my own New Year’s cleaning. On Tuesday, the 28th, I will be heading  to the DORO ICHI in Yatabe, to pick up this year’s oshogatsu decorations.  Maybe I’ll see you there.