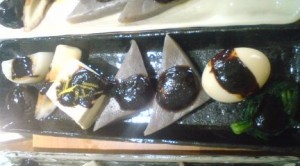 Oden- in the style of Mie Prefecture

Life in Tsukuba can be full of surprises. Most of them pleasant. Some of them VERY pleasant. Take yesterday, for example- which also happened to be  a glorious mid-November day. Instead of having our class at the Oho Community Center as we usually do, we were going to meet at the home of one of our members. I was looking forward to having a look at the new kitchen and sophisticated solar heating system which I heard had been installed. But I would never have imagined what else was in store- a veritable feast- with a very special highlight, which I will write about today:  Oden , done in the fashion of one of my students` home region- Mie Prefecture.

M-San ( she does not want her true identity revealed!), an indefatiguable traveller, has become somewhat of a walking encyclopedia of Japanese culture ( not to mention her knowledge of other world cultures), and her enthusiastic and detailed descriptions of the places she has visited would fill anyone with the desire to hit the road. I always tell her that I think she should write a book someday- or at least a blog! If she does`nt soon, I will start putting her stories on line for her!

More than any other places she describes, it is her home region which she evokes most lovingly ( I guess that is not surprising) and of course in  most vivid detail. Since we had a brand new state-of-the-art kitchen available that day, she pulled out all the stops to show off one of her home-town`s characteristic dishes- using a special touch- HACHO MISO- a  rarer and more expensive type of miso which is famous for its deep flavor. She had bought this gourmet bean paste at the factory in which it was made in Okazaki- the hometown of the founder of the Tokugawa Dynasty- Tokugawa Ieyasu. 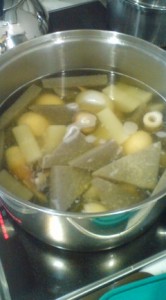 Before I tell you what Mie Style oden is like, I had better explain, to those who dont already know, what ODEN is in the first place.

Books in English on Japanese food culture refer to ODEN as HODGEPODGE! I cant imagine that this expression would be of much help to anyone who had never seen ODEN before, so let me try to explain what it is in my own way. Oden consists of various ingredients which are simmered in a special ODEN broth. These ingredients are certain set vegetables ( most promimently daikon radish), or other pre- prepared hand-sized tibits.  When heated, these do not do blend together in any way. They are eaten seperately, usually served in their broth ( which can be drunk) with a dab of hot mustard ( karashi) on the side of the dish. The standard tidbits which can be found in a simmering pot of oden are daikon radish, kelp,fried tofu,  konnyaku ( a kind of rubbery gel made for a tuber), and kamaboko ( a fish-paste stick).

Oden is a typical winter dish in Japan, and can probably most easilly be seen ( and SMELLED) at 7-11 `s and other convenience stores which start selling it ( you have to order each tidbit individually) from mid-autumn through late spring.

For many foreigners the unusually aroma which fills Japanese convenience store during this period, created by the daikon radish, can be quite off-putting ( because we have nothing like that smell in the west), but anyone who samples this hearty and healthy food, especially on a cold winter night with some sake, cannot help but grow addicted. 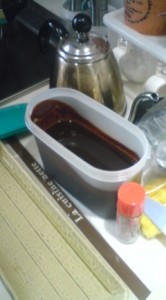 After being payed out on dishes, each tidbit is covered with a dab of home-made NERI-MISO

What surprised all of us the other day when we sat down for Mie Prefecture style oden ( which looks the same as the oden around here when it is cooking in the pot) was that instead of being served in the broth, with a bot of hot mustard on the side, we were served a set of oden tidbits arranged on a dish. with heaping splotches of miso on top of each one. Some of them were also garnished with yuzu(citron) rind shavings or a dash of chilli pepper.

We stood with mouths agape as M-San arranged the servings with the precision of a professional on the dishes she had brought from home for the occassion- rustically elegant TOKONAME-WARE ( once typical everyday household ware, but now quite expensive!).

She arranged  shiitake mushroom,daikon radish, kamaboko, tofu, konnyaku, hard-boiled egg, and shungiku ( which looked and tasted like a bit of boiled spinach) on each plate, in the same order.

Then each separate food got its gob of NERI-MISO, which M-San made from hatcho-miso ( which contains only fermented soy beans and salt), sugar, sake and mirin ( sweet sake for cooking).

The resulting taste experience was delightful. Each ingredient distinctive in taste and  texture, though linked thematically by the deeply flavored sauce.

M-San said that back home they ate this dish about once a month. I t was especially good for days after heavy meals or parties, as it is light and cleansing ( the konnyaku is good for cleaning out your insides!)

We were all surpised again when we heard that while this dish, as we were served it on that day was called ODEN in Mie, while what we would get at 7-11 here in Tsukuba ( or the rest of the Kanto Region was referred to as KANTO-NI in Mie ( maybe the rest of Western Japan. 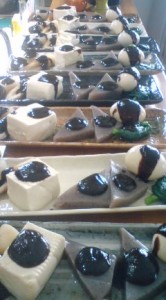