Pin-Wheels Set Up Around Tsukuba Center Make For a Quaint Art Installation and a Great (inadvertant) Political Satire 5 October, 2010 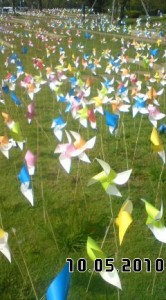 Totally winded, I stepped out of the Tsukuba Information Center and looked for a place to sit down. I had just finished giving a two hour  lecture  in Japanese (without having prepared any text!), and felt drained (of energy) and disappointed ( since I didnt do as good a job as I should have). The unseasonable heat on that late September day, didn`t make me feel any better, as I made my way across the elevated plaza between Tsukuba`s Nova Hall and the Okura Hotel which was sticky with the droppings of the thousands of starlings ( mukudori), who despite the indefatiguable efforts of the city`s bird chasers, persist in making the trees of the Tsukuba Center area their nightly roosting spot. Head spinning, I  sank my butt down onto the first bench I came to, and buried my face into my hands. 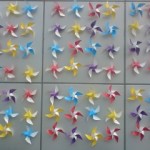 Pin-Wheels on the wall at Tsukuba Center (2010)

When after a few seconds I looked up and my vision slowly unblurred, I noticed the stirring of unusual activity. Some people with ID tags hanging down around their necks, were setting up PIN-WHEELS all around the area. They were sticking them into the soil around the trees, and taping them to walls and poles. When they finished with the pin-wheels they had at hand, they brought out some more- and then some MORE. In the end, (I later found out) they actually set up some 15,000 of these colorful paper and wood toys, turning the Tsukuba Center area into an unusual art installation, which I was not surprised to hear was concieved of with the notion of making passersby CONSCIOUS OF THE WIND. 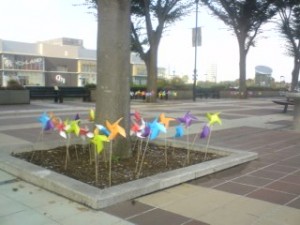 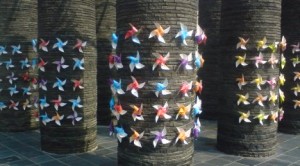 Though each of these individual pin-wheels (kaza-guruma, in Japanese) could not be said to be beautiful, and despite the fact that even in most of their clusters  they look cheap and unprofessional (they were  mostly made at elementary schools, and various facilities for the disabled around Tsukuba), the instillation CAN be charming and even fascinating to watch. What is most curious is how, while being all of the same design and size,   one pin-wheel might suddenly starts to spin, while another, even one right next to it and facing in the same direction does not. Observing this can be absorbing, and it might get you thinkin` about all sorts of thing. Its like Bob Dylan said- the answers to life`s deepest questions are blowin` in the wind. 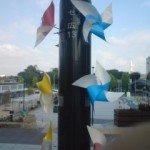 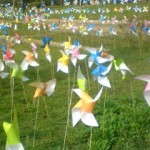 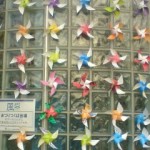 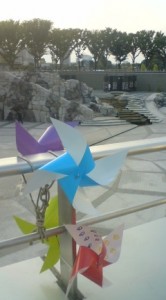 While contemplating the pin-wheels, and especially after realizing how most of the pin-wheels did NOT spin, something interesting struck me! Though I knew that it MUST be unintentional, I suddenly realized that this idea of setting up thousands of pin-wheels around Tsukuba Center could be seen as being pregnant with political significance. It is, in fact, GREAT SATIRE! Why? Well, some of you might remember that probably the most embarrassing episode in the short history of Tsukuba City had to do with VERY expensive windmills ordered by the city government with the aim of providing GREEN energy for our local schools. The problem was- the windmills almost NEVER spun! In fact, they eventually had to all be dismantled as instead of moving with the wind, at one school, the blades actually came crashing down to the ground with a strong gust!

Read all about it in an article I wrote two years ago:

Since paper pin-wheels are traditionally a symbol of spring in Japan ( and as a haiku seasonal key-word- KIGO, they also signify that season), it would seem to further indicate that those who conceived of this autumn installation had something deeper in mind than trying to get people to think about the wind.

Also, the mental association between pin-wheels and wind-mills is even easier to make for the Japanese that it would be for speakers of other languages. This is because both words are written with the exact same two characters- 風, meaning wind, and 車 which means wheel. For pin-wheel however, this would be pronounced KAZAGURUMA, while for wind-mill it would be FU-SHA.

On the other hand, however, it would seem HIGHLY unlikely that the event was planned with the intention of reminding Tsukubans of the now long gone windmills that didnt turn. Thats because in Tsukuba,  political SATIRE is unheard of. I would still like to imagine that this instillation shows that the wind of polital expression is blowing in a new direction.

Go have a look at the pin-wheels for yourself. They will be set up at Tsukuba Center till October 11th. Rain, WIND, or shine.