In Autumn MUMS THE WORD, as Japan`s Chrysanthemum Cultivators Dislay their Creations! The Chrysanthemum in Japanese History and Culture 16 October, 2010 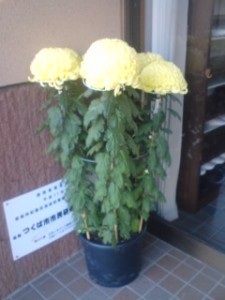 Walking through Tsukuba`s old neighborhoods in October and November, you will very likely see some impressive chrysanthemums (kiku) displayed out by the front doors of homes and shops, their big, heavy looking yellow, white or pink blossoms  sitting atop their slender leaf laden stems, often supported  by round metal frames.  You will also  often find prize winning MUMS on display and even shows of chrysanthemum SCULPTURE ( kiku ningyo) throughout this season at venues such as shrines and parks.

Believed by the ancient Chinese to possess special medicinal powers, specifically the ability to cleanse one of spiritual impurities and provide ETERNAL YOUTH, there is evidence suggesting that chysanthemums were introduced to Japan as early as the 5th century. There are,  however, NO references to this flower in the first ( and perhaps greatest) of Japan`s poetry anthologies, the Manyoshu ( compiled in the 8th century). 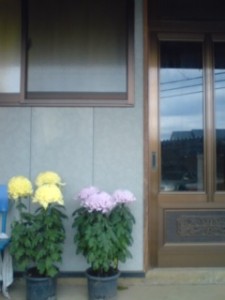 In the Nara (710-794) and Heian (794- 1185) Periods the aristocrats of the Japanese Court adopted the Tang Chinese custom of drinking chrysanthemum wine and rubbing ones body with cotton swabs soaked with chrysanthemum dew on the ninth day of the ninth lunar month( for the Chinese, odd numbers are YANG- bright and positive. Nine is the highest odd numeral ,which would make 9/9 the luckiest day of the year- right when the mums were in bloom). This event was officially called the choyo no sekku （重陽の節句), one of the five seasonal change days which the Japanese took on from China. These customs are described by Sei Shonagon in her Pillow Book  ( Makura no Soshi- 枕草子) and by Murasaki Shikibu, in her diary( both from the Heian Period). 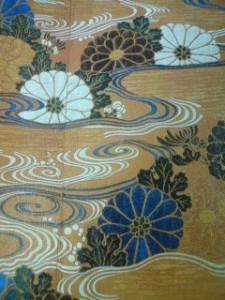 Because of  the fact that the chrysanthemum was so prestigious, with its Chinese lineage and its supposed purifying and life extending powers  ( besides the beauty of the flower itself ! ) many of Japans noble families, from the Heian Period on, adopted it in one form or another into their family crests or onto their kimonos or furniture. 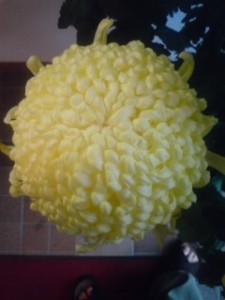 The first recorded connection between the chryanthemum and the Imperial family, however,  dates back only to the reign of the Emperor Ninmyo ( 仁明天皇 810-850), a grandson of the Emperor Kammu ( who had moved the capital to present day Kyoto). It is said that Emperor had a great fondness for yellow chrysanthemums and had them extensively planted on the palace grounds. He also liked to wear robes dyed yellow from these flowers. 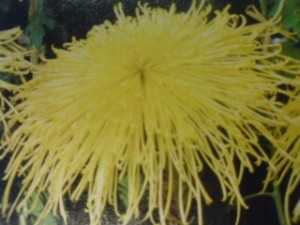 The KIKU was adopted on the Imperial Family`s crest by the Emperor Gotoba (  後鳥羽 1180-1239 ), who was also known to have a strong liking for these flowers.

During the Edo Period ( 1600-1868) the military class, continued ( or should I say revived ) the custom of celebrationg the 5 sekku, the seasonal changing days brought over from China in the Nara Period. Of course, the Chrysanthemum Day,  the Choyo no Sekku on the 9th day of the ninth month, was among them.

The prestige of the KIKU filtered  down to the masses during this time and chrysanthemum breeding became a popular activity. Japanese horticulturalists developed countless varieties, in various shapes and colors. 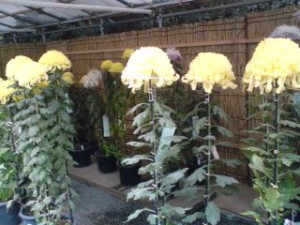 Kiku display at the Meiji Shrine 2008 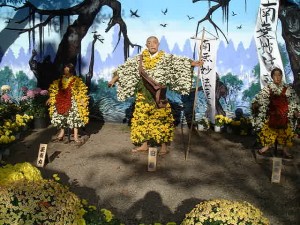 Of course, in poetry the KIKU came to be used extensively as a symbol of autumn and other things….. one of these being homosexual love ( the center of the blossom was thought  to look like an anus!). 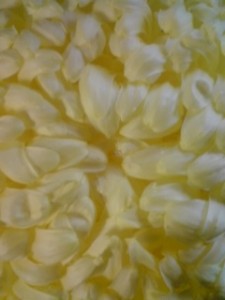 If you would like to make an interesting day trip from Tsukuba which would include chrysanthemum viewing ( including some amazing sculptures), as well as pottery shopping or making, why not head up, by car or train, to Kasama, where the Kiku Matsuri ( Chrysanthemum Festival) will be held from Oct. 16th to Nov. 23rd.

I will be there tomorrow and will post some pictures.

Here is some more info on how to get there by train: 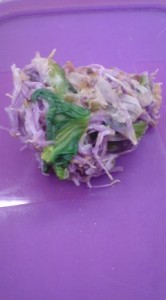 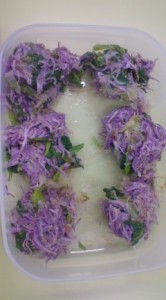 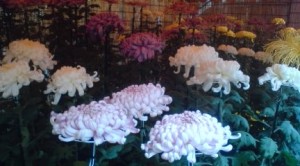 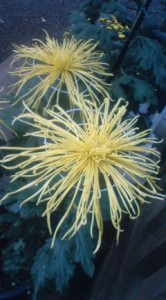 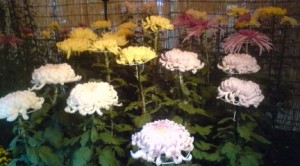 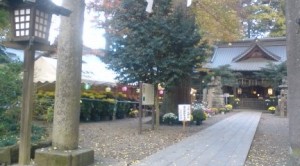 The worship hall of Tsukuba`s Ichinoya Yasaka Jinja with the chrysanthemum display on the left ( November 8, 2010)