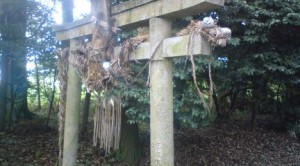 Thanks to their excellent public elementary and junior-high schools, as well as their convenient location, the Teshirogi and Matsushiro districts have long been among THE most sought after addresses for families thinking of building a home in Tsukuba. The abundant government housing established there more than 20 years ago, also means that this part of the city has a fair share of researchers and professors ( both Japanese and foreign) who work at Tsukuba`s national institutes and universities. Thus, one of the oldest enclaves for new residents(shin-ju-min), those who have moved to Tsukuba from other parts of Japan or from abroad, can be found in this part of the city, an ever-growing cluster of modern style homes, set amid the centuries old hamlets of Matsushiro and Teshirogi. 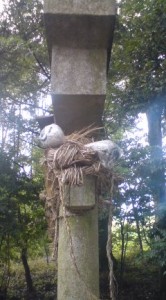 The gap between these new residents and the old can be striking- in language ( dialect), culture, and sensibility. And though this would be a huge topic upon which to elucidate, the difference between the two groups can also been seen in much easier to grasp ways.

For example, few of the NEW RESIDENTS (shin-ju-min), even those who have lived in the area for years, are aware of the existence of the small shrine, tucked away in an ancient grove on the western side of Route 408, which for centuries has been revered by the area`s native inhabitants- the O-Washi Jinja (大鷲神社), which directly translated means the Great Eagle (or Great Bird) Shrine. 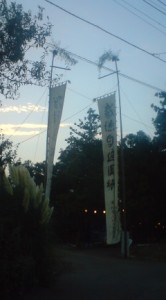 Thus, while the local villagers know that September 13th has always ( they say that its been 1,200 years! ) been the day of their MATSURI ( festival) centered around this shrine, most of the NEW RESIDENTS have never heard of the event. On the mornings of the 13th, when the signal fireworks announcing that the event will be ON that evening are launched, resulting in a series of loud blasts, the new residents merely mutter among themselves a muttered- what`s going on today? 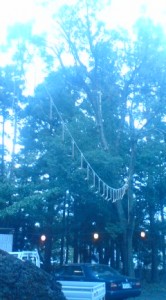 Fortunately, as the years go by, slowly,  slowly, more and more of Matsushiro`s new residents have become aware of O-Washi Jinja`s festival and its unique and surprisingly beautiful cascading- fireworks called TACHIBANA ( standing fireworks, or vertical fireworks). This year, (thanks in part to MY spreading the word) there was an unusual abundance of faces from the OTHER SIDE of route 408 illuminated red and blue festivals fiery glare. 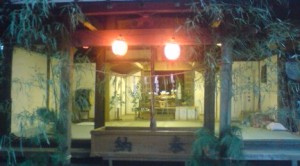 Wanting to learn more about the shrine and festival, I arrived a few hours before the seven o`clock starting time, to take some pictures and to ask some of the older men helping to set up some questions I had been meaning to ask.

You see, I had long been interested in this small shrine- mainly because of the unusual STRAW SNAKE which year round can be seen hanging atop the shrines concrete torii gate ( a new one is put up each November). I wanted to know exactly what it signified. 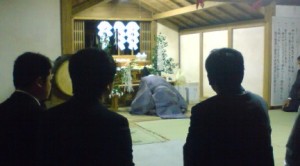 Male ujiko (氏子)- the shrine`s parishioners, inside the small worship hall of Teshirogi`s O-Washi Shrine. First they recieve the blessings of the priest and then they proceed to make offerings of sakaki leaves to the god of the shrine- Yamato Takeru

When I got there I found that preparations for the matsuri had been well underway. Two large banners had been raised on very tall poles at the shrines entrance to announce the event. The torii gate with the straw snake had been decorated with freshly cut bamboo leaves, as had been, I soon saw, the donation box in front of the worship hall, which had been opened wide with alters set up inside.

To the right of this small hall a tent had been set up, and many of the older parishioners had already been indulging in the alcoholc beverages which had been laid out for the occassion.

Most importantly, I noticed that the TACHIBANA FIREWORKS, the main attraction of the festival, had already been set up, and were hanging suspended from 3 or 4 long ropes which had been strung up between trees. 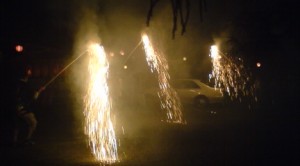 At 7:30, the tachibana fireworks begin!

I realize now that the day of the festival was a not a very good time for asking difficult questions. Many were busy, and those who were not and eager to talk- were drunk! One very kind and enthusiastic ( but plastered) gentleman expalined when I asked him, that the straw snake was the YAMATA NO OROCHI, the eight-headed serpent slain by the god Susanoo-no-Mikoto ( according to Japanese mythology).

This seemed unlikely to me, however, since this shrine was an O-Washi or (with another reading) an O-Tori Shrine, the type of Shrine dedicated to the god Yamato-Takeru, and not one of the shrines related to Susanoo-no-Mikoto , which are Yasaka, Hikawa or Tsushima Shrines.

The other, and greater discrepancy is the fact that this snake is a simple one-headed creature, quite unlike the terrifying beast of the myth. 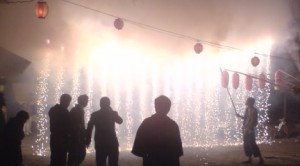 The Tachibana fireworks` cascade effect gets the crowd oohing and aahing!

I would thus like to suggest a theory of my own based on my reading of the history and origin of Japanese religion, and put forth the idea that this straw-snake is an extant example of a very ancient fertility symbol- which would be quite appropriate, since the local villagers have since time immemorial used this shrine to pray for fertility and good harvests.

It seemsThe fact that snakes molted ( shed their old skins) each year, was very impressive to the ancient Japanese and led them to believe that these creatures possessed tremendous life force, or could rejuvinate themselves each year.

It has also been suggested by certain scholars that the bloated conditions that snakes et themselves into when they swallow large prey, reminded the ancient inhabitants of these islands of PREGNANT WOMEN and that accordingly snakes were worshipped as fertility symbols.

Also I have read the works of  some scholars who sugges that the Japanese word for god- KAMI is connected with an ancient word for snake- MI ( 巳).

Moreover, I was also surprised to read in the HITACHI-NO-KUNI NO FUDO-KI, the ancient compilation of legend and lore from this part  ( today`s Ibaraki Prefecture), that in NIIHARI (which is the next town over from Tsukuba) there were many gods- with gods ( in th text) written with the characters 大蛇, which could also mean large snakes!

The same ancient text also mentions that in Namegata ( situated not far from Tsukuba, between Lake Kasumigaura and Lake Kita-Ura), that a god had tranformed itself into a snake. The pond in which this god was said to have live can still be seen today, with an appropriate signboard telling the tale.

From another angle, since the shrine is dedicated to fertility and CROPS, it would also not be strange to have adopted a snake as your symbol- since snakes eat plety of mice!

Anyway, I think the exact meaning and origin of O-Washi Shrine`s straw snake still remains to be clarified. I will try to dig further into the mystery the next time the new snake is made- on the first Day of The Rooster in November ( which is the god of the shrine, the great warrior Yamato Takeru`s memorial day).

Certainly, the local residents have a great pride in the festival and they were  trying to emphasize just how old it was as compared with other events in Japanese history ( and if the shrine were really as old as they say, it also made it seem reasonable to me that some ancient forms of worship-such as the snake- could persist unchanged out here in the isolation of was once mostly forest).

At 7 pm sharp, the signal fireworks ( aizu-no hanabi) were launched again. The event was on! Sporadic fireworks would be fired into the air through the duration of the event, and a surprisingly large crowd ( more than 100 people?) soon gathered. They were not disappointed. The TACHIHANABI were lit and the air was soon filled with excitement ( as well as smoke!) as the precincts of the shrine were set aglow and abuzz by the strings of giant sparklers suspended between the trees. 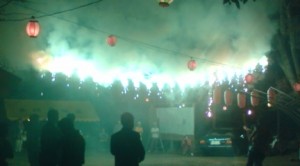 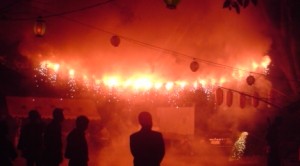 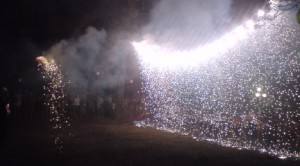 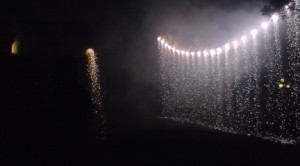 I left when the TACHIBANA died down and did not wait for this years special guest dance performance. I didnt want to spoil the mood with any quiche. I cycled off into the darkness of the surrounding tobacco fields, now devoid of leaves. With the smell of gun-powder still tingling my nostrils and the brief moment of fiery excitement still perfectly fresh on my mind, I realized how this special event was helping to bring together the Matsushiro area`s residents- OLD AND NEW, to form one community.