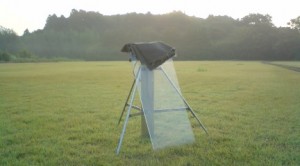 I found this fireworks launcher, set up and ready to go, by the ruins of the old Konda Castle at 5:45 AM. The technician was getting ready to fire two shots at 6AM to announce that todays sports festival (UNDO KAI) will be ON at Sakura Junior High School. At 6, similar blasts could be heard resounding all over Tsukuba, for each schools with festivals today 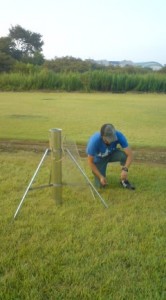 Getting ready to lauch two shots 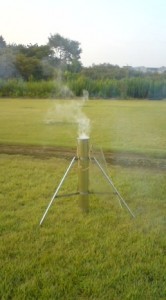 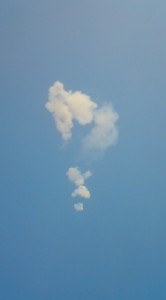 Bursts of smoke high up in the sky. Two shots are fired, with each shot giving off 5 bursts 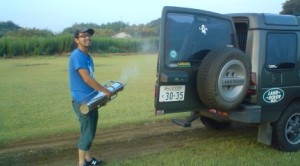 after a job well done, Kato-San of the Yamazaki Enka Fireworks Factory heads for home and some sleep. His next gig will be this Sunday night at a fireworks event in Tsukuba`s Hakke neighborhood 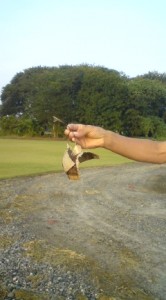 The Aizu no hanabi`s debris is considered a good luck charm. One local man was waiting around to get a chunk to take home- Sept 11th 2010 6AM

One of the annoyances of country life in Japan is occasionally being awakened abruptly by a series of thunderous blasts, the origins of which remain a mystery to most foreign residents and even to those Japanese who grew up in a big city. Here is a scenario which you might relate to from personal experience. You are in a sweet, anxiety-free Sunday sleep. You are most likely enjoying some highly cinematic early morning dreams. Then…

Your inner visions instantaneously crumble away and your mind reluctantly clicks into a dazed consciousness. You think-what the?…

You groggily open your sleep-glued-eyes and try to focus on your beside clock. 6:00AM. You mutter an expletive.

A chorus of frantic barking now rises up as the neighborhood dogs join in on the general sense of ire. No, you are not going to get back to sleep for a while, if at all. Darn.

Just what ARE these sonic intrusions into our well-earned slumber. People’s sense of curiosity seems to be put to rest by their own assumptions, and usually no further inquiries are made about the disturbances. There are some perfectly logical explanations that I have heard from those with whom I have breached the subject. The most common notion is that the explosions are set off to scare away the early birds from the crops in the fields. Others assume that they are wake-up calls for farmers, or military exercises. My friend from Kyoto thought his apartment was unluckily situated next to a fireworks factory which was testing its products.

These are all reasonable guesses, though they are all off the mark. What can be heard are in fact signal fireworks（aizu no hanabi 合図の花火）announcing to the community that a traditional festival or Undoukai(運動会), school sports festival is ON as planned for that day. From an age before cell-phones, email or even telephones were available, three blasts were used to signal that everything was going on schedule, while one 1 blast meant postponement due to bad weather. In the present day, however, this custom has been changing, and usually there is only a signal fired when an event is ON. The reason for this is economic, as schools and villages must hire professionals to set off the signals, as only licensed pyrotechnicians are permitted to do so. This can cost a pretty penny, with one shot being between 5 and 10 thousand yen. With budgets running low, festival committees have started getting stingy. Still the school just near my house (unfortunately) seems to have a hefty budget, and spares no expenses when it comes to signal fireworks, setting off 2 shots with 5 blasts each!

New resident Japanese seem to be more intolerant of these loud noises than foreigners, and their complaints have put an end to the custom in several schools, including Ninomiya Elementary School. I can sure understand the angry feeling. And though I have always tried to champion the preservation of local customs, on this issue I say PLEASE STOP MAKING THAT RACKET!

Well, now that you know the facts. All I can say now is that there are three possible ways that you can act next time you hear the AIZU NO HANABI. Try to get back to sleep, call the city office to complain, or go find the event later in the day and enjoy the festivities!