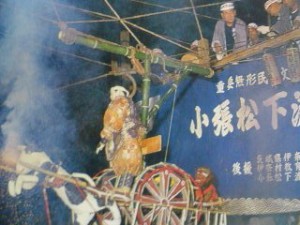 Though the greatest fireworks event around here (and one of the best in all of Japan), the Tsuchiura Hanabi Taikai, takes place in autumn, for most Japanese, fireworks mean summer and summer means fireworks. It seems that on almost any July or August night ,  the crackle of HANABI can be heard somewhere off in the distance. 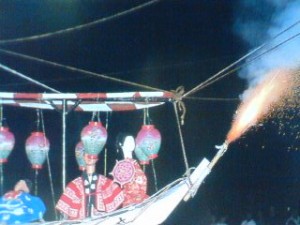 Fire shoots out of a small, puppet-bearing boat during Tsunabi

And though now fireworks displays are mostly considered a summer night`s  ENTERTAINMENT, the use of  fire (and gunpowder) has long had a RELIGIOUS function in Japan, as in Shinto, fire is believed not only to purify but also to attract the KAMI (god/ gods). Fire  plays an important role in Buddhist ceremonies, too ( even the relatively recently established Tsuchiura Fireworks Competition, first held in 1925, was created ostensibly to console the spirits of fallen pilots- Kasumgaura has a long connection with aviation in Japan). 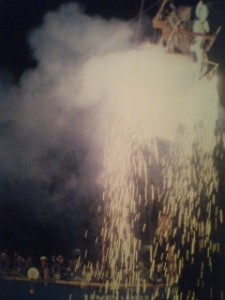 Tsunabi Puppets above the sparks and smoke

In Ibaraki Prefecture it is still possible to observe (and take part in) a few traditional  fire festivals, involving rituals in which fire or fireworks play the main ceremonial role. I have already written about the mid-winter FIRE-WALKING CEREMONY (HI WATARI, 火渡り） held at the Mount Kaba Shrine in Makabe near Tsukuba. But now, in late summer, deep in the fireworks season, I`d like to tell you about this area`s most characteristic (and oldest) ceremonies which involve fireworks- Ina Machi`s ( now Tsukubamirai-Shi) TSUNABI events, in which a combination of puppet theater and fireworks are used to pray for fire prevention, good harvests and originally- VICTORY IN BATTLE. 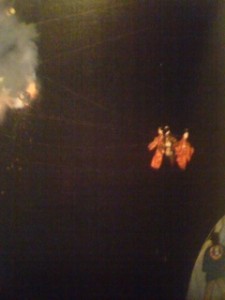 Each year for the past 400 years ( with some exceptions, including the war and immediate post-war period), Tsunabi ceremonies have been held in Ina Machi, now  part of Tsukuba Mirai City. In recent years , the dates have been set as August 23rd and 24th. There are two surviving schools, with quite different styles, the Takaoka-Ryu, which does its thing on the 23rd, and the much older Obari-Matsushita-Ryu, which takes the stage on the 24th. Though these events take place at different (though very near to each other) locations, both venues are ATAGO SHRINES (愛宕神社), which is indeed appropriate since these are dedicated to the God of Fire.

The event  on the night of the 24th will be at the Atago Shrine in Ina Machi`s Obari neighborhood, which was founded at the end of the Muromachi Period ( in the 16th century). The Tsunabi ritual is performed as an offering for fire-prevention and abundant crops and has been designated an Important Intangable Cultural property (as has been the ceremony in the Takaoka neighborhood).When it was first conceived, 400 years ago by a local samurai ruler, it was intended as a ceremony to help ensure victory in battle. The secret of mixing and preparing the gun-powder was taught to the Ohashi Family, local farmers farmers, who have passed it down over the generations ( in the case of the Obari-Ryu).

Until the Second World War, there was actually a Tsunabi rice Field, the annual proceeds of which went to pay for each years Tsunabi.

The highlight of these ceremonies, which also involve processions of portable shrines, floats and other typical MATSURI (festival) activities held earlier in the day, is a puppet show, involving large mechanical dolls, which travel down a length of rope, all the while spewing out fire and smoke, as the music blares and the narrator tells the story. And though it can be quite crowded, the performance  short, and your view most likely obscured by smoke, getting there early and reserving a good spot for the show, can prove to be well worth it. I find it  magical.

There also seems to be a tsunabi event in Aichi Prefecture in Central Japan, but that`s about it. So these events in Ina Machi ( Tsukubamirai) are just another of those things which make Ibaraki Prefecture special. 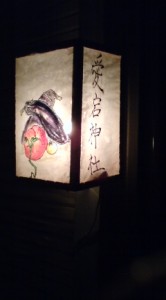 The Atago Shrine is about a 20 minute walk from the Mirai-Daira Station on the TX line. The Tsunabi is scheduled to start at 7pm but I would get there earlier. Another interesting feature of this event is that most of the houses in the Obari and Takaoka neighborhoods make home-made lanterns which they display at their entranceways.

and my posts about the fire-walking

and a Buddhist fire ritual-

and for keeping up to date on all the traditional events in and around Tsukuba make sure to keep checking M. Takahashi`s invaluable home page: