Tsukuba`s Indefatiguable Bird-Chasers are Back Again! This Time in Force ! Come Watch ( and hear) Them in Action, as they help keep our groundscapes clean! 19 August, 2010 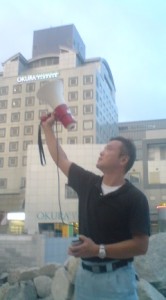 Using amplified distress calls to drive away the starlings that come to roost at Tsukuba Center ( Aug. 18th 2010) 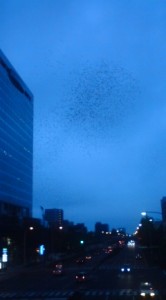 Summers  have always been NOISY in Tsukuba with the incessant buzz of cicadas and other insects. But in recent years the mid-August cacophany heard around the Tsukuba Center  has become nothing less than frightening!

Yesterday evening I stepped out of the Okura Hotel’s lobby and out onto the road. Naturally, the cicadas (semi) were chirping and droning, and this made me feel as if I had ringing in the ears. Then suddenly, from up in the sky and towards the south there appeared a black swarm, and then another and still yet another dark mass. These were flocks of Grey Starlings (mukudori) coming to roost for the night around the Center. I stood mesmerized by their interweaving which created visual effects more fascinating than any kaleidoscope or lava lamp.

As the starlings started to settled into the trees, the cicada-driven noise more than doubled its volume and you could virtually feel the soundwaves vibrating against your body.

Then, suddenly, another sound rose up above the rest of the din.  Extremely loud and like something out of a nightmare. If I hadnt known better I would have thought I was walking past a slaughterhouse, or that Godzilla, Gamera, Mothra and all their Japanese movie-monster companions had descended upon Tsukuba for some final decisive battle.

This  is exactly what I imagined the first time I encountered this horrifying racket 3 years ago, and it was probably what was going through the minds of all the bewildered first-time hearers who were standing outside with me, looking around in fright. 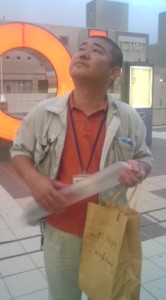 This year, however, I knew better. It was the BIRD-CHASERS! They were back at it again, fighting the never-ending battle of keeping the starlings ( mukudori) AWAY from Tsukuba Center. They go about their task by making very loud and very ANNOYING noises- the highly amplified distress call of the Starling itself ( blasted out of mega-phone-like devices) and more humourously ( and economically), by rubbing on balloons or inflated plastic umbrella bags to make a distinctive screech-like sound, highly irritating to both the birds and humans ( but especially to the humans, it seems!)

Why do the folk at Tsukuba Center  want to get rid of the birds move is something easy to understand.

Besides the horrible racket the birds make, their droppings are prodigious and the ground along the pedestrian square area between the hotel and Nova Hall and then the path stretching towards the library  becomes pasty and difficult to maneuver. Not pleasant at all, especially when you are wearing sandals. In he festering heat of August, this situation is probably not very good from a hygienic standpoint either.

Eager to see my old friends the BIRD-CHASERS, I forgot all about the humidity for a moment and sauntered up he stairway to the center`s upper plaza. Looking around for familir faces, I was surprised to find that instead of the 2 or 3 guys usal from the city office, armed with megaphone , plastic bag and their bare hands ( used for vigorous clapping), there was a large contingient of men, all armed with the traditional weapons of the trade, spread out all over the area. Re-enforcements had been brought in! 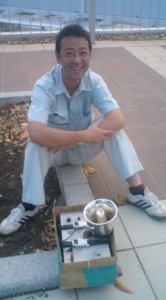 That IS a good thing, since in past years you couldnt help but fell sorry for the poor guys who had to CHASE after flocks of birds as they moved from tree to tree. This year, each chaser waited for a flock to come his way, and when one did they proceeded to do their thing. I would even say tey looked lie they were having fun, each of them trying, it seemed to suppress a boyish grin. 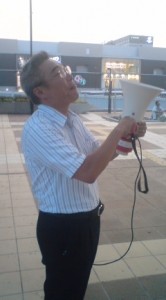 Photographing  and speaking with these gentlemen, I found that instead of being from the City-Office, they were mostly from the company UR, which manages the Tsukuba Center Area, and his, of course , involves keeping it clean.

Watching one of the bird-chasers begin to tire as he rubbed on a balloon, I joked that its  better to rub ( the ballons) than have to SCRUB the poop off the walkways!

For those of us bystanders who had gathered to watch , we could not help by OOH and AAH as the starling flocks interwove and mingled, and then tred to alight and test out the safety of potential places. The noise made by the BIRD-CHASERS soon had them take to the air again, taking off in search of a quiter placeto settle down for the night. 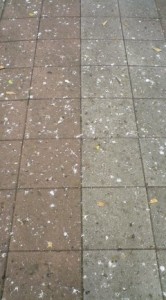 Anyway, this week you sould still be able to enjoy watching the interweaving flocks, and the spectacle ( both visual and acoustic) of the bird-chasers trying to get rid of them. It really is something to behold ( and behear!)

Ironically, even with all the heroic efforts of the bird-casers , the birds do NOT  move very far away, and in fact, when I came back to the same spo later at night, I found that the trees at Tsukuba Center were all full of starlings!

Why do the starlings like to roost in the center of the city? no-one is really sure, but  I guess it makes them feel safe from predators. They must also prefer  trees  lined up neatly in a row.

The cicadas and starlings will be keeping things noisy for a few more weeks. If you too would like to hear the buzz and watch the starlings interweave come to the bridge between Right-On and Days Town, at dusk.

The bird-chasers will be the upper-plaza out-side the Okura Hotel, between the station and Nova Hall, every evening for the next few weeks at arund 6:15 PM. You cant miss the racket! 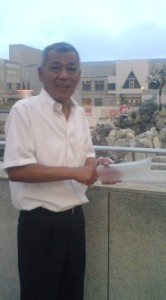 For my original article on my first enounter with the bird-chasers read:

and more on the birds found in Tsukuba: