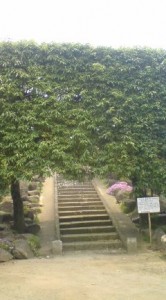 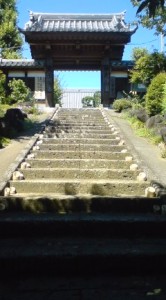 After dark every August 11th, residents of Hanamuro, one of the  traditional Hamlets which lies within the borders of what is now Tsukuba City, carry offerings of rice under the Kakuoji Temple`s distinctive shrubbery arch, and then up its candle-lit stone stairway and through its main gate. They then turn left and head to the small wooden hall dedicated to the Yakushi Nyorai- The Buddha Of Healing and Medicine, to pray for good health. Doing so on this day is believed to be especially good for the eyes.

A visit to Kakuo-Ji is worthwhile ANYTIME ( if you live in Tsukuba), and a visit on the night of the ceremony is even more so.

To get there turn to the north at the Hanamuro Intersection ( that means to the left if you are coming from Tsukuba Center) and then make a right just after you pass the Hanamasa Store. Then again turn right ( after about 200 meters) and head down into a small valley ( which seems to have been forgotten by time).  The temple`s gate will be on the left. You cant miss it.

Dont expect anything spectacular. Its just a quietly solemn, though beautiful, neighborhood ceremony. 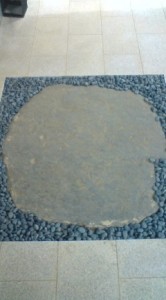 The Mondo Ishi Stone, on which it is said that would-be disciples were interviewed by the abbot before being accepted or turned away 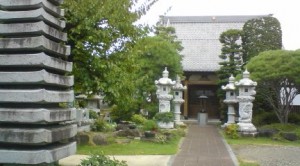 The Main Hall of Kakuoji- once a temple of the Shingon Sect, later converted to Soto School Zen 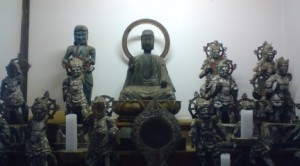 The Yakushi-Nyorai surrounded by guardian deities- inside the Main Hall of Kakuo-Ji. The central image here is moved to separate, smaller hall for the Yakushi Mando Ceremony on August 11th