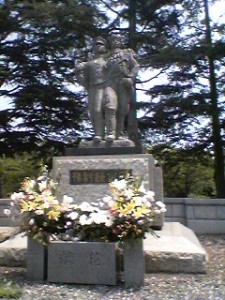 The vegetation is closing in all around you, while the shrill droning of cicadas and other insects pounds in your head. The heat-waves radiating off the ground and buildings make it seem as if the air itself were a living, throbbing organism. August is when nature in Japan is most pulsatingly alive. Ironically, it is also the time when special consideration is given to the Dead. Since ancient times (records date from the 6th century) the 13th day of the 7th lunar month (our August) has been a time to light fires (lanterns these days) for the O-Bon Festival (the origin of the expression bonfire?). These were used to guide and welcome back the spirits of departed ancestors who are believed to return to their native homes for three days. These visiting souls are consoled with sutra chanting, offered food, drink and incense, and entertained by the community with Bon-Odori dancing (which is never TOO interesting so as to make sure that no spirits would want to overstay their welcome!). On the evening of the 16th, a fire is lit again as a send off, often accompanied by offerings which are cast onto a river or into the sea. It is interesting that though the dates of most Japanese traditional events have been changed due to the introduction of the Western calendar (see my article: Lunar or Solar?), most Japanese outside of Tokyo still keep the O-Bon celebration in August, now the 8th month (this could possibly be because farmers would have been too busy in July).

In addition to the festival for the Returning Spirits of the Dead (O-Bon), there are three more days in August connected with remembrance, all of them related to the war that ended sixty three summers ago.  Each national or cultural group with its own  identity utilizes whatever tools it has at its disposal to embed its own particular view of history into its members. In Japan, the powers that be have naturally used this country’s comprehensive education system, the mass media, and public holidays and monuments to effectively shape the way most people remember the war and think about themselves and others.  What has become stressed in Japan is that THIS country and its citizens suffered UNIQUELY during the war.   August 6th and 9th are reserved for ceremonies commemorating the horrors of the atomic bombings of Hiroshima and Nagasaki (respectively). August 15th, which by strange coincidence is also the peak day of O-Bon, is the day which marks the end of the war (another reason to have O-Bon in August) and is most famously commemorated at Yasukuni Shrine, where throngs of visitors come to pay their respects to all soldiers who died in service of the emperor.

For at least half a century, after WWII, people who grew up in the English speaking(and many other countries of the) world  would instantly think of Pearl Harbor and kamikaze pilots if JAPAN were mentioned in a word association game. That is because some countries (especially the US) use the story of their successful fight against tyranny in Japan as a way of building a positive and effective national identity. Americans are taught of the treacherous sneak attack on their sleeping sailors in Hawaii (wait, didn’t  George Washington use sneak tactics to defeat the British) and the fanatically determined foe who had no regard for human life (kamikaze pilots) which justified the dropping of the atomic bombs, which also saved countless US lives (wait, wouldn’t that mean that Vietnam, fiercely attacked without provocation, would have been perfectly justified in nuking the US, and anyway how can the incineration of 100,000 civilians and the fatal irradiation of that many more ever be JUSTIFIED). 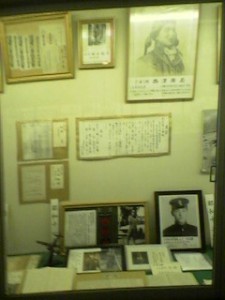 Like many, I grew up hearing and reading about the war. For Americans, the story of the heroic struggle against dictatorship and the eventual bringing of democracy to Japan (through its total destruction) was a point of national pride and an important part of the national consciousness. For me it is not surprising that George W. Bush,whose father fought in the Pacific,would want to carry out a similar GOOD FIGHT(in his opinion) in the Middle East, as he was raised in a generation even more full of the myth of the BENEVOLENT, democracy bringing effects of American military force ( though the US DID in fact bring democracy to Japan and Germany after the Second world War).

Growing up in the 70`s,before ever imagining that I would one day live in Japan, I learned of all the great battles, major figures, and intrigues of the war.

Arriving in Japan to study at university  first exposed me to the fact that different countries or groups talk about the same story in very different ways.  While I knew all the major battles and many details of what the Japanese often call The Pacific War, people my age seemed to know almost  nothing at all. And since the topic hardly ever arose (except with my 85 year old friend Toshiko who lost her husband in the war), I too, started to forget about it, or certainly not dwell on it.

For that reason it took me a few years to realize that Tsuchiura City and Ami Town near Arakawa-Oki Station played a major role in Japan’s Imperial history. While what is now Tsukuba City was mostly forested and very sparsely populated (because of a lack of water resources) Tsuchiura and Ami thrived, as Kasumigaura was used for training the Imperial Navy’s pilots. With  huge bases (which still exist in a much diminished form having been broken up for industrial use) and thousands of soldiers, sailors, pilots and technicians. Business boomed.

Admiral Yamamoto Isoroku, the reluctant planner of the Pearl Harbor attack lived in Ami at what is now part of Ibaraki University (I found out about this because I was teaching there). The pilots who  participated in the monumentally successful attack trained on Lake Kasumigaura. Tsuchiura`s Sakura Machi entertainment areas’ restaurants were used to celebrate. For a while,Thing were real good.

Unfortunately for the Japanese armed forces the US soldiers turned out to be the REAL fanatical fighters. Remember, Japan`s great triumph and entrance into the BIG BOYS club of Imperialism was its defeat of Imperial Russia at Port Arthur in the Russo-Japanese War of 1905. After suffering early, stinging defeats, the Czar decided that it just wasn’t worth fighting anymore and to let the Japanese have what they wanted. I guess the Japanese commanders thought the same would happen with the US after heavy early losses. They could never that imagine boys from Kansas, Ohio, Vermont, etc., would leave their comfortable lives and come out to the jungles of the South Pacific and fight to the death.

By 1945, Japan was in a desperate situation. Losing battles everywhere, and more importantly, running out of equipment and resources.Japanese cities was completely exposed to American bombers who used weapons intended to cause the most possible destruction and death.  In October 1945, the Special Attack Units(tokkotai) were put into action. These were the Kamikaze pilots, boys trained for a few months and then put on a plane loaded with explosives and enough gasoline to get to their targets.

These programs were first initiated in Ami on the shores of Lake Kasumigaura at a school called YOKAREN(予科練）. There is still weapons school on the site which belongs to the Japanese Self Defense Forces and on its grounds is a museum commemorating the boys who died flying missions,especially suicide attacks.

Anyone who is interested can visit the YOKAREN memorial museum. It is free of charge and open everyday until 4:30. The soldiers at the gate (women, each time I’ve been there), are friendly and security is easy-going. Only one person in your group has to write his or her name (no id check).  The weapon school campus is sprawling and not a soul can be seen, making it a very peaceful place. You walk to the museum from the gate and pass by some old pre-war buildings and a large display of armoured vehicles which lines the path.

Inside the memorial museum are the photos, belongings and last wills and testaments of more than 1000 boys, mostly between 15 and 20 years of age, who gave their young lives trying to stop an attack on their country and protect what they were taught they had to: the Emperor.It seems most were country boys,probably from poor families,many of them local. 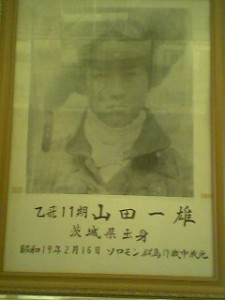 No matter what you think about the Special Attack Forces, you will probably have to FORCE back the tears when reading the letters these boys wrote to their parents.These show a surprising variety of content.

As there is no English here, if you cannot read Japanese well, you should bring along someone to translate.

Most Japanese people in Tsukuba do not know about this museum, and naturally most foreign residents don’t either. Most people DO know that Ami is the site of Japan`s first ToysRus outlet(times sure have changed ). To get to the YOKAREN, drive past the big toy store and the army base until you get to the lake. Look for the entrance to the RIKUJO JI EITAI BUKI GAKKO（陸上自衛隊武器学校)

During this season of remembrance, if you have the time, maybe you should head to the shores of Lake Kasumigaura,  think about the past, war, and WHAT IT’S ALL ABOUT. There are numerous places in Ibaraki which have had great national impact, but this flight school played a role on the stage of world history and left its mark on our language and culture. it is about a 20 minute drive from Tsukuba Station.

By the way, the Hotel Edo-Ya near Mt Tsukuba Shrine used to host the last parties for the Kamikaze Pilots.

They still hold an annual reunion for those who survived.