Last Night`s Full-Moon was the Bon-Moon (Bon no Tsuki, 盆の月), for those who still celebrate the ancient O-Bon Festival in its MOST AUTHENTIC way 24 August, 2010 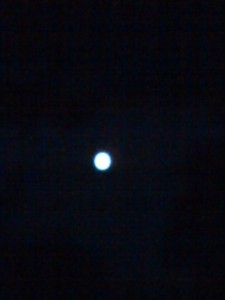 I have already told you in the pages of Tsukublog, how  in  Tokyo and in or around Yokohama, the ancient O-Bon Festival  in which the spirits of  ancestors  are welcomed  back home and entertained, is celebrated from the 13th to the 15th (or 16th) of  JULY.

I have also gone  on to tell you that in most of the rest of Japan, the same festival is celebrated  between the 13th and 15th ( or 16th) of AUGUST.

So you might  start feeling even more confused when I tell you, that for some people, in fact those who still celebrate the Festival for Ancestors in its MOST AUTHENTIC WAY, this year`s O-Bon  celebrations started on the evening of AUGUST 22nd, when the ancestral spirits were  guided back to their homes where they will stay until the morning of the 25th, when they will be sent off , back to the OTHER WORLD. Today is the main day of the festival as heralded by last night`s FULL MOON- the Bon no Tsuki, around which the Festival  had traditionally been celebrated.

You see, since at least as far back as the reign of the Empress Suiko ( during which the occurence of Bon ceremonies was first recorded in the late 6th century AD) and until the Japanese calendar was CHANGED from the traditional Luni-Solar calendar to the Western (Gregorian) calendar by the internationalizing and modernizing Meiji government of Japan in 1873, the Bon rites were held each year from the 13th to the 16th of  the 7th month according to the old calendar.

One important characteristic of that calendar is its close connection to the waxing and waning of the moon, with the eve of the 15th of each month  always being  a FULL-MOON ( with the calender a new day began at sundown!). That means that  the period during which the ancestors were believed to come back home was always centered around the full moon, since the MAIN DAY of the festival has always been the 15th.

When the Meiji government ordered that the calendar be changed, however, in order to facilitate Japan`s integration with the rest of the world, the O-Bon Festival started to become disconnected from  its roots. Yes, The festival was still to be celebrated in the seventh month, from the 13th to the 16th, but now this was to be the 7th month according to the NEW ( Gregorian) calendar- which is July, meaning that it would fall approximately 30 earlier than it always had been ( since with the Gregorian Calendar the first month, January, begins about a week after the winter solistice, while in Japan the first month traditionally began between 25-45 days after the solistice).

It also meant that the link between O-Bon and the full-moon would be severed.

And though even back then in 1873 this did not matter much to the people in the big cities of Tokyo and Yokohama who  could easily make this change,for the farmers in the provinces this approxiamately 4 week difference was huge. The middle of July was just TOO BUSY of a time back then, with the weeding and dealing with pests, to take the time off to celebrate a proper O-Bon.

There are still those few, however, who out of respect for tradition, and the understanding that since ancient times, long before the Buddhist Urabon-e ceremonies were introduced  to Japan in the 6th century, that the Japanese have made offering to their ancestors in connection with the phases of the moon, especially the beautiful moons which can be seen in August, September, and October ( which would also coincide with the times of year for beseeching the ancestors spirits to help bring about abundant harvests).

You might think Im a LUNATIC, but walking outside last night, bathed in the mysterious glow of the Bon-Moon, I realized how much has been lost by calendar change. O-Bon should not be celebrated on ANY OLD Day or NIGHT- it should be centered around the  Bon no Tsuki, the first full moon of autumn! When else could Bon-Odori dancing seem so magical? 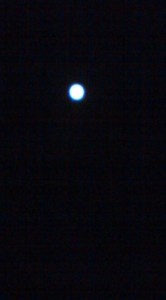 The nearly full moon ( Ju-san ya) on the night the ancestral spirits are welcomed back home ( MUKAE-BI). This year on the night of August 22nd

You will be very surprised to find that almost no-one that you speak to in Japan these days is aware of O-Bon`s connection with the full moon.

There are still, however, a couple of neighborhoods in Tsukuba which  celebrate O-Bon at the  time of year it had always been celebrated- around the first full moon of autumn. Check M. Takahashi`s Traditional Events in Tsukuba Page for more info:

Here is what I wrote 2 years back when the full moon DID actually fall on the eve of the 15th:

and on a related topic- Japan`s autumnal moon-viewing customs ( Tsuki-mi):

I`ve also written before on the traditional Japanese calendar: