Imperial Visits Have Almost Become A Regular Part Of Life In Tsukuba 4 August, 2010 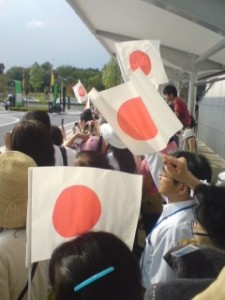 Seeing off the Imperial Couple at Tsukuba Station- August 2nd, 2010

For Japan`s Emperor Akihito and his wife Empress Michiko, Tsukuba is surely a place of fond memories. Twenty-five years ago, while still  Crown Prince and Princess, the couple came up here amid all the excitement of the 1985 Tsukuba Expo ( Tsukuba Banpaku), and stayed overnight at the then newly constructed Tsukuba Center Building, in at what was then the Dai-Ichi Hotel (now the Okura). With the flurry of foreign dignitaries and all the truly interesting pavillions and performances at just the time in post-war history when Japan had finally jumped out onto the international stage as an economic and scientific powerhouse, the still youthfull husband and wife and their children seemed to be genuinely bubbling with energy, enthusiasm and excitement, when one looks at the photos taken at the time.

And something surprising that I JUST found out !  Before the Expo, and even before the construction of the Dai-Ichi Hotel,  the Crown Prince and Princess ( now the reigning Imperial Couple), had been to Tsukuba several times, to visit research Institutes, and actually stayed overnight at the Sunroute Hotel ( now Hotel Rout), a BUSINESS HOTEL which sits along the Tsuchiura Gakuen Road!

Memories of those good old days, are probably among the reasons why the  The Emperor and Empress have made so many visits to Tsukuba over the years since Akihito ascended the Chrysanthemum Throne. In fact, they have been here for a visit for the last three years in a row!

And when they do come for a visit, usually for attending a scientific meeting or having a look at some of Japan`s latest technologies being developed at Tsukuba`s various scientific research institutes ( all these probably just good excuses to make a visit here!), they always make sure to have lunch, and a rest or even an overnight stay, at the Okura Hotel, where they stayed, as a young family in their prime, a quarter of a century ago. 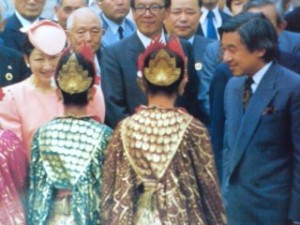 That is why you should not be surprised if sometimes you might find that there are small groups of police at all corners of EVERY intersection along some roads, and also other officers dilligently poking through the roadside bushes and checking under the man-holes. This just probably means that the Emperor and Emperess are coming up for another visit ( though it could also be, though much less likely, another foreign or domestic dignitary)! 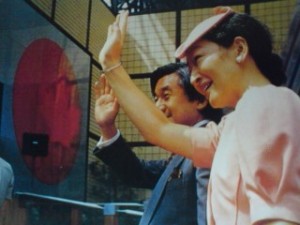 The reason I am writing this little post, is that just this past weekend ( Aug. 1st and 2nd), the Imperial Couple were in Tsukuba once again for an international meeting, and probably more excitingly for their Majesties,  a visit to JAXA ( The Space Center) to be briefed on the surprising return of  HAYABUSA, Japan`s long-lost space probe.

Since I had business on both days at Tsukuba Center, I was lucky enough to be part of the small crowds who came out greet the Tenno Kogo Ryo- Heika ( as the Imerial Couple are formerly called in Japanese). I emphasize small because considering the immense and tear filled with emotion crowds which would have come out for such an occassion in past ages, there were very few people and the mood subdued ( though excited). Of course, a part of the reason for the small turn-out of well-wishers was the intense heat, for in order to catch a glimpse of the Imperial Couple as they emerge from their limousines you have to wait for wait for a while, behind police lines, usually in a place with no shade.

Those who did make the long, hot wait, the other day, were not disappointed. Let me describe how things progressed. I was actually up at the Azuma Community Center at 3pm, and looking out the window to the street below, I saw that the area had been closed off by the police. I pointed this out to my students who seemed to get edgy with anticipation, and indicated that they would like to take a break during our class to greet the Emperor and his wife. This meant that we would have to go downstairs and outside, since it is considered RUDE to view the Imperial Procession from above ( just as it is not acceptable to few a Matsuri Procession of O-Mikoshi from above).

Getting down to street level, the police, who seemed a bit knocked out by the heat, told us that the Emperor and his entourage would be heading back to Tokyo by train ( The TX) and that we should go to the station.

Making our way through the steamy air, our eyes almost shut tight due to the glare, we were told to wait opposite the station entrance, behind a rope which had been set up. The police told the small crowd ( surely less than 100) that under no circumstances should the rope be crossed. The crowd responded in unison- Hai wakarimashita (We understand)- and waited patiently, shading themselves with the Japanese flags which had been distributed to us.

The heat and discomfort was forgotten when a helicopter appeared overhead and the motorcycle at the head of the procession came into view. The motorcade drove passed us slowly and the couple, in separate vehicles, were seated so that they could be seen, and wave to the well wishers. as this happened the paper flags shook, buzzing like the big eyes of manga characters do to show emotional intensity.

Across the street, the Emperor and Empress got out of their vehicles and stood for a moment fully exposed to the summer heat. They smiled and waved to us, and then turned and spritely headed for the coolness of the underground station. They were followed by a comically long entourage.

The crowd dispered slowly. People showed each other the photos they had taken. Others commented on how good the couple looked.

The policemen, dripping with perspiration, were relieved that everything had gone smoothly, and thanked us for coming out and seeing Their Majesties off.

Another Imperial visit to Tsukuba had successfully come to an end.

And Im sure there will be more such visits in the future ,with the TX making travel so convenient, and the Emperor`s avid interest in science and technology.

Still, I believe that another reason the Emperor and his wife will be back, is that our town has a special place in their hearts. 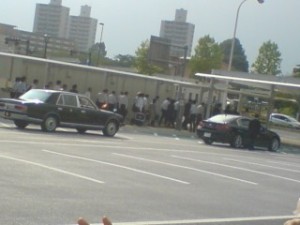 The Emperor`s long entourage disappears into the station

Afterward: I later heard from a reliable informant that the Imperial Couple were at Doho Park on Sunday night PLAYING TENNIS. This is quite fitting for them as they in fact met, more than fifty years ago, at the summer resort of Karuizawa- playing tennis!

And something surprising that I JUST found out !  Before the Expo in 1985 , and even before the construction of the Dai-Ichi Hotel,  the Crown Prince and Princess ( now the reigning Imperial Couple), had been to Tsukuba several times, to visit research Institutes, and actually stayed overnight at the Sunroute Hotel ( now Hotel Rout), a BUSINESS HOTEL which sits along the Tsuchiura Gakuen Road! I heard from two very reliable sources, that their friends, researchers, were asked to be tennis partners for the then Crown Prince and Princess. You can imagine how nervous they must have been, thinking: should wee play all out, or as in Alice in Wonderland, should we let Their Highnesses win?

For stories of more  encounters with Japan`s Imperial Family in Tsukuba and other places, read: