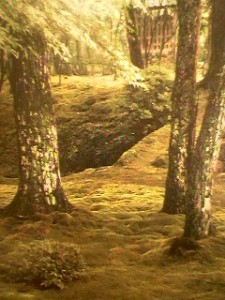 Most days during Japan’s month long rainy season (tsuyu), are overcast and damp, even when there is no actual precipitation. When it IS raining, it is as if your town or city has been transported into the shadowy depths of a thick, wet , forest. It can stay like that for days. For this reason, Japan is a veritable paradise for MOSS (koke苔), which thrives in such conditions. Taking a June stroll, umbrella in hand, within the precincts of some old shrine or temple is like an in-depth tour into the WORLD OF GREEN, with  mosses of varying degrees of verdure growing on stones, tree trunks, or the ground, forming delightful combinations. 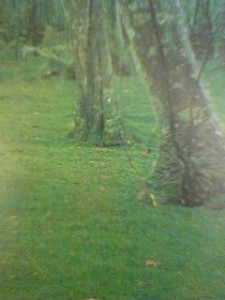 It is clear that the darkness of the rainy season and the deep warm shades of moss have had a huge impact on Japanese aesthetics. For example, compare the Buddhist temples or clothes from the brighter lands of India or Thailand, with those of Japan. In the sunnier countries they  often have bright, bold or shimmery colors and surfaces, which are necessary to keep them from being  washed out by the brightness of the sun. In shadowy Japan, different , darker , colors, more natural and earthy , came to be utilized and loved. Moss and moss green have been an important part of this sensibility. This can be seen most clearly in Japanese gardening and landscaping, the cultivation of miniature trees (bonsai) and in fabric design.

There are several temples which are actually famous for their moss gardens, including Saiho-Ji and Gio-ji in Kyoto. Nearer to Tsukuba is Myoho-Ji in Kamakura. (Did you know that JR trains can be taken directly to Kamakura from Tsuchiura or Ushiku Stations during the summer?) These are nationally renowned Koke-dera (moss temples), but it is by no means necessary to leave our city to partake in the pleasures of moss viewing. As I mentioned above, the sacred grove of any shrine or the grounds of any temple will do, especially on rainy days.

Unfortunately, the same conditions which allow moss to thrive are favored by various types of mould and mildew, and foreigners who come to live in Japan are driven to despair by their relentless proliferation. Walls, books, photos, are all common victims. Once I discovered that a pair of white sneakers I wanted to wear had turned black with mould! I the same time I found that a formerly black pair of shoes had turned white!  This is  not just a nuisance-it is a health hazard as well.

Of course, this is a problem for the Japanese, too, but since their ancestors have had to deal with the problem for millennia, there are plenty of bits  of folk knowledge passed down from generation to generation which help  to cope.

I have also written about the many different words for rain in the Japanese language here: