FROG CHORUS Is Nature`s Richest Orchestral Show- Take Some Time To Give It a Serious Listen – REVISITED 19 May, 2010 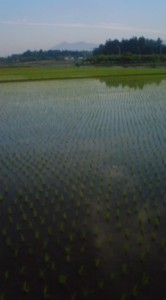 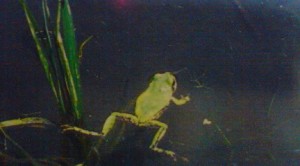 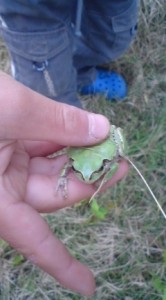 A tree frog ( AMAGAERU) in the hand in Saiki, Tsukuba

There are 43 species of frog in the Japanese Archipelago ( and about 4000 in the world), though in Tsukuba`s ponds and rice fields you will probably only encounter 6 or seven of these. By far the most predominant of our  local frog residents are the small, green (though they can change color to brown or even blue!) AMAGAERU (tree frogs), which overwhelmingly make up the main vocal body of Tsukuba`s frog chorus. For me, their call`s tone color resembles orchestral strings, with a cricket -like drone. 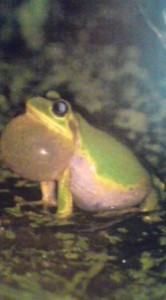 Most similar in size (3-4 cm ) and color to the amagearu are the SHLEGEL-GAERU (named after a German naturalist). The tone of their cry sounds to me more like a creaking, or the sound of rapid knocking on hollow wood. These frogs lay their eggs, which look like a light white foam, on bushes, trees, lawns, etc. The easiest way to distinguish the amagaeru from the shlegel, is that the former has a black line which runs horizontally from its eye. 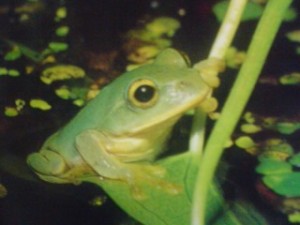 A Shuregeru ( schlegel) Gaeru- see, it has no black stripe

Both of these frogs produce their song by expanding a single pouch beneath their chin. 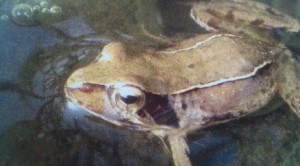 The AKAGAERU, which actually lays its eggs in the paddy fields, is larger than the amagaeru (4-6 cm), and is a deeper green with two spines (creases) down its back. Its call reminds me of the clucking of chickens, in short bursts. 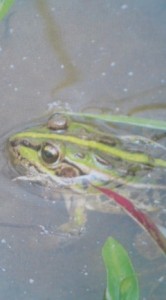 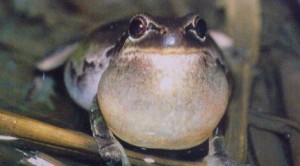