Wintery Weather Has Hanami Revelers All Bundled Up 9 April, 2010 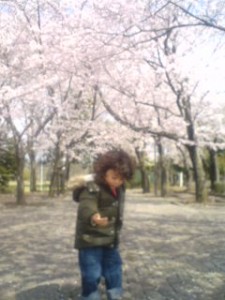 By Avi Landau
In Japan, Winter does not give up its term of dominance easily. It always seems to go out kicking and shouting.  Spring might show its long awaited self, emanating warmth, sweet fragrances and the chattering of birds, but alas, it CANNOT maintain a firm hold on things at first. Around the time of the vernal equinox in late March, the two seasons  battle each other for control, going at it like two wrestlers, with some times one, and then the other gaining the upper hand.
The Japanese have an expression ( which has come by way of Korea from China) which expresses the unstable meteoroligical state of affairs of early spring: SAN KAN SHI ON (三寒四温 ）, which literally means 3 cold ( days), and then 4 warm (days) , as KAN is the reading of the Chinese character which means cold, and ON the reading for that which means warm.
Usually by the time the cherry blossoms have started to bloom, winter has already lost its grip on Japan, making the HANAMI ( cherry blossom viewing) season a time of joyous new beginnings, as not only is the natural world of plants and animals rejuvinated by the warmth, but a new school and work year also begins amid the ubiquitous blossoms.
This year ( 2010), however, winter has proved remarkably indefatiguable, with frosty temperatures, clouds and rain nearly every day through today ( April ninth) with the cherry blossoms in full bloom. Recently, we have had only one springlike day, Tuesday, and few people were probably able to take advantage of it and have a good HANAMI PARTY ( eating and drinking under the cherry trees).
Thus, we could say that instead of SAN KAN SHI ON ( 3 cold and four warms days), this year we`ve had KAN KAN KAN KAN KAN ON KAN KAN KAN !
And though this being Japan everyone still having cherry blossoms on their mind despite the weather, most people DO seem to be a bit down.
It was odd to go to Ueno Park in Tokyo, the site of some of Japan`s most enthusiastic HANAMI PARTIES and see the revelers all bundled up as if they were on some Himalayan expedition!
The weather has been so cold, in fact, that there has already been severe agricultural damage. It appears that  in some parts of Japan,  the persimon trees, which flower in early spring, have been badly damaged by the cold. I have heard that this years crop might be 80 percent lower than last years.
Naturally other crops, and animals as well, have been affected by the cold.
Lets hope that this weekend provides some fine weather so that we can fully enjoy Japan`s most important RITE OF SPRING ( and so that the farmers have some good weather for getting cultivation underway).
Her is a list of good places to see cherry blossoms in Tsukuba:
http://blog.alientimes.org/2009/03/where-to-see-the-cherry-blossoms-in-tsukuba/
though there are plenty of good trees at just about every park, school, city office, etc.
These trees are almost exclusively SOMEI YOSHINO, a variety which was developed and widely planted only starting around the end of the Edo Period ( which was in 1868).
For some spectacular YAMAZAKURA ( 山桜), the trees which the Japanese people have traditionally cherished, head on up to Iwase, where you will find a wide variety of them.
Ive written about them here:
http://blog.alientimes.org/2009/04/the-connection-between-tsukubas-sakuragawa-river-and-sakura-cherry-trees-traced-to-its-source-the-actual-source-of-the-river-itself/ .
These bloom a little later than the SOMEI YOSHINO, so by the time they do the weather might have turned for the better.
An interesting difference between the trees in Japan`s parks and schools ( Somei Yoshino), and the wild cherries is that in the former the blossoms bloom before the leaves come out, while with the latter the leaves and blossoms come out together.
Remember, it is the wild type ( YAMA ZAKURA), that until modern times,  the Japanese imagined when they thought of SAKURA.
Postscript 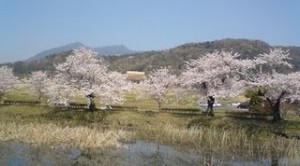 The weather did warm up in Tsukuba- just in time for the last day of full bloom! as I walked out of my house on Saturday it was as if after a week long fever I had awakened and found myself miraculously back to normal. As the sun warmed me I felt my loosen and my mind relax.

Taking advantage of such good fortune I did as much HANAMI as I could for one day, just all the other people who seemed to feel exactly as I did.
When the day was done, I had a good case of HANA TSUKARE ( 花疲れ), literally Cherry blossom fatigue, an expression which has actually bacome a haiku key-word ( KIGO). You can imagine the ladies of the old Heian Court ( in what is now Kyoto), who rarely left their quarters, getting all dressed up for a days outing to party all day uder the mountai cherry blossoms. They must have gotten tired out indeed!
On Sunday ( today), I strolled slowly along tsukuba`s main cycling and pedestrian path, which is lined on both sides with sakura. With each gust of wind there was a HANA FUBUKI ( cherry blossom blizzard), which sometimes got quite violent.
Naturally, everyone out there felt  regret at the beautiful blossoms falling away. But there is also a sense of continuity, with all the memories evoked of HANAMI past and dreams of those in the future.
As Basho wrote SAMAZAMA NO KOTO OMIDASU SAKURA KANA ( さまざまの事おもひだす桜かな), which I translate as:
CHERRY BLOSSOMS-So many memries come rushing back ! 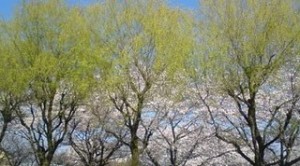