Look at the Etymology of the Word SAKURA For a Deeper Understanding of Japan’s UNIQUE Celebration of Cherry Blossoms: O-HANAMI (お花見)- Revisited 2 April, 2010 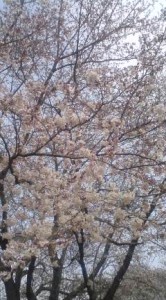 If you are in Japan during early April, you will certainly hear a lot about, and most probably even be invited to, HANAMI, which is usually translated  as CHERRY BLOSSOM VIEWING.  Unfortunately, this English description does absolutely no justice to the UNIQUE way in which the Japanese celebrate the full flowering of the sakura (cherry) trees. For while you might well have seen people enjoy the VIEWING of  flowers or blossoms in other countries, or even watched Japanese people admiring OTHER popular flowers in Japan itself, nothing will have prepared you for the crowds, solemnity, excitement, ribaldry, and the INTENSITY OF GAZE, that you will find at so-called cherry blossom viewing parties, especially at Japan’s famous HANAMI spots. 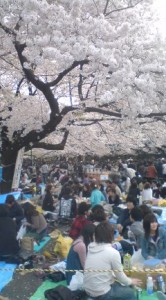 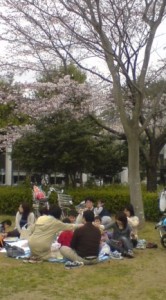 For the farmers, who believed that after the rice harvest in autumn the God Of the Rice Fields would retreat to the mountains only to return once again in spring, the blossoms of the cherry trees were a physical manifestation of the God. When full bloom was reached the farmers would entertain the God with feasting, singing, dancing, revelry, and drinking (even in contemporary Shinto, the Gods are often entertained by music and dances and offered food and drink. Lewd dancing is also an accepted way of enertaining the Gods, as the Sun Goddess herself, Amaterasu, was drawn out of hiding by such entertainment- see The Kojiki). Being that the blossoms were believed to be divine , the energies emitted by the blossoms at the full-bloom point were also considered to be an elixir. 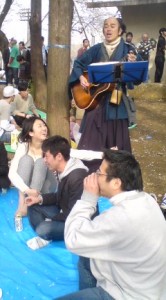 The farmers would also DIVINE (predict) the result of the next harvest by carefully and closely examining the sakura blossoms` petals. This is STILL done in some areas. When the blossoms had fallen completely it was a signal for the farmers that it was time to get to work.

In these ancient practices we can find all the components of contemporary HANAMI: the (sometimes raucous) partying under the blossoming trees, the careful examination of the blossoms, and the sense of reverence. We can now also understand why, in a culture which has been so strongly connected by the agricultural cycle, the SAKURA trees would have a special place among all other flowers and trees.

English language sources often suggest that because certain Japanese Emperors, especially the Emperor Saga, held elaborate and memorable HANAMI events that such a custom eventually became established among the people. Well, the Japanese folk certainly do have a tendency to try and emulate the culture of the aristocracy and the ruling class. However, this explanation fails to explain why the Emperors would have held these huge hanami gatherings. For me it seems natural me that the Emperors of Japan, who are also the HEAD PRIESTS OF THE NATION whose role it is to pray for abundant harvests, were merely doing what Japanese rice farmers had done since time immemorial- they entertained the god which was manifest in the cherry blossom. i think in the case of HANAMI it was the Emperors taking on the customs of the common folk.

Some foreign language sources also attribute Chinese origins to HANAMI.It is often explained how in the Nara Period, when Japan was indiscriminantly adapting any aspect of Chinese culture, the  Imperial Palace highlighted plum (ume) tree, the most prestigious blossoms of the Chinese Court. The oldest collection of Japanese poems (The Manyoshu), also had many more poems about plum blossoms than sakura. This was of course was due to Chinese influence. However, one point that is never mentioned in regard to this is that though the Chinese appreciate the beauty of nature, they never celebrated any of their favorite flowers the way the Japanese did the sakura. And though due to their prestige in China, plum blossoms were highly regarded as a ornament for the palace and a subject of poetry, they were never treated with the Hanami rituals.

These same sources explain how, later in the Heian Period, when the Japanese were more confident to assert their own roots, the sakura became the most respected tree at The Court because many cherry trees bloomed in the mountains around the new capital at Heian-Kyo (kyoto). I think that what really happened was, that for a period, when Chinese influence was at its strongest, in the Nara Period at the Heijo-kyo capital, the Japanese elite considered the sakura, which had always been and still was the tree closest to hearts of the people, was considered provincial and unsophisticated. Later, when the capital was moved and the Japanese began to gain more confidence in their own traditions, the sakura was returned to its place of prestige even at the Palace and in the poetry books.

I do not mean to assert here that The Japanese today are conscious of the spiritual roots of Hanami which I have descibed in this article. I do believe though, that all the ancient forms, and an unspecified sense of spiritual significance have been passed down through the centuries and live on today. 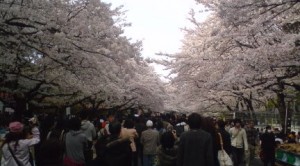 If you have a chance to do Hanami while you are in Japan- DO NOT HESITATE- it is a UNIQUE JAPANESE EXPERIENCE!

Take it all in!

For another article related to this season see-

and this article on the Sakura River`s connection to cherry trees: