Kanto Plain Is Transformed Into The Mongolian Steppes (again) For Festival 25 April, 2010 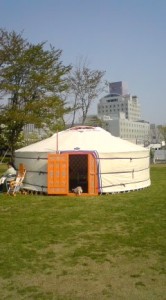 A Mongolian Ger set up in Tsukuba`s Central Park

Tsukuba is located on The Kanto Plain, the largest expanse of flat land in this mountainous country of Japan.Though at just 15,000 sq km (5,790 sq m ), it seems but a mere TUFT OF TURF when compared with the vastness of the Asian Steppes, what better place is there for Japan`s resident Mongolians to hold a festival celebrating their traditional culture. Sitting on the lawn of Tsukuba`s Central Park (Chuo Koen), this past Saturday or Sunday morning, with traditional tents (gers) being set up by costume clad Mongolians,the smell of barbeque and butter tea, and the sounds of the horse-headed-fiddle (morin huur) and throat singing (homi)blaring on the loudspeaker , one might have even imagined (with great stretch of the imagination) that they had been transported to the Mongolian grasslands, where people still live the nomadic life. 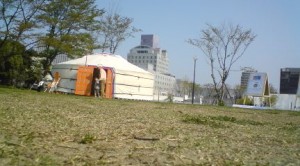 If you stayed for a while you could have also watched or even participated in the activities that the Mongols have traditionally liked best (and been VERY good at), namely- shooting arrows, wrestling and riding horses (these they were so good at that they they were able to conquer and control much of the area between Japan and Germany in the 13th century!). 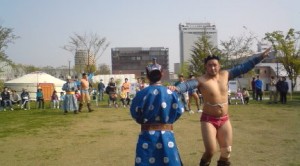 Besides enjoying the festivities, the glorious weather, and the company of old and fresh acquaintance, this event could not help but set one to thinking, not only about the history and culture of Mongolia, but also of the great impact that that country has had on East Asia and regions beyond.

First, there was the sound of the Mongolian language itself, which completely unlike the tonal Chinese, could be mistaken by an overhearer as being Korean or even Japanese. This is because the ancestors of todays Mongolians, carried the grammatical fundamentals of their language with them as they spread out far to the east and west on horseback, leaving their linguistic seeds wherever they went. In some places, especially across a horizontal axis which runs across northern Eurasia, these kernals have bloomed into modern languages including among others Finnish, Estonian, Hungarian , Turkish, Kazakh, Tatar, Uzbek, Uyger, Korean and Japanese. When the KIBA MONZOKU(tribe of horsemen), so often referred to in theories on the origins of the Japanese people arrived and settled in the Japanese archipelago, they brought with them these same seeds, which eventually overwhelmed all over languages spoken by the original inhabitants of these islands. Over the centuries this fundamental grammar took on some of the vocabulary of these other languages and was of course deeply impacted by Chinese and other factors. Still, the languages of today`s Japan and Mongolia, though now mutually incomprehensible, share common roots.

Because of completely different environments, and exposure to different influences, Mongolia and Japan have naturally developed completely different cultures(the most important being that Japanese culture had long been centered around rice production while in the inhospitable climes of the steppes there was veritably NO AGRICULTURE!) Still there are some shared characterics and cultural artifacts which can be seen TODAY attesting to these shared roots. Because discussing these in detail would result in a book- length work, here I will only mention one point specifically brought to mind by last weekend`s festival. 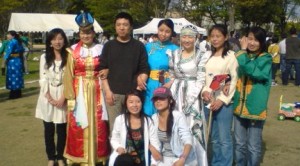 One could not help being struck by the uncanny similarity between the Mongol style of wrestling and Japanese sumo. Especially the way the men prepped themselves by slapping their legs and stomping the ground, and also by the way that their names were chanted out before the bouts began. It seemed clear to me that in ancient times this sport had been introduced to Japan by the ancestors of the Mongols or related tribesmen, the above mentioned KIBA MINZOKU (Tribe of Horsemen), who eventually dominated Japan while blending in at the same . It was rivetting for me to see how, this particular activity, wrestling, had survived all the changes over the centuries of Japanese cultural development. Thinking about this, it seemed only natural that todays greatest sumo champion, is also the worlds most famous Mongolian- Asashoryu. One outstanding point of difference (among many), between todays sumo and Mongolian wrestling is that in Mongolia, when about is finished, the loser bends over, and is given a slap on the butt ( a patsh in the tush, as we say in NY), by the winner!

And now for a few thoughts on how the Mongols have influenced the world that came to my head while at the festival. While observing the archery, I watched with interest how reverently each of the Mongolians would treat the bow and arrow( the ones used in Tsukuba were in fact mere toy versions of the traditional weapon), usually touching them to their forehead. It was with their skill with the bow and arrow,and the special ring-trigger they developed which let their arrows fly farther than any other armies, that along with their cavalry techniques made the Mongols invicible (if they had reached the Brittish Isles, though, they would have had to confront the English long-bows and who knows what would have happened).

The terror aroused by these fearsome and virtually unstoppable warriors left an imprint which can still be seen today in many forms. The most impressive of these of course is The Great Wall of China, the worlds greatest construction project ever, which was undertaken in order to (unsuccessfully) keep the ancestors of the present Mongolians out of China. Whenever you go to a convenience store in Japan, you will be confronted with another expression of the ancient fear of the Mongols passed down through the generations- the NIKU-MAN, or steam bun. These were developed by the Chinese as a symbolic way of eating or insulting their enemy- as these buns have the same shape as the Mongolian tents, the ger (pao in Chinese, the same word they use for the buns), much in the same way that for the Europeans the croissant symbolized the Turkish flag, which when eaten would be an insult to that feared foe (also liguistically related to the Mongols, and actually driven out of their ancient homeland and onto the road of European conquest by the Mongols)- The Turks.

As I mentioned earlier, at its zenith, the Mongol armies extended from Korea to Poland. I have always felt that the countries at the edges of this devastated territory, the two countries who for decades fearfully awaited the next dreaded attack, Germany looking to the east, and Japan looking to the continent in the west, had been traumatized by this experience, and developed SPECIAL xenophobic attitudes, which were expressed most dramatically in the mid-20th century, especially in regard to the countries out of which centuries ago they expected a Mongol attack to come from.

Germany had been spared because of the death of Ogedei ( Genghis Khans son), and the sudden (and for the Western Europeans puzzling) retreat of the Mongol armies. The Japanese, however, were actually attacked twice (in 1274 and 1281), and were only able to fight off the invading armies with the help of typhoons, which came to be known as the KAMIKAZE, the DIVINE WIND, which was after that, considered to be the protector of they felt to be a unique nation (unique in that they were not devasted by the Mongols ,as the Koreans and Chinese, before their defeats and occupation, greatly respected by the Japanese elite, had been).

Another important point for Japan is that as China was under attack, some of the great continental minds and talents were lucky enough to make their escape to Japan where they could contribute greatly to the development of Japanese culture (after they were Japanized, of course). Enough of these musings ! Thanks to all the warm hearted and friendly people who produced the festival- it was lots of fun, and very STIMULATING! Next time you munch into a NIKU-MAN, remember what you are symbollically doing! 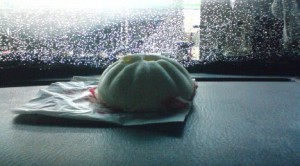 Niku-Man ( steamed buns) a common snack in Japan derive their shape from the Mongolian Ger!

This is a reprint of my report on the festival last year. The same event was held in Tsukuba`s Central Park today

(terracotta figurine) excavated at an archaeological site in Tsukuba which gave me some more thought on the Japan-Mongolia connection. I will post them some time this week! 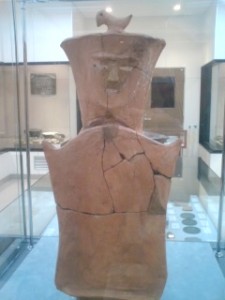 This Terra-cota Figurine ( haniwa) unearthed in Tsukuba with what appears to be a hawk on its head, reminded me of one of the more famous Hawk-headed marauding horsemen from the Central Asia- Attila The Hun 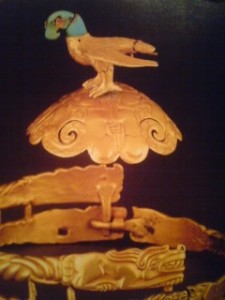 A gold crown topped with a hawk. Part of the Mongolian Teasures exihition recently held in Japan. Just another something, with its similarity to the haniwa shown above, which suggests to me a connection between Mongolia and ancient Japan.