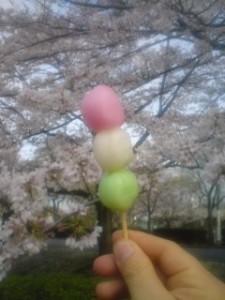 Thoughout the month of March, as Japan`s mass media reports the daily progress of the CHERRY BLOSSOM FRONT across the Japanese Archipelago, those of us living in the Kanto Area ( around Tokyo) anticipate  our local sakura trees bursting into bloom (sometime in April) by enjoying SAKURA MOCHI during tea breaks, at work or at home. These are sweets which consist of smooth, pink colored patties (made of wheat flour)which are gently folded around a dab of sweet bean paste ( anko). Importantly,  a young cherry tree LEAF which has been lightly salted, is then wrapped around this ( the leaves have been picked during the previous year, of course).

The fragrance of the cherry leaf is absorbed by the soft dough, giving this confection a distinctive taste and aroma ( and the leaf is eaten as well!). This particular confection first became popular in Edo ( now Tokyo), and the shop which first sold them ( Yamamoto-Ya), is still selling them to this day. ( Ive written more about this here: http://blog.alientimes.org/2008/04/to-eat-the-leaf-or-not-to-eat-the-leaf-that-is-the-question/ )

I was surprised a few years ago, when a friend, born and raised in the Kansai Area ( around Kyoto and Osaka), and who had just come to live in Tsukuba ( in Kanto), had NEVER SEEN such a sakura mochi before. The fact is that in Osaka, what they call sakura mochi is ALSO a sweet  wrapped in a cherry leaf.  Theirs, however, is round, and made with sticky rice which has not been pounded smooth, so that each grain is clearly visible. These are called DOMYO- JI outside of Kansai ( and they are available at some shops in Tsukuba). 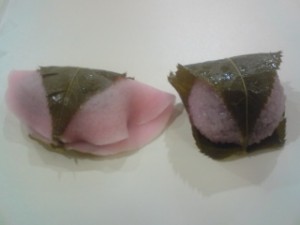 Still more surprising was to find out that many WAGASHI-YA ( traditional Japanese sweet shops) stop selling  sakura mochi with the onset of April, when the sakura trees actually start blooming around here, 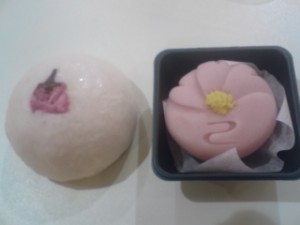 The reason for this is that the most traditional sweet taken to cherry blossom parties has long been HANAMI-DANGO. Sticky and chewy little balls ( four or five of them) skewered on a stick.

Generally speaking, dango are made out of pounded grain, boiled or roasted. There are many types of these dumplings, depending on the time of year and the region, and they are available throughout Japan all year round.

Dango are the simplest and most rustic ( you could say primitive) of all Japanese sweets, making them perfectly suitable for Japan`s most ancient customs- cherry blossom parties and moon-viewing ( for which Tsukimi Dango are offered to the moon).

It is popular. however, in the cherry blossom season, to find three-colored HANAMI-DANGO at convenience stores and supermarkets. The  colors represent the blossoms- pink, the fresh foliage of spring- green, and most importantly, SAKE- white! 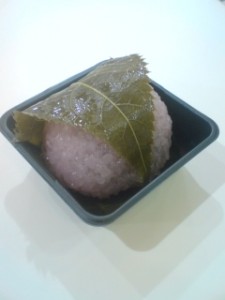 If you  visit a wagashi shop ( or the hanami sweets display at your local supermarket, you will find a wide variety of cherry motifed goodies. Some are extremely beautiful. The confectioners have surely been inspired by the poets of old who wrote:

MITE NO MIYA HITO NI KATARAMU SAKURA HANA TE GOTO NI ORITE IE TSUTO NI SEMU ( 見てのみや人にかたらむさくら花手ごとに折りて家つとにせむ）- which means- the blossoms are so beautiful that I`d like to break of a branch and take then home with me.

As actually doing this would be very bad form indeed- almost sacreligious, what better surrogate for the blossoms than taking home the beautiful cherry shaped and motifed wonders created by Japans imaginative confectioners. They taste good too. But dont forget that these sweets are made to go with green tea and not coffee, so make sure you have some when you get ready to eat them.

Enjoy your hanami! And if you have no time here in Kanto, remember that the CHERRY BLOSSOM FRONT will continue its progress northward. You still have some time to catch the blossoms at some of Japan`s most famous cherry spots, including Kakunodate in Akita and Hirosaki in Aomori. 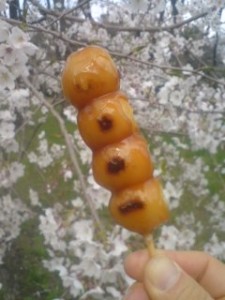 Skewered Dango in a sweet paste

One more thing about the dango skewered on a stick that I cant resist pointing out. Though during the cherry blossom season there are the colored HANAMI DANGO with three dumplings on a stick, in Tokyo, for most of the year, there are FOUR on a stick, and in Kyoto FIVE !

Here is an example of a BENTO ( lunch box) especially prepared for a cherry blossom excursion. Note the cherry flavored rice: 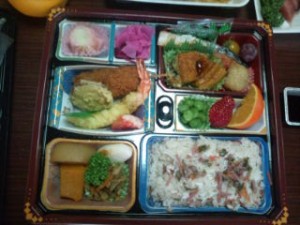