Zakumata, Y-shaped sticks placed at cross-roads are a unique way of praying for EASY DELIVERY! 9 March, 2010

FOR A WOMAN`S HOUR OF GREATEST NEED, A CALL TO MAN`S  BEST FRIEND 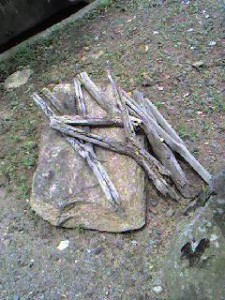 Sticks and stones standing at the fork in the road. Many pass by them every day. Most do not notice. I have spoken to very few who do. For me, however, the large, roughly-hewn Y-shaped sticks, leaning up against the gray, grainy, gravestone-like sacred slabs, never fail to grab my attention.

It’s as if they shout to me from a distant, pre-Yamato past, crying out from among the aluminum and asphalt, convenience store ridden jungle of a new world which has sprung up so rudely around them. 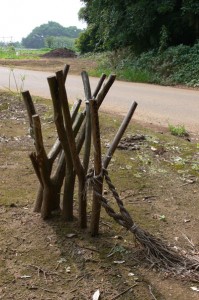 When long ago (much longer than I like to admit), I first began to wander the backroads of Tsukuba and had just begun to take up the study of the Japanese Language in earnest, it was coming across these rustically whittled sticks, which upon closer inspection revealed mysterious inscriptions, that drew me to the world of local MINKAN SHINKO (民間信仰), or folk beliefs. Even at that time, I could discern that not all the writing on the sticks was in Japanese characters. One prong was usually inscribed in Sanskrit. And though my Japanese skills were still in their embryonic stage, there was one character familiar to me, which appeared on each stick — 犬, or DOG! How absolutely bizarre this seemed to me! My curiosity was aroused further when all of my Japanese new-resident, researcher or salary-men friends were as puzzled as I was when I asked them for an explanation.

Many years have passed and I have come a long way in gaining an understanding of this ancient and VERY localized custom. There is at present no information available in English (I believe this will be the first description of this custom in the language of Shakespeare and Joyce) and very little is available in Japanese. All the knowledge I have acquired has come from the mouths of locals, mostly farmers, and usually senior citizens. It is from them that I learned that these slingshot-like sticks are called ZAKUMATA or ZAKOMATA and that the custom of setting them at a fork in the road is called INUKUYO (犬供養）or Offerings to Dogs. Most surprising, was finding out that this custom was related to pregnancy and childbirth, probably THE most awe-inspiring and (because of the perils involved) prayer-inducing event in the human life cycle.

Trying to understand how dogs, forked-sticks and crossroads related to reproduction has given me deeper insights into traditional ways of reasoning in which  seemingly incongruous objects can be connected through similarity of shape or sound.

Well, enough of this wordy introduction. Let’s get to the crux of the (zaku)MATA!

In Japanese culture, dogs are a symbol of  safe childbirth because it is thought that dogs themselves deliver their puppies easily. To this day, many women go to a temple on the first Dog Day of the year (every day on the  traditional calendar is designated with a different animal of the oriental zodiac in cycles of 12) to receive a specially blessed sash called a dog-obi ( INU-OBI). This is worn throughout the pregnancy to protect the unborn child and ensure easy delivery. In this area (Tsukuba), most women go to the Amabiki Kannon Temple in Makabe to receive their sashes and blessings. Additionally, each village or hamlet (mura) holds regular prayer sessions for fertility, safe pregnancy and easy delivery. Specific customs vary from community to community.

There is a special twist, however, to these rites, as they are held in Ibaraki Prefecture and its fringes in Chiba and Tochigi. This involves the cutting of a forked branch from a tree, taking it to a temple to be inscribed, then holding a ceremony to set it at a traditionally designated fork in the road ( or other palce) at which there is a sekibutsu (sacred stone). This ceremony is called Inukuyo ( 犬供養), because these offerings are made to the spirits of deceased dogs, hoping that they will intercede favorably on behalf of the pregnant women and help ensure a safe delivery. 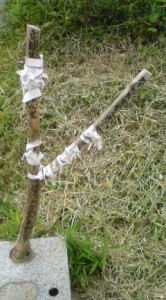 A Y-shaped branch is placed at the Y in the road because the shape is reflective of the spread legs of a woman in labor.  The Y shape and dogs are connected in that they both have a symbolic connection to childbirth. Because of this, when an old female dog who was kept by local farmers dies,it might still be buried at the fork in the road under the zakumata.

Specifics regarding inukuyo vary greatly within Ibaraki and even within Tsukuba. Each hamlet has different customs regarding the dates and frequency of the Dog Offering Ceremony, the kind of wood used to make the zakumata, and the type (sect) of temple at which the zakumata is inscribed.

Given the limited space I plan to use for this article , I will list the specifics of the custom as practiced in Tsukuba`s Kukizaki neighborhood as explained to me by Mrs Yoko Noguchi.

In Noguchi-san’s neighborhood the ceremony is carried out twice a year, on the third Sundays of March and October. They use the wood of the chestnut tree, because chestnuts come off the tree easily, with a mere touch, and the sound of its coming off –PORO-TO (in Japanese onomatopoeia) — suggests easy delivery. The zakumata are taken to a temple of the Shingon sect to be inscribed and blessed.

Noguchi-San said that her neighbors bury their dogs and cats, especially if they are very old, under the zakumata.

In some towns in Ibaraki, offerings are made not to dogs but to cats. This is because it is believed that cats have difficulty in delivering and would want to help us avoid the suffering that they go through! The town nearest Tsukuba in which you can commonly see nekokuyo written on zakumata is Makabe.

Even with the astonishing developments in obstetrics and the great reduction in recent years in complications and death related to childbirth, you still might want a little extra spiritual support to quell your anxieties over an upcoming birth. If that is the case, you can cut yourself a zakumata and head for the crossroad. Remember Y marks the spot!