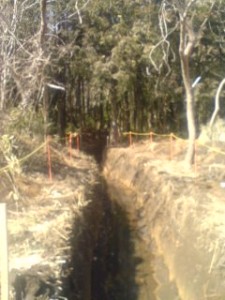 A trench which now runs through the Konda Woods

Though the air is still brisk , it is filled with the fragrance of spring. Especially the sweet perfume of the numerous plum trees which are now bursting into bloom throughout Tsukuba ( and the rest of the Kanto Area). The UGUISU ( bush warblers), those little, hard to spot birds whose call has long been the traditional symbol of spring in Japan, have also returned, and I can hear them ( though I`ve not yet actually seen one), in the early mornings,  flitting about in my garden in Tsukuba`s Konda neighborhood.

( read more of what Ive written about UGUISU here:

In past years,one of  the great pleasures of spring for me, has been to walk through the woods behind my house , to an open meadow, where I  sit  down and listen. The chatter of birds is astounding. An almost continuous call and response going on between the uguisu, punctuated by the frequent squawking of pheasant ( kiji), and the shrill cries of various birds of prey.

This week, however, when I set out to my favorite spot, armed with binoculars,camera and eager ears, I found my path blocked by a deep trench, which I discovered ran for more than a kilometer through the woods.  WHAT IS GOING ON ? – I thought? Not  only was this an obstacle impeding the free passage of the areas numerous small mammals (and other creatures), but it also ran right through the nesting area of our local ( and very nervous) goshawk!

Walking along this trench towards the road, I finally reached the construction crew which was in the process of further extending it. They were under the employ of  UR 都市再生機構 (UR Toshi Saisei Kiko), the company which has bought up much of the land around here with the aim of developing it, despite the fact that it is rife with archaeological sites and is the last surviving major lowland wood forest ecosystem in Tsukuba.

When I asked about what they were doing, they explained that because so many trees in the area had been cut down ( by THEM!), there was a danger of flooding ( as the trees which were cut down used to absorb excess rain water) and that they had to dig these trenches for drainage. 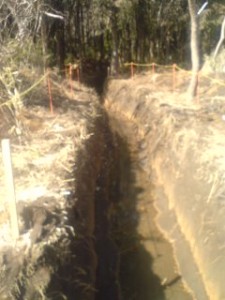 Surely, the deforestation recently carried out by UR in the Nakane Kondadai woods has made it necessary to install some form of drainage system. However, why did they have to run these trenches through the woods that local residences thought they had PROTECTED AND SAVED. No, the company did not actually CUT DOWN the trees, but these trenches, not only FRAGMENT this important ecosystem by dividing up and impeding the free movement of wildlife, but these canals, when filled with water, might damage/ kill the surrounding trees. Most importantly, this noisy construction project will probably keep our local goshawk from nesting in the area ( the nesting season is NOW). The birds presence has long been a problem for the construction company and they will be very happy if it takes up residence elsewhere. With this trench project it probably will!

I guess it will not be so easy ( or pleasant) to take my usual walk sin the woods this spring. And though it seems that there is nothing we can do to stop the construction ( as it is already underway) I think it would be appropriate, that when the company finishes digging these trenches that they COVERthem in a way that will permit the areas small animals to cross over  without getting  trapped.