The Tiger in Japanese History and Culture ( a brief look) 16 February, 2010 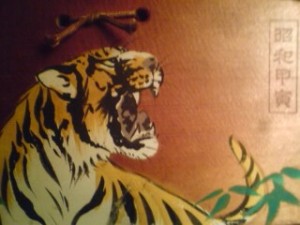 An Ema votive tablet with tiger ( from my collection)

On the evening of  Saturday February the 13th 2010, just after the sun went down, you might very well have heard the sound of fireworks or fire-crackers. I did. Walking out in the fields of rural Ibaraki Prefecture with my dog and a steady snow fall,  muted explosions coming from far off in the distance and seemingly every direction  broke the solemn hush. What the ……? Then I remembered- The Chinese New Year!

The Chinese residents of Tsukuba  and the surrounding area ( and anywhere in the world that Chinese people might be living) were ushering in the new year-  The Year of the Tiger, in the traditional way, according to the lunar calendar.

Until 1872,when they switched over to the Western calendar, the Japanese also celebrated New Year`s on the same day as the Chinese, which usually falls somewhere in late January or early February on the Gregorian Calendar. And, like the Chinese still do, they would greet the New Year at sun down instead of midnight as they do now.

I have been surprised to find that many Japanese are NOT conscious of the Chinese roots of their most important festival- O Shogatsu ( New Year`s), because despite the superficial changes of time and date, the way the Japanese celebrate the New Year is still strikingly similar to how it is celebrated by the Chinese- returning to ones hometown, praying to ones ancestors, abstaining from cooking and cleaning, inviting good luck into the home with auspicious symbols,visiting a temple, etc.

Another key Chinese element which has remained an essential part of the  Japanese New Year celebration , calendar, and culture in general, is the Chinese zodiac, which consists of twelve animals- The mouse, cow, tiger, rabbit, dragon, snake, horse, sheep, monkey, rooster, dog and pig ( in that order). Before 1872, the Japanese used these twelve signs  not only to represent a cycle of 12 years, but also the months, days and hours ( in fact the Japanese words for am and pm-  午前( gozen) and午後 (gogo) literally mean before and after the Hour of the Horse, respectively). Many  calendars still provide day to day zodiac related information, and there are still quite a few living traditions in Japan which are based on this day to day zodiac system.

The Japanese DID make one small change in the zodiac that they adopted. Instead of the Pig, they substituted the Wild Boar. This is not strange, however, since the domestic pig was not very familiar to the Japanese while the wild boar was common throughout its main islands and respected for its courage and strength.

What IS interesting, however, is that the Japanese did not substitute any other animal for the tiger,  which lived  in the wilds of  Korea and China, but was never present in Japan!

( Well, I guess you could say that there were never any dragons either!)

This being the Year of the Tiger, I`d like to talk a little about this majestic cat`s  place in Japanese culture and history. 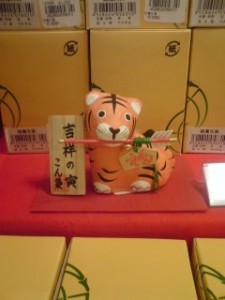 The Tiger in Japan

Though they have never lived in the wild anywhere within the Japanese archipelago, the Japanese have long known about the  tiger, so highly esteemed, and feared, on the continent , from pictures, stories AND skins, which were brought over by emissaries, monks, traders and soldiers.

The Japanese word for tiger, tora, is believed to be of southern Chinese origin, deriving from the word taira.

The first appearance of the tiger in ( extant) Japanese texts is in the Nihon Shoki ( 720, the second oldest Japanese text after the Kojiki). There, we can find the account of  Kashiwade no Omihasui, who in the 6th year of the reign of the Emperor Kinmei ( 欽明天皇)-545 AD, was sent to the Kingdom of Paekche ( Kudara in Japanese), on the Korean Peninsula, as an ambassador. According to the story, Kashiwade took his wife and child with him. When they arrived on the shores of the peninsula, the sun had set, and in the darkness the child disappeared,  grabbed by a tiger. The Japanese ambassador pursued the animal, and eventually slew it with his sword. He later brought the skin back with him to Japan.

The tiger also appears  in the earliest collection of Japanese poems- the Manyoshu ( 8th Century), where one poet refers to the tiger as The Korean God called the Tiger  ( 韓国の虎という神). This reflects the feeling of respect, fear, and AWE towards tiger, which was carried over to Japan from the continent.

The tiger as something to be feared ( even though there were none in Japan) is a feature of many old Japanese stories for children. One, still commonly told today, introduced the phrase- FURUYA NO MORU WA  TORA O-KAMI YORI MO OSOROSHII ( 古屋の漏るは虎狼よりも恐ろしい)- which means A leaky roof is more terrible than tigers or wolves, and shows that tigers were a standard for scariness !

The first recorded instance of a live, captive tiger being brought to Japan was in the year 840 AD, during the reign of The Emperor Uta ( 宇多天皇). This unfortunate animal was painted by the artist Kose no Kaneoka.

It was during this time ( the Heian Period 794-1185), that tiger bone medicine, specially imported from China, helped cure the Emperor during an epidemic. This occurence is still commemorated each November  in Osaka during the Shinno Festival, at which  papier-mache tigers are given out for free in the hope that they will keep disease away. Unfortunately,this belief ( also imported from China) in the medicinal properties of various parts of the tiger`s body, still exists in some quarters, keeping alive the trade in this now HIGHLY ENDANGERED SPECIES

During Japan`s Period of Civil Wars ( Mid 15th to early 17th Century), there are records of an abundance of tiger skins having been imported from Ming China.

When Japanese armies under the command of Toyotomi Hideyoshi invaded the Korean Peninsula ( 1592-94), besides all the atrocities committed against the local populations and properties,  plenty of leisure time and energy were spent on catching and killing tigers.

In fact, Hideyoshi brought a live tiger back to Japan to exhibit to the Emperor in Kyoto and various generals.

According to the extant text Shinchomonshu- this tiger was kept in captivity and in Osaka Castle and fed live dogs. Watching the tiger killing the dogs must have provided much amusement for Hideyoshi`s men, but the tiger neede lots of dogs and these were procured form villagers by local headmen. The book recounts the story of how finally, one dog  battled the tiger to the death ( both died ). Investigating the incident Hideyoshi found that the particular headman who provided this dog had done so against it masters wishes. Hideyoshi believed that it was the great resentment of the dogs owner, channeled into the dog itself, which gave the pooch the strength to defeat the tiger. Subsequently the dogs former master was compensated while the unscrupulous headman was severely punished.

(This story about a tiger at Osaka Castle and the festival celebrating the tiger medicine in Osaka`s old pharmaceutical district  are probably two of the reasons why Osaka`s baseball team is called The Tigers!)

During the Edo Period ( 1600-1868) stuffed and mounted tigers were commonly exhibited.but while the general public became more and more aware of the tigers physical appearance, they lost the sense of awe and fear which had so long been associated with the animal. For the citizens of Edo the tiger was just something that looked COOL. It did continue to be a symbol of bravery and dignity and pictures or figures of tigers were believed to invite good fortune.

Because the tiger was thought to be especially protective of its young, these lucky tiger goods were used to pray for the health and safety of ones children. For the same reason, the expression TORA NO KO (a tiger cub) came to be used to refer to any highly prized possession.

It was also said that the tiger  runs 1000 RI ( about 4,000 km), and then comes back. That is why he tiger became an important lucky charm for soldiers going off to war. You might also remeber that the signal for GO AHEAD before the attack on Pearl Harbour in December 1941 was TORA,TORA,TORA ( tiger,tiger,tiger) which expresses a special desire to return home safely from the mission.

Tigers are also thought to be effective in keeping away evil and bad energies. At the Kurama Temple in Kyoto, intead of the usual guardian lions, there are guardian tigers!

Leaving some living space for tigers

With rampant habitat destruction and poaching to meet the needs of those ( kooks) who believe its bones or penis have medicinal powers, in REAL LIFE, the tiger is teetering on the brink of extinction in the wild. It would be a shame and a sin against humanity to let this beautiful and majestic creature- the king of the 100 beasts ( hyaku ju- no oh, 百獣の王),  completely lose the wilds over which it has so long RULED .

Check out these web-sites if you are interested in helping protect the tiger.

Remebember- this is their year. But lets show are concern for them for years to come. They need some serious help if we are to still have tigers in the wild the next time The Year of the Tiger comes rolling around.