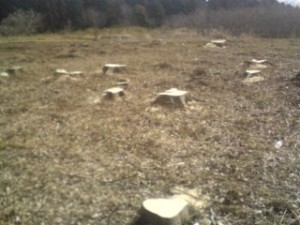 For most of January 2010, local residents who have long loved the Nakane Kondadai Woods in Tsukuba City had to turn away their eyes, cover up their ears, and most importantly- HARDEN THEIR HEARTS, as each day, from very early in the morning till dusk, the rumble of heavy machinery, the roar of  chain-saws, and the brutal sound of snapping tree trunks, announced that the work crews had finally come and the disaster we had been trying to avert- the loss of a precious natural area- had finally begun to unfold. Besides leaving town,  the only way to emotionally shield oneself from the what was going on was to TUNE OUT.  Night-time gave no solace, as local dogs barked incessantly into the wee hours,  excited by all the small mammals, now homeless, who were  frantically scouring the neighborhood, seeking somewhere to set up new lairs, burrows and dens. 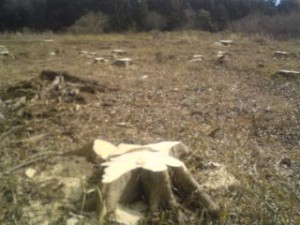 When the month was over and the dust finally cleared, the damage had to be assessed. When I finally built up the strength to actually have a look at the affected areas, places where I had often hiked and enjoyed the wildlife, I felt myself go numb all over, not only from the frosty winds which whipped my face, but from the desolate, ravaged, scenery, and the feeling that our efforts to stop an old and now pointless constructon project had not been completely successful.

Still we thought that the cutting was over. The company which is most deeply involved in the project and which is responsible for most of the dirty work , UR 都市再生機構 (UR Toshi Saisei Kiko), had distributed a map indicating the areas which would be cut. The work had been completed.

It was shocking then, to find that after the the major deforestion work had ended, another area, not indicated as having been under the axe on UR`s map, was reduced to stubble.

Checking the land registry we found that this plot was owned by UR itself. In fact, we have found that over the years, this company has bought up large portions of the Nakane Kondadai area, including land on which documented and mapped historical ruins lay. Maybe it is because they are a company with government affilliations ( run by former bureaucrats) that they were asked to push through  development on lan on which which no private company could have gotten the go ahead.

Just why this additional bit of woods outside the designated cutting area has been destroyed, I have yet to find out. Maybe the company was concerned that local activists would have tried to save it. and that would not make them very happy since their raison-d`etre seems to be- cut down Japan`s trees, and spread the concrete.