On a frosty morning  in late January, we came out of the woods and were passing through a meadow in Tsukuba`s Konda Neighborhood. We were on the way back from watching a crew of workers with heavy machinery clear the trees from around a local pond. My hands and ears were numb with cold and my heart numbed by what we had been watching.

Bushwhacking through a veritable jungle of reeds which had all turned the color of straw for winter, we approached a small thicket. Suddenly I heard an excited cry – So-bai !

I looked to my left and there they were-wild plum ( ume ,梅) blossoms blooming unusually early in the year.

The word so-bai, made up of the Kanji Characters- SO 早meaning early, and BAI 梅 meaning plum, is used to express these blossoms which bloom in winter before most of the other UME, which we expect to see in March.

I have often written of how the plum blossom has been considered  auspicious by the Chinese and the Japanese ( because it is resistant to cold and blossoms early in the year) and of how plum blossoms were also an important symbol for O-Shogatsu ( New Years).

This might seem odd to many, because now, the most famous places for viewing plum blossoms ( for example, the Kairaku-En Garden in Mito, Ibaraki Prefecture) are in bloom in March, the month with which the Ume is now most closely associated with. 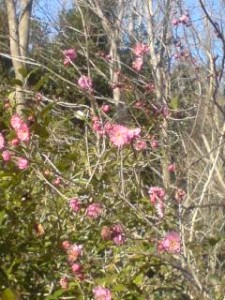 Depending on the region and weather conditions, however, there are plum trees which bloom in February and even January, as evidenced by the tree we found in Tsukuba.

Given the fact that the Japanese used to celebrate New Year`s usually somtime in February ( as the Chinese still do), according to the old calendar, it is only natural that these blossoms became associated with the new year and RENEWAL in general.

The So-bai certainly helped to lift my spirits. Cold and heavy hearted, plodding through the dead reeds, they helped ressure me that the meadow would, in the not too distant future, burst forth in color.

That is if the bulldozers dont get to it first.

and a comparison with Sakura ( cherry blossoms): 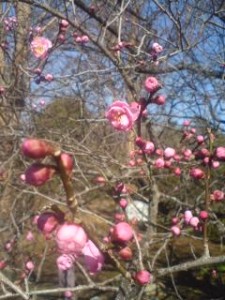