Destruction of Woods in Tsukuba`s Nakane Konda-dai ( 中根金田台の自然破壊が始まりました) Is Now Underway. Its NOT a pretty picture. 23 January, 2010 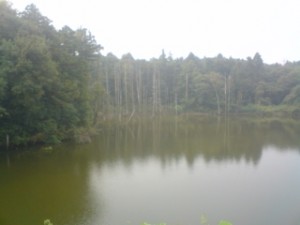 It is something I have long dreaded. The day that the men and the big machines would come and take away the forest which I have cherished ( and writtten about so often in these blog pages) over the years- the last extensive wild lowland tract in Tsukuba.

Getting up, each morning I anxiously have a look out my window, and sigh in relief when I find the unsual scene- a forest canopy which seems to extend all the way to Mt Tsukuba-still intact.

During the day, I frequently go back to the window to check for cranes or bulldozers. And though they didnt come, I knew that one day they would. When they finally did, I didnt SEE them coming. 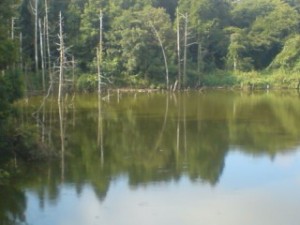 Deep forest behind the pond

I HEARD them. It was a deep and ominous rumbling, somewhere far in the distance, accented occassionally by the long drawn out sound of cracking wood. My blood froze and heart went numb. 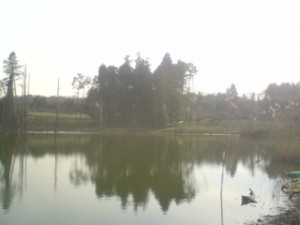 I knew it would be a painful thing for me to see, but I had to find out  exactly what was happening. I got on my bike and set out in the direction of the noise. I rode  for a while down a road flanked by undisturbed woods and meadows on both sides. Reaching an intersection and turning the corner, I approached the pond across from the Concert Hall Pachinko Parlor ( in Tsukuba`s Kamisakai). It was there that I came upon a nightmarish landscape- the deep woods behind the pond, were in the process of being torn away by a construction ( or should I say DESTRUCTION) crew.
I asked the workers how wide of an area they would be clearing. They said it would be about four hectares, for the time being.
The land will be used to build suburban style American housing ( with big front lawns), as part of what is being promoted as a GREEN COMMUNITY. The developer assert that the trees which will be planted in the gardens of these homes will create a new forest-in thirty years!
Now some of you who read this might think that Im getting a little too emotional about the loss of a few hectares of wood.  The fact is though, that once most of the area on which the Tsukuba Science city was built, consisted of forest and marshland. Most of the woods have by now been cut down and the marshes dried ( though if youlook at a map of  the city you can see a chain of parks with ponds, a remnant of the old marshes, running straight down the middle).Many of the small mammals and birds who fled from the surrounding areaa were able to find refuge in the Konda Woods, which has not been developed because of the presence of extensive archeological remains.
Im not suggesting that there should be no development. I do say, however, that there are LIMITS, and that we should leave a bit of of space for Japan`s other LONG-TIME residents- the animals and plants. 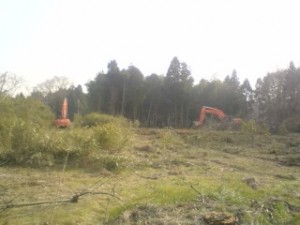 This just the beginning- but we can still stop the destruction

Local residents as well as like-minded citizens from around Japan ( and the world) have expressed  their concern for what is going on in Nakane Kondadai. And the efforts of these good people will probably end up saving a good portion of the woods.

Still it is sad to see the fringes of these wilds already falling to the ax.

It is also ironic to begin the year, 2010, the official International Year of Biodiverstiy by destroying such a precious habitat.

For more on this topic see: