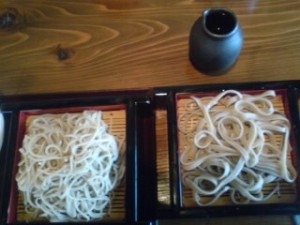 Soba noodles ( regular on the left, and Ju-wari 100% buckwheat on the right)

After sunset on December 31st, families all across Japan will be sitting down to eat buckwheat noodles, which for the occassion are called TOSHIKOSHI SOBA ( literally,  passing-from-one-year-to-the-next-soba).

Third, in the Edo Period Japanese goldsmiths used buckwheat dough-balls to gather up gold dust from the floor or table ( which was then separated in water). Buckwheat therefore became a symbol for attracting gold ( wealth).

We can thus see that it is NOT only because they are convenient and delicious that eating  soba on New Years Eve has become such a popular tradition!

( also remember that buckwheat noodles are presented to neighbors when moving into a new neighborhood. One reason for this is that SOBA, also means NEXT TO. Another is the fact that the noodles are long and slim, a way of saying, we are now close but lets not be THAT close.)