Daikon Radish Hung Out To Dry Mark The Beginning of the TAKUAN Making Process 10 December, 2009 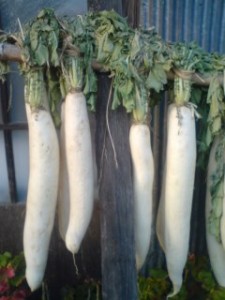 Though it was still only mid-afternoon, the sun was already starting to set behind the mountains of central Ibaraki, and the perfectly clear winter skies ( so typical of that season, in Japan), started to pinken near the horizon.

Walking along a country road, hoping to slowly savor the further deepening and spreading of  color, I suddenly came upon a typical ( but still always surprising for me)  scene of the Japanese countryside in winter- large, daikon radishes, hung out in the sun to dry.

And though the  radishes that I had just come across were still firm, fat and juicy looking ( they had obviously not been out their very long), their WHITENESS, which should have been dazzling after the washing they had gotten before hanging, was now gently reflecting the  hues of the sunset ( a scene which the photos I took with my cell phone camera DO NOT do justice to). 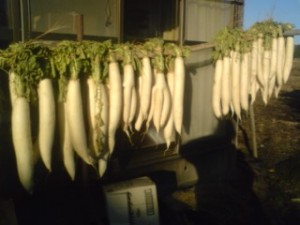 Japanese farmers hang radishes in the sun in early winter as the first step in the process of making the very commonly eaten pickle called a  TAKUAN ( which was named after the man who is said to have invented it- the Buddhist monk, artist, poet swordsman and tea ceremony practicioner- TAKUAN-SOHO, 1573-1645) 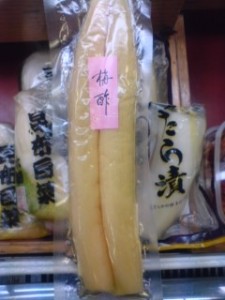 A packet of takuan (on top)

Though in recent years, practically odorless, STORE BOUGHT types of TAKUAN, which in supermarkets look like golden-yellow eels tightly airpacked into see-through plastic packages, have started to appear more and more frequently on tables ( and in lunch boxes) throughout Japan, in Tsukuba, and the rest of Ibaraki there are still plenty of families that continue to make them at home. These HOME-MADE TAKUAN vary in taste ( along with the recipe) from family to family and are often very strong smelling ( one of my neighbors presents me annually with a fresh batch of takuan which even wrapped tightly into TWO plastic bags SMELLS SO STRONGLY that I usually leave them OUTSIDE my door ( still, they are DELICIOUS !).

The home-made takuan are also much more appealing to me because they dont have all the CHEMICALS in them that the store bought ones do! 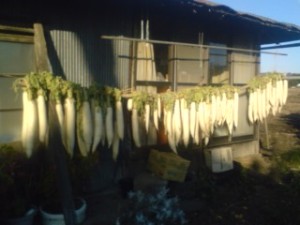 The radishes are usually left hanging for 8-10 days. Its interesting to observe them day by day, starting out all white, juicy and plump, slowly yellowing, wrinklng and the bending into  soft, yellowish, boomerangs.

These dried out radishes are them laid in a special barrel to be soaked and fermented in salt and NUKA ( rice bran, which is removed from the rice grains during polishing). Depending on the family recipe, the farmers might use sugar, citron, kelp, persimon skins etc., as ingredients. Up in Hitachi Omiya, in central Ibaraki, the farmers throw some NAILS into the mixture as well. They say the iron gives their takuan a distinctive flavor!

When the barrel is full, the lid is put on and something heavy ( often stones) are placed on top to press down on the mixture.

In about 40 days the TAKUAN will be ready. 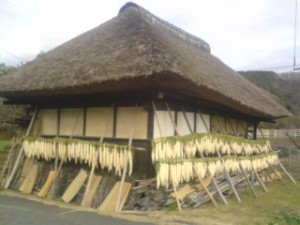 outside a takuan factory in Hitachi Omiya

Though these pickles are a representative food of winter, they are in fact eaten all year round. Until recent years, Ibaraki farmers usually ate them with each meal- or whenever rice was eaten ( still if someone makes rice-balls ( onigiri) for you they might give you an accompaniment of takuan. Obviously, in the days before refrigeration, it was a vital PRESERVED food.

Because of the ready and year-round availabilty of so many other types of delicious TSUKEMONO ( Japanense pickles), the consumption of takuan has certainly declined, and some have told me that they eat less takuan these days to keep keep their diet less salty. 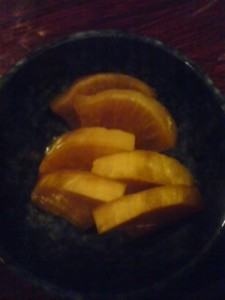 Takuan Served at Ajiyama in Tsukuba 2009

With the bed-town-ization of Tsukuba  proceeding at full-throttle we will be seeing less and less radishes hanging out to dry around here. One sad day, you might only to be able to find evidence of the custom around here in the archives of Tsukublog. Until that time, keep an eye out for them. They are out there hanging at this very moment!

I have written more about DAIKON here-