This Year, HATSUSHIMO (初霜), the First Frost, Comes Early and Suddenly to Tsukuba- Lets Hope Its a Fluke 5 November, 2009 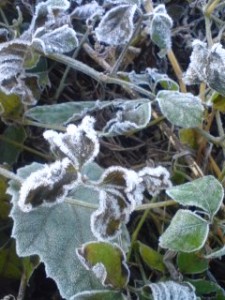 During the last weeks of October and the first two days of November, those of us living in Tsukuba  were basking comfortably in the glorious warmth of a KOHARU BIYORI  (小春日和 ), which is the Japanese equivalent of an Indian summer. Then, on Culture Day, the National holiday on November 3rd, temperatures dropped precipitously, and on that night I had to resign myself to taking out the little kerosene heaters which I had stowed away in my closets ( yes, I live the traditional Japanese lifestyle- without central heating). Since these cannot be left on all night ( because of the danger of carbon monoxide asphyxiation), I could hardly sleep at all, not yet accustomed to the cold, which had me shivering. 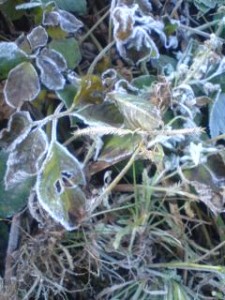 Since I was already up at the crack of dawn, I headed out , with my trusty dog Tickles ( a Japanese Shiba Ken), into the fields for our morning walk. Much to my surprise, the surrounding area had all turned white, covered by a coating of frost- the first of the year, which had appeared much earlier than I had ever remembered .

As I recalled, HATSUSHIMO (初霜), the first frost of winter, usually did not occur till mid-December in Tsukuba. In fact, when I checked the data later in the day, I found that the first frost has been showing up later and later over the years, as a result of global warming, urbanization and CONCRETIZATION ( in 1994-95 in Tokyo, the first frost did not hit until  Feb. 11 !!). 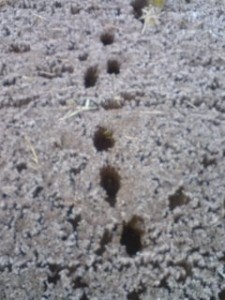 Surveying the withering late autumn fields covered in a thin layer of ice, I realized that winter was near ( but hoped that the freezing weather was just a fluke). Closer examination of the frosted over vegetation revealed its own special kind of beauty, and I could understand why the Japanese poets used the term SHIMO NO HANA ( 霜の花) which expresses the way that the frost itself can look like tiny, sparkling flowers.

This morning, when my dog and I were out in the fields again, it was much warmer.

Yet as I looked over the browning vegetation I kind of missed the frost. Though, I definitely COULD wait a while for its next appearance.