Twenty-Third Night Stones ( 二十三夜塔) in Tsukuba are Evidence of How MOON WAITING (月待) Prayer Meetings Once Thrived in This Area 12 October, 2009 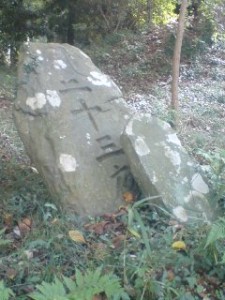 With their myriad KAMI (神 Gods) and Buddhas, and the various natural phenomena  which they have revered as deities, it should come as no surprise that the Japanese have traditionally regarded THE MOON with religious devotion. Being  (along with the sun) one of the two most outstanding celestial bodies, the moon, whose waxing and waning  was clearly seen as having an impact on the world around them ( the tides, the activities of animals, and most importantly: childbirth), became a popular object of worship in itself. This manifested itself not only in the famous  O-Tsukimi ( moon viewing) rites, in which the mid-autumn moon was given admiration, respect and prayers, as well as seasonal offerings, but also in a variety of  special moon-related prayer meetings which can be called collectively WATING FOR THE MOON Gatherings ( Tsuki-Machi,月待).

Depending on the hamlet ( mura, 村), a particular phase of the moon would be selected as a time for such a prayer meeting ( which also created an opportunity for comradery, and eating and drinking). The more popular of the moon phases  for these meetings were ( according to the lunar calendar): The 13th night, the 15th, the 17th, 19th, 23rd or the 26th night. These meetings (also called Koh, 講 ) would be held either every month, or on select months ( such as the 1st, 3rd , 5th  9th and 11th months- all odd numbered!) depending on the neighborhood.

To commemorate such gatherings sacred stone monuments were erected bearing the name of particular night they were held, and often, information about the number of people who gathered.

The oldest evidence ( in stone) of these events, at which later, usually only female, though sometimes only male neighbors would ( and still do) gather to wait for the moon to rise, while eating drinking and praying, dates back to the Muromachi Period (1392-1568).  The custom reached the peak of its popularity, however, in the Edo Period (1600-1868). And though they were held in many parts of Japan, they were especially prevalent in the Kanto Region (where Tsukuba lies). 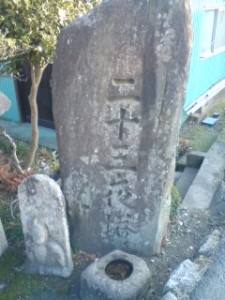 To this day, there are neighborhoods in Tsukuba in which the women gather ( once a month or  once a year) on the 19th of the month to pray for easy delivery and family health and safety. However, the original connection with the moon has been lost- these women now meet on the 19th- according to the SOLAR ( Gregorian) calendar, which does not reflect the moons phase. In fact, the women who attend these MEETINGS OF THE 19th NIGHT ( Ju- Ku- Ya Koh, 十九夜講) do not even watch the moon rise anymore! They just eat, drink, chat and chant sutras ( read  more : http://www.alientimes.org/Main/LadiesNightOutTheOldTimeWay ) 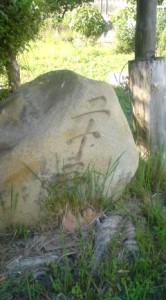 Another phase of the moon at which, in this area, it was popular to have MOON WAITING gatherings, was that which occured on the 23rd of the lunar month. I know this because of the fact that each  of Tsukuba`s old neighborhoods seems to have a fair share of sacred stones which read: 二十三夜- the 23rd night,( or a variant writing of that) .

What makes the moon of the 23rd night so special? Well, for one thing, it does not rise until midnight or later ! ( which is surprising since just a few days earlier the moon rises early in the night). Thus, these moon waiting sessions were a late night or even all night affair. When the moon finally does rise it is a mysterious half-circle.

Now since the villagers traditionally connected the phases of the moon with childbirth, there were many and varied beliefs connected with the different lunar phases ( and these seem to have differed for region to region).

One reason that these late  night (or all- night) meetings were held in certain hamlets is that it was believed that a child concieved on that night (the 23rd) would not be healthy, and thus either the women or the men would spend the night out  preventing any chance of conception!

After the advent of the Meiji Restoration ( 1868) and  its program of stamping out SUPERSTITION in order to promote modernization, these prayer meetings on the 23rd night ( and their sexual taboos) started to fade away.If they were  held, the reason given was that it was good luck to view the moon on the 23rd, or that on that night, a wish made would come true. hold belief that a child conceived on that night would be normal has been completely erased ( and good for that, too!) .I have no knowledge of any such meetings being held anymore in Tsukuba, though there are plenty of venerable stones ( some dating back to the early 17th century, though mostly from the 19th) to prove that the custom once thrived

(Another way to recognize a spot where these meetings were held is by spotting a SEISHI-BOSATSU stone. These feature a standing figure with hands together in prayer. While the 19th night prayers are connected with the NIYOIRIN KANON ( reclining with head resting in hand), the 23rd night meeting are connected with this figure, a Boddhisatva of Wisdom.) 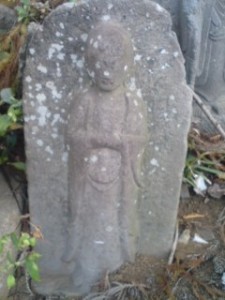