Their Amazing Blossoms Are Gone, But The Fruit Of the KARASU-URI (烏瓜) Have Started To Glow Deep Orange 9 October, 2009 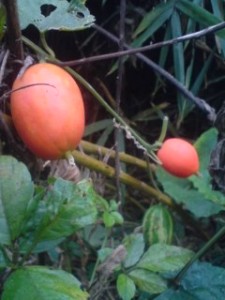 It seems like only yesterday ( though in fact it was way back in August) that we were admiring their intricately lacy white blossoms which bloom only at night. And though now these astonishing  KARASU-URI (snake gourd) FLOWERS have sadly withered away, the fruits which have replaced them on their vines are now taking on a deep orange hue, giving Tsukuba ( and Japan)  one of its iconic symbols of autumn.

Naturally much easier to spot than the flowers ( which only opened up in the dark ! ), the little oval shaped gourds are first green ( like little watermelons) but then stand out brightly, in orange, as they dangle at the edge of thickets and woods.

Though they do look temptingly delicious, these fruits are NOT edible. Inside they are nearly hollow , but they contain seeds which are bound together by a gooey liquid. This has been used traditionally  for treating cracked and chapped skin, chillblains and other skin problems ( I actually tried it on a rash and it worked! I just broke open one of the gourds and applied the goo!) 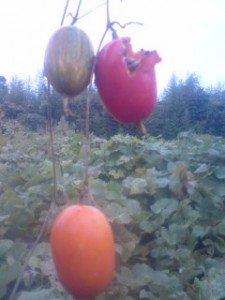 The gourds, as I have already mentioned, grow on a vine . It can be fun to tug on one of these vines when you see one of the dangling fruits and see how many of the little gourds are attached. It can be surprising how long the vines are and the complex paths they take. Its also amusing to see all the little egg-like fruits come dancing out from unexpected places as you keep pulling.

The name karasu uri (烏瓜), when directly translated means crow gourd. No one is exactly certain as to  why this fruit  is thus called. Of course many people assume that it is because crows eat them, and from the picture below you can see that SOME creatures do in fact eat them ( or pick at them at least). My interpretation of the name`s origin is slightly different. I feel that it implies something FOR THE BIRDS- in other words,of  no use to humans,  and which can be left to our fine feathered friends.

You might also see these fruit as part of seasonal decorations or flower arrangements. 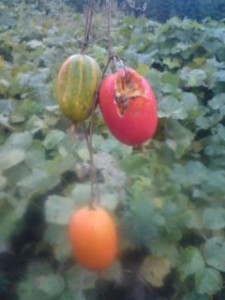