A Showing Of Provocative New Works by Thomas Mayers 28 September, 2009 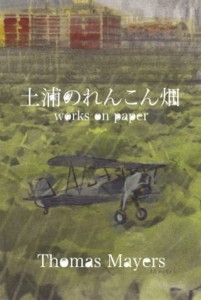 A little time spent by the shores of Lake Kasumigaura this past summer, affected British born artist-musician Thomas Mayers in a BIG way. In fact, the experience of that day (August 5th to be exact), and the feelings and thoughts it evoked, led to a veritable creative explosion, the fruits of which- 44  new paintings, will be on display at the Takashi Saitoh Gallery near Ushiku Sation from September 29th through October 11th.

For a previous show at the same venue Mayers also made extensive and effective use of lake related motifs ( at that time with a focus on Lake Ushiku), to create some of his most memorable and beautiful works . Visitors to his upcoming exhibit ( it starts tomorrow!), will find that his newest works show a new edge- they are more intimate and emotional. And while the paintings are still  beautiful, they are also challenging and deeply thought provoking. 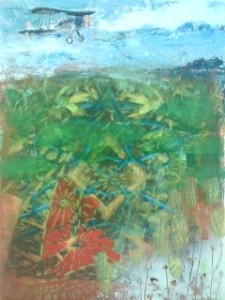 What exactly DID the artist encounter by Japan`s second largest lake on that steamy summer morning? What was it that stirred him to grapple with paper, oils, watercolor , spray paint, pencil and epoxy. What was it that kept him sleepless, reworking photos and etching on glass? Well,  according to Mayers, it was driving around and walking through the extensive lotus root fields just by the lake that filled him with all the conflicting emotions which then HAD TO BE WORKED OUT through his art.

The scene he found in Tsuchiura`s Okijuku and Tamura neighborhoods, potentially one of idyllic beauty- lake, traditional hamlets, lotus flowers in bloom everywhere, was marred by the ubiquitous presence of scraggly nets, which virtually covered the landscape and stretched out to the horizon. And even more jarringly, upon closer observation, he found dangling in these nets, like strange fruit, scores of dead birds of various breed, size and color.

As an artist and a person, Thomas Mayers is extremely sensitive and ever questioning . Each time I meet him he seems to be in a continuous dialogue not only with me, but with the world around him. Carefully examining his latest works, it is clear to me that in the first place his trip down to Kasumigaura, an area whose  history he is deeply familiar with from the writings of  well-known Tsuchiura-based writer Junichi Saga ( Memories of Silk and Straw), brought to his mind certain iconic images of pre-war Tsuchiura- propellor powered sea planes and zeppelins, as well as an array of colorful local characters he had read about.

The harrowing site of the ugly nets and the unfortunate birds caught in them then obviously aroused another stream of images in the artist`s mind, especially those associated with the writings of novelist Shusaku Endo and Christian martyrs.

What we have then in this new show are 11 larger and 33 smaller works in which the artist has singularly compressed layers of local and PERSONAL history onto Japanese washi paper. Working from photos he had taken on THAT DAY he tried to capture the resonances each image created in his mind. And , instead of turning away from and pretending NOT TO SEE the ugliness and horror, as so many artists and photographers do, Mayers bravely works them into his pieces, focusing not only what he saw, but on what he heard, tasted ( in the air), and even what he smelled.Bravo!

All in all he has put together a daring, challenging and powerful exhibition.