For Getting a Look At One of Japan`s MOST AMAZING FLOWERS (the karasu-uri no hana) a Flashlight comes in handy 17 August, 2009 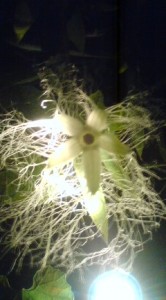 The Lace-like karasu-Uri No Hana

Out for an early morning walk with my dog, something exciting caught my eye. The edge of the thicket which lined the path we were strolling along was dotted with what looked like scrunched up  white balls of cotton or fur. I took a mental note of the exact location, because I knew that I would have to come back AFTER DARK, with flashlight in hand, to see these little fuzz balls open up into one of the most amazing blossoms I have ever seen- the karasu-uri no hana (烏瓜の花), the flower of the SNAKE GOURD vine, which blooms only at night ! 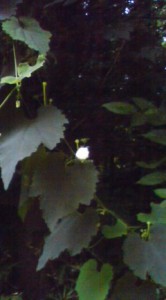 Karasu Uri No Hana, Unopened In The Morning ( Konda, Tsukuba)

When I returned, well after the sun had gone down, I was not disappointed. Most of the little balls I had seen earlier in the day had opened  up ,  extending lace-like filaments, fantastically intricate and delicate looking, more like something that you would find living underwater than on land. 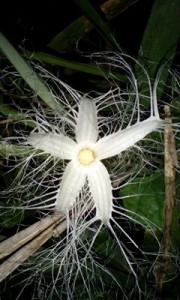 Karasu uri no hana in Konda Tsukuba
Its a bit sad for me to think that  so few people ever get a look at the flower of the karasu uri, despite the fact that it blossoms COMMONLY, thoughout Japan in  summer. The plant on which it grows, which is a vine, is most recognizeable in autumn, when its fruit, which is bright orange and egg-shaped, stands out strongly as the only bit of color remaining after the summer foliage has fallen away. This fruit is a gourd, and has traditionally been used for medicinal purposes or cooking, not only in Japan, but also extensively in South and South-East Asia. Unfortunately, the fact that the plants flower DOES NOT OPEN IN THE LIGHT is what has keeps it a secret from so many, even from those in whose garden it grows! 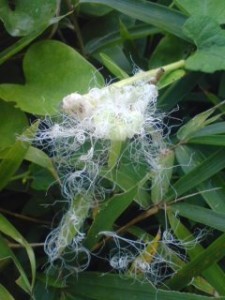 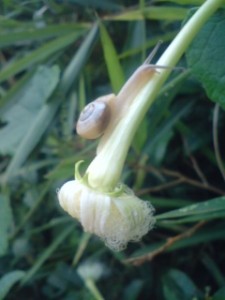 ( Snail on Snake gourd flower closed up in the morning ( Konda, Tsukuba)
As part of this posting I have uploaded a few pictures that I have taken with my cell-phone camera. Please take note of the shots of the unopened flowers taken in the day-time. They will help you to find the locations to which you can return to AT NIGHT, with flashlight, for a look at at one of Japan`s most incredible flowers. And since my own cell phone photos do not do justice to their subject at all, please check out other  pics which can be found online. You can search under 烏瓜の花 , snake gourd flower, or the scientific name for this plant, which  is TRICHOSANTHES CUCUMEROIDES. You can see a good shot of the flower and the fruit here-
http://aoki2.si.gunma-u.ac.jp/BotanicalGarden/HTMLs/karasuuri.html
and another good shot of a group of snake flowers here-
http://commons.wikimedia.org/wiki/File:Trichosanthes_cucumeroides0.jpg 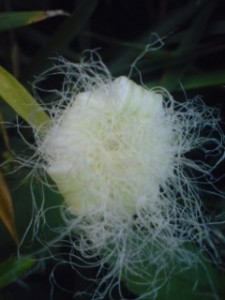