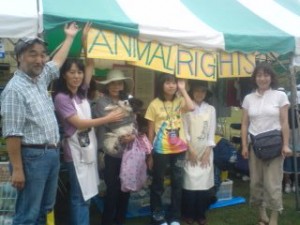 For animal lovers, Japan can be a very stressful place. Even here in Tsukuba, where life in general is quite pleasant , one has to somehow accustom oneself to the daily sight of broken-spirited dogs kept their whole lives in cages or boxes hardly larger than themselves, or tethered to extremely short chains with no shelter from the sun or rain, surrounded by piles of their own waste. And who living here has not had their peace ( of mind) disturbed  by stir-crazy dogs whose ONLY  options for exersize or stress relief  are  barking , howling, or yelping.

Another surprisingly pitiful state of affairs is the lack of proper animal shelters, where stray cats and dogs, or kittens and puppies could be taken to when found. As a long time resident and one of the writers of this blog, one of the most frequently asked questions I get is-:  Ive found a homeless kitten (or puppy). What should I do? Who should I call?

Im sorry to say that the only answer I can offer is- Hold onto it yourself until you can find someone to adopt it. 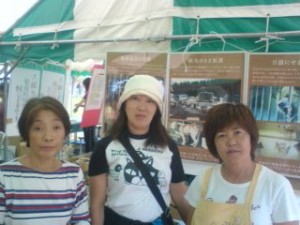 The alternative to that would be to bring the animal to the city office, where it would be held for 3 days  in a filthy, windowless, foul-aired holding shed (some kittens are actually killed by rats there! Even those that are retrieved by owners or adopted by someone often contract severe illnesses at these unsanitary pounds) before being taken to be killed in Kasama.

I guess you could say that this would be a better fate than being sold to a supplier who would sell them to be used in some ( possibly horriffic) experiment.

Being a great lover of nature and animals myself, I had often searched for like-minded people in an around Tsukuba to help fight for various humane and enviromental issues. And though I have found certain individuals willing to help out, I was not aware of any group or organization which existed around here, dedicated to helping animals.

That is why it came as a SHOCK (though a very pleasant one), to find, among all the food stalls and buskers of Matsuri Tsukuba, not one, but THREE booths set up by various animal welfare groups  who are active in Tsukuba. 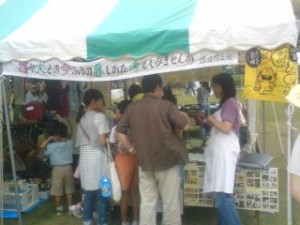 The first of these was the SUTENEKOBOUSHI KAI ( 捨猫防止会), literally the Society to Prevent The Abandonment of Cats and Kittens, which according to its representative in Tsukuba , Makomi Tsuruta, tries to educate the public about humane treatment and cat care and also promotes  neutering in order to keep the homeless cat population under control. Their homepage is:

Then there was the DOBUTSU AIGO WO KANGAERU IBARAKI NETWORK ( 動物愛護を考える茨城県民ネットワーク), the THINKING ABOUT THE HUMANE TREATMENT OF ANIMALS IBARAKI NETWORK, which was represented by Horiyuki Sakamoto. This group tries to pressure the local govermant to legislate for a more humane society. They are now focusing on the building of a better holding center (dog pound) at the future Tsukuba City office. Mr Sakamoto can be contacted at 0298 51 5580.

actually goes to the holding facilities (pounds) and checks on conditions. They also try to rescue as many animals as they can by finding them homes. They need both volunteers and funds!

In the same booth I was happy to find Hisako Horie, who lives in Ushiku and represents ALIVE, a nationwide organization which works to make it Japan a better country for ALL ANIMALS and also to protect Japans environment. Please check out their website:

It was enlightening to speak with Tomoko Watanabe (who spends large parts of her earnings, as most of these activists do) on helping care for homeless animals. She explained how difficult it was, in Ibaraki Prefecture and especially in Tsukuba, to help find homes for dogs and cats who need them. So far, permission has not been gotten to set up adoption displays near Tsukuba Center and activists around here who want to do this have to travel with the animals all the way to Saitama Prefecture (every Saturday at the Minami Koshigaya Station), where passersby can see them and possibly take them home.

If you are interested, this Wednesday (September 2), these activists will be going to the Kukizaki City Office to submit a pettion for a more humane holding facility. Why dont you come along. We will meet at the Andersen Bakery at 9:30 am.

Lets make Tsukuba (and Japan) an EVEN BETTER PLACE than it already is!