In Japan, Those Who Did Not Give Up Despite Overcast Skies, Were Rewarded With Unforgetable Views Of Partial Solar Eclipse 23 July, 2009 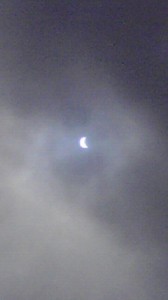 Through the clouds- a partial solar eclipse on July 22, 2009. Photographed in Tsukuba, using a cell-phone camera

Like most other peoples, and probably even more so, the Japanese get very excited about SPECIAL EVENTS and occurences, especially after lots of hype created by the enthusiastic MEDIA. And though on a world-wide scale, eclipses of the sun are not THAT rare, it is NOT often that these celestial events can be observed more than once or twice during ones lifetime from right outside ones own home. So as you can imagine, excitement had been building over the past few weeks over the the partial solar eclipse which was scheduled to occur on the morning of Wednesday July 22nd. This was to be the first solar eclipse to be observable from Japan in many decades, as well as the last one to be seen from these parts for a long while. Since it would be the school summer holiday, many special events were planned for kids to gather and share the excitement of the event at nearby viewing points. It was encouraging that at the end of July the  interminably overcast rainy season would most probably already be over, with the high , clear blue skies of summer providing unobscured views of the the rare phenomenon. And though the Meteorological Agency HAD in fact declared the  TSUYU (rainy season ) over, when the long-anticipated day of the eclipse finally arrived, it was rainy and the skies were overcast. Many who had been looking forward to the event for weeks (or even years),  simply GAVE UP on catching a glimpse  of the sun being partially blocked out by the moon WITH THEIR OWN EYES, and instead opted to watch the TV broadcast of the TOTAL ECLIPSE ( which could not be seen from mainland Japan) as observed from camera crews based on ships around Japan`s outermost islands.

Those who gave up on seeing the eclipse did so TOO SOON, as the moon slowly moving across the sun was clearly visible (in Tsukuba and Tokyo ) through the clouds. For all of those who were patient and persevered, it was a truly unforgetable, thrilling, and for some- a near-mystical experience.

Tomorrow, I will continue with this topic in a discussion of the possible impact of solar eclipses on Japanese mythology and religion, and I will also share with you  my own four minute encounter with TOTALTY during the eclipse of February 26, 1998 on the Island of Curacao in the Netherland Antilles. Stay tuned!