Tsukuba Becomes A WATERWORLD As Rice Transplantation ( Taue) Gets Underway 2 May, 2009 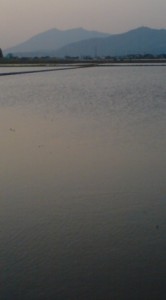 If one were to have a window-seat on a daytime flight out of Narita airport in mid-April, down below, on the Kanto Plain, one would see densly packed clusters of houses,the small scattered green islands of evergreen trees (mostly cedar)which grow on uncultivatable hills, and between them, the dull, lifeless, brown and straw colored spaces where the rice is grown between May and October. Then, if that same person would fly back to Narita about two weeks later, again with a seat by the window, they would  probably gasp in astonishment when they looked down below, as they would  have witnessed what is surely the most dramatic annual landscape tranformation which takes place in this area (where there is practically no long lasting snowfall)- the creation of a veritable WATERWORLD as the rice fields are flooded in preparation for the transplantation of the young rice plants. 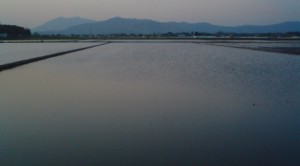 The scene from ground level can be just as impressive, but in a different way, with the mirror-like surfaces of the flooded fields dotted with egrets ducks and herons. Then, at night, there is the crazed chorus of frogs who sound as if they just CANNOT contain the sheer joy of having been so well watered. 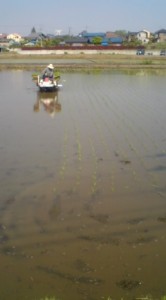 In Japan, the first week of May has a string of national holidays in it making up what is known as Golden Week. The original intention behind the creation of what is now a popular time for the Japanese ( and foreign residents in Japan) to go on a vacation, or just take a well needed rest, was to provide the rice farmers, most of whom also work regular jobs,with the time to do the rice transplanting. Since the 1970`s and the widespread availability of mechanical transplanters, this task has become much, MUCH easier than it used to be, when nearly everyone in the village would have to lend a hand to help complete the long, backbreaking labor. Now, with the help of the machines (which most of Tsukuba`s rice farmers own), the work can be done by one person, in less than an hour (for one field). 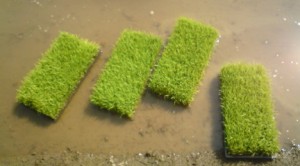 If you take a walk, bike ride, or drive, around the Tsukuban countryside this week (like Ive been doing for the past few days), you will be able to see the tranplantion (ta ue 田植え, in Japanese), for yourselves. The farmers are usually very friendly and happy to chat about rice production. If you are lucky, they might even let you try your hand at some transplanting (though the farmers who let me have a try surely regeret that they had!).

Some of you (from non-rice growing regions), might be wondering what I mean by TRANSPLANTING, instead of  just plain PLANTING. Well, let me explain a bit about what the farmers have to do in the early stages of the rice cultivation cycle, between late March and early May(of course timings are different in warmer regions like Okinawa and parts of Kagoshima where farmers can get TWO rice harvests per year). 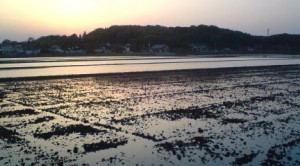 In most regions of Japan, the process of growing rice begins in late March. It is then that the rice seeds are planted in soil in seedling trays (IKUBYO-BAKO, 育苗箱), which are then placed in incubators (IKUBYO-KI, 育苗機) which maintain temperatures at about 30 degrees centigrade. After about 3 days, white shoots appear and when these reach a length of about one centimeter, the trays are moved to large greenhouses, where they will be grown under controlled temperatures for about one month and the plants reach a length of 7 or 8 cm. These days in Ibaraki, and the rest of Japan, this process is often now taken care of by NOKYO, Japan`s huge and powerful agricultural cooperative. In past ages, however, rice seeds were planted in soft muddy soil, and then the seedlings which survived were transferred to the flooded fields.

In Mid-April, just as the cherry blossoms are often starting to drop away, the farmers begin preparing the fields. This is called Ta Okoshi (田おこし) in Japanese (literally- Awakening the Fields). Aftert the stagnant and freezing winter months the soil must be plowed. Of course in the old days, this was again BACKBREAKING labor for both humans and beasts of burden (horses and oxen). Todays tractors do the works 15 times more efficiently. The soil is usually plowed up to a depth of 12-15 cm,  optimal the rice plants to take strong root.

When the plowing is done, the fields are also fertilized. In the old days, the fertilizer was of course all organic (fermented plant and animal waste matter), but now most farmers also use chemical fertilizers.

Then, at the end of April, the fields are flooded. This characteristic of rice culture , which involved a communities sharing of water resources is often pointed out by Japanese scholars as being the main reason for Japa`s having developed its unique group oriented culture (but is Japanese culture the same as that of other rice growing cultures which shared water resources?).

In the earlier days of rice cultivation in Japan, this all important crop could only be grown near wetlands, lakes or rivers. Water would be diverted to fields just before transplantation. In later years, new rice field could be developed by the creation of canals and reservoir. These days, rice fields are flooded and drain with pumps and built in pipes, which makes everything much more effecient.

Finally, in the first week of May, we get to the part that you can witness this week at various palces around Tsukuba. The trays of seedlings are brought out and placed in the tractor-like transplanting machines. It always amazes me how the farmers make such straight beautiful rows .

Have a great Golden Week!