Fuji Flowers Create a PURPLE HAZE Overhead, but For some real WISTERIA HYSTERIA Head Out For Ashikaga 1 May, 2009 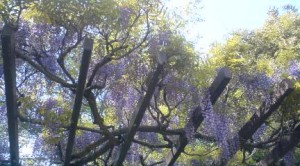 From  my house I  have a clear view of the of the doomed Nakane Konda-Dai Woods. I spend some time each day gazing out over these last remaining wilds of Tsukuba, trying to savor their beauty as often as I can before the bulldozers show up at the end of this year. Over the past two weeks, I have been able to observe how , what were at first small patches of  light violet, have almost completely taken over the thickly foliated forest canopy, which now seems to be enshrouded in a purple haze. This morning, having some time to spare, I took a 3 hour hike in these same woods, and most of the time, whether I looked up towards the sky or down on the ground, it was this the same color- FUJI COLOR (fuji-iro ), the color of wisteria, that I saw. The winding vines of these endigenous plants creep up trees as high as they have to go for their flowers to get sufficient sunshine (suffocating many trees in the process), while the petals of these flowers which form in bunches, not unlike those of grapes, are rustled in the wind, and scattered onto the forest floor. With spring`s  loud and constant call-and-response chorus of  birds and the sweet, syrupy smell of the wisteria (藤, fuji) flowers themselves, I all but forget about the modern world (though in fact I was within easy walking distance of Tsukuba Center and the TX train terminal). 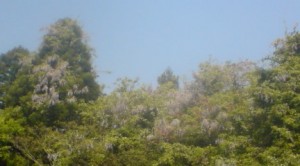 Fuji Taking Over The Forest Canopy In Tsukuba

If you have not yet noticed the FUJI high up in the trees, you might have run into some growing on the specially designed wisteria racks (fuji-dana) which can be found in many of Tsukuba`s (and the rest of Japan`s) parks from late April through May. These fragrant and very elegant flowers have long been a beloved symbol of late spring in Japan, and  are deeply connected with classical Japanese culture.. In fact, they are the first flowers ever mentioned in Japanese literature. One chapter of the Kojiki(712), the official collection of founding myths commissioned by the ancient Japanese Court, tells the story of  the very desirable daughter of the Deities of Izushi. There were two brothers, also sons of deities, and the older brother, after having failed to win the affections of the fair Goddess, challenged his brother to try his hand at winning her hand. This older sibling said that if his brother were successful in this venture he would give him clothes and wine and other delicacies. The younger brother told his mother about this ( my guess is that they had different mothers), and the mother, in an effort to help her son made him footwear and clothes, as wel as a bow and arrow, from wisteria vines. When the young deity arrived at Izushi-Otome-no Kami`s (the girl`s) home, these all tranformed into wisteria blossoms, and the girl(goddess) bedazzled by these strangely beautiful flowers took him as her lover! 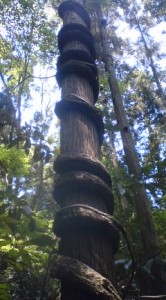 In the Manyoshu, the earliest (and some think the greatest) collection of Japanese poems (compiled around 759 AD), there are 27 poems which mention FUJI (the flower, not the mountain). Here is an example which uses the image of the wisteria bunches rustling in the wind, like waves (fuji nami, 藤波）: 藤波の花は盛りになりけり平城の京を思ほすや君（FUJINAMI NO HANA WA SAKARI NI NARIKERI NARA NO MIYAKO O OMOSUYA KIMI) which I very roughly translate as- When the fuji clusters in full bloom blow in the wind like waves- I remmember Nara, the capital, and YOU who remain there. 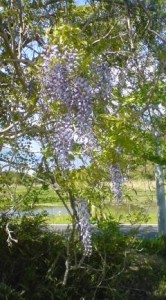 In the Heian Period (794-1185) the Golden Age of classical Japanese culture, the wisteria, and its color (fuji-iro or FUJI COLOR), was very highly regarded for its beauty and elegance. This might sound ridicuolous, but several Japanese sources tell me that there is also a connection to the fact that this period`s most powerful family was the Fujiwara (藤原）, with the characters used for writing this name meaning WISERIA FIELD ( I still cant figure out if this means that the family took on this name because of the flower`s prestige or the flower grew in prestige because this great family was called the Fujiwara!). No matter which is true, purple and all its shades came to be a symbol of the aristocracy and elegance (Sei Shonagon even writes about this in THE PILLOW BOOK- Makura No Soshi).It is interesting to note however that the FUJI COLOR so important as a dye at that time was not created with wisteria, but with a combination of indigo and beni blossom dyes. The color achieved, though, was like that of wisteria and was considered the color of colors (iro no naka no iro)by the Heian Elite. 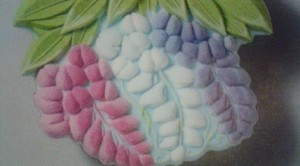 In the Edo Period it was popular for the wealthy to send a gift of Japanese sweets in the shape of things which began with the syllable FU. This is becaue the word for lucky FUKU, begins with the same sound. Thus, famous sweet makers such as TORA-YA created pretty little snacks in the shape of FUJI (wisteria), Mt. Fuji, Futamata Daikon (two-pronged radishes) etc, and packed them in boxes shaped like ship (FUNE, also beginning with FU). 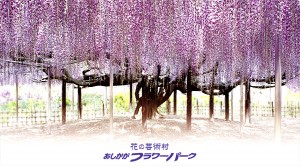 Here is how to get there:

For other articles ive written on this seasons flora and fauna see: