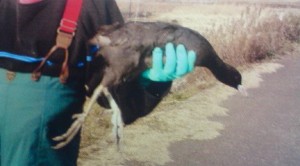 A Bird In Hand

Since Tsukublog first let the world know about how large numbers of wild birds were regularly getting entangled, and slowly starving to death in government funded agricultural nets on the shores of Lake Kasumigaura, concerned residents, both Japanese and foreign, have been making heroic efforts, coming from afar and slogging through waist deep muck (often covered with a layer of ice!) in all sorts of harsh weather conditions, in order to free as many birds as possible from their pitiful state of SUSPENDED ANIMATION. At the same time, efforts have been made to lobby the prefectural government, and get them to stop subsidizing these deadly and INEFFECTIVE nets, or better yet- order them to be taken down.

After 2 years of struggling, we believed that we had been making some progress. The story has appeared several times in the local Japanese press, slightly damaging the lotus producers public image , and the nets themselves have been getting older and all tattered. It seemed to us that some of the farmers were taking the nets down, and without government money, would not be putting new ones up. The prefectural government in Mito also seemed to be very receptive to our appeals. We thought we were seeing the light at the end of the tunnel. 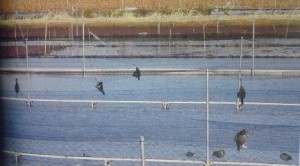 Is Better Than A Handful In the Nets!

How wrong we were! While Ibaraki Prefecture will NOT allot money for further net subsidies, we found out indirectly, from an article in a local Japanese paper, that Tsuchiura City WILL BE giving  NOKYO and the net companies a whole lot of money for ALL NEW NETS. We felt like we were sucker punched when we got the news. And this happened right in the heart of the migration season, when thousands of birds, mostly teals,coots and moorhens, but sometimes owls and hawks, need our help!

Why cant Tsuchiura City even LOOK INTO the possibility of cheaper, more effective ways of protecting the lotus fields (and do the birds REALLY do so much damage?). When asked, they say that they can ONLY subsidize nets!

I believe that if the general Japanese public becomes aware of what is going on, Tsuchiura City will HAVE TO order the nets be taken down. Till now they have been doing a good job of keeping things hushed as the story has not been fairly reported in any major periodical. Local journalists have told me that they have been pressured NOT to write about this topic, and when they do, the UNDOCUMENTED claims of  huge damage caused by birds takes precedence. These articles do not question why such large sums of money were given to net companies without there having been any data available on their effectivenenss.They do not mention that there are alternative ways of keeping birds away from the fields. I will also go as far as to say that even if the birds did cause severe damage it would not justify the use of these nets which indiscriminately entangle numerous species, many which could never be suspected of eating lotus roots(including protected species).

If you would like to help with bird rescue or lobbying against the nets, or if you have any good advise, please contact us.

For more details and pictures read the other postings in Tsukublogs Kasumigaura Bird Rescue category.