The Brown-Eared Bulbul (Hiyodori) Might Be An Everyday Bird Here In Japan, But You Wont Find It In Many Other Places 15 March, 2009 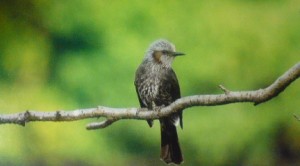 Throughout the year all sorts of birds visit my house, or should I say my front yard, which is located at the edge of Tsukuba’s soon to be cut-down Konda Nakadai Woods. Some species hang around my neighborhood all year round, while others stay just for one season. Then there are those that just drop by for a little refueling and relaxation in my garden as part of their  annual migrations. 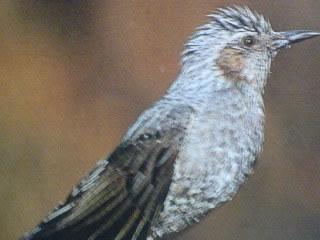 Of all these birds, some colorfully-plumed, some beautifully voiced, some, like the pheasant (Kiji) impressively large, or majestic like the goshawk (O-Taka), I have come to LOVE MOST a gray, drab looking, scruffy headed, screechy voiced rascal, a little smaller than a pigeon. Since at least the Heian Period (794-1192), the Japanese have called this bird the Hiyodori （probably because the Japanese hear its cry as HIYOO), while in English it has come to be called the brown-eared bulbul (hypsipetes amaurotis). 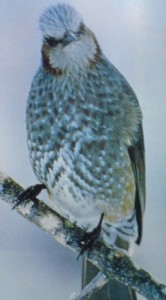 The reason I have grown so fond of the Hiyodori around my place is that I have actually developed a RELATIONSHIP with them, and though they sometimes do go off somewhere, sometimes for months out of the year, they always come back to my garden, greeting me early in the morning with their cry — which to my ears sounds more like GYAAA! They then fly around the house looking into the windows, calling me to throw out some fruit. And in a most dog-like manner, they faithfully fly to greet me, noticing me from hundreds of yards away, every time I come back home. Many people refer to these bulbuls as Avi’s Birds, and I have have come to feel about them that way myself.

Hiyodori will eat just about any fruit you put out for them (especially kaki, apple, and mikan), and even drink juice from a glass. They also will suck the pollen out of your sazanqua or camellia trees in late winter, and then from cherry blossoms in spring. They also like bread. Some of my neighbors are annoyed to find that all the nianden berries in their garden have disappeared in a day (brown-eared bulbuls love red berries!). Unfortunately, in recent years they have also started to raid cabbage patches, and have come to be called pests with the farmers calling for some sort of action to be taken (uh-oh).

It is interesting to note that these birds have changed their living habits in the past 30 years. Older farmers have told me that in the old days these hiyodori only came to residential areas in the winter, and apparently spent the rest of the year in the mountain areas. In recent years, however they have become a year-round city and suburb bird.

And though this bird is quite plainly plumed and can be found commonly throughout Japan, short-term foreign residents of Japan should take note of it and savor its presence, as this type of bulbul can only be found in the Japanese islands, the northern Philippines, Taiwan, and the Russian far east.

As we enter the mating season I think that you will be hearing and seeing this bird just about everywhere in Tsukuba. Stop and take a look at it. If you put some fruit out, you just might make some new friends.