Drop Everything And Go See The Dazzling Kayama Matazo Retrospective — You’ve Only Got Till March 2nd! 1 March, 2009 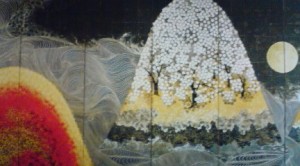 I had been hearing and reading great things about the big retrospective of Japanese artist Kayama Matazo’s (1927-2004) work, which is being held at the  National Art Center in Roppongi, but none of the raving comments could have prepared me for the powerful effect that the DEEP AND INTENSE beauty of his works had on me. Before seeing the exhibition today, I did not think I would be writing anything about it since it has been so well publicized. But my head is still spinning from this truly great assembly of works and I thought that I had better urge anyone interested in art to drop any plans for tomorrow or Monday and catch the last days of this show. Simply put, it is dazzling. 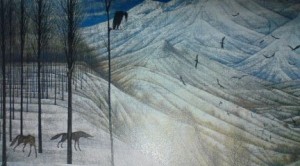 Kayama was the son of a Kyoto kimono designer, who came of age just after WW2, when Japan had been literally bombed back to the stone age. Maybe that is why, when searching for a style to work in, he chose the same animal motifs treated by the neolithic artists who painted the murals of the Lascaux Caves, or the prehistoric creators of Japans Haniwa (clay figurines). His early winterscapes with wolves and ravens perfectly capture the dog eat dog world of Japan back in the ruins of those early post-war years. 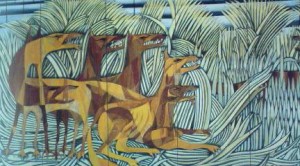 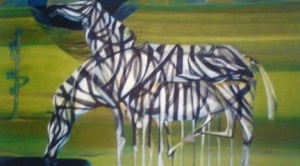 He continued to paint animals, while trying out styles reminiscent of the surrealists, symbolists, and fauvists. Animals are a theme Kayama would come back to again and again in his career, and his feeling for them can be felt in his loving renderings, especially of cats and birds. 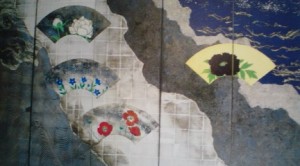 He then turned to traditional Japanese motifs, which he had absorbed like mother’s milk growing up in Kyoto, which he used in new ways (for example having autumn and spring scenes in one painting), in an attempt to eliminate TIME from his works. ALL of his fans, waves, full moons, and cherry trees are used tastefully and to great effect. 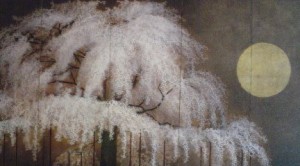 Sometimes his rendering of traditional wave patterns reminded me of aboriginal painting, with the multiple lines tingling my retina like Thai food tickles my tongue. 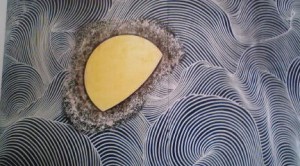 As you wander through the exhibit (I kept going back to the beginning and starting over each time I reached the end!) is like a walk through the history of Japanese art, and you will find the influence of nearly all the great schools of Japanese painting (there are even a few ink paintings — sumi-e).

The retrospective also displays Kayama’s kimono, ceramic, and jewelry designs. Once again, I found everything DEEPLY beautiful and in perfect taste. 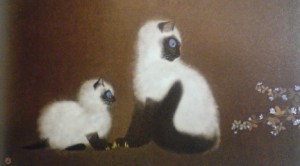 It’s already past midnight and it’s been a long and over-exciting day, so I will stop here. Go and see the exhibit for yourself. There are only 3 days left!

In front of the airport-like building are trees decorated with purple, frisbee-like, plastic dishes. From far away they look like an amazing new tree. From up close, they look… well… like trees with purple frisbees in them.

You might not believe this but a few hundred meters away, at the Suntory Art Museum in the Tokyo Mid-Town Complex, there is an equally recommendable exhibition of the treasure of the Mii-Dera Temple in Shiga. I will tell you more about it another day. You can easily combine the two shows for an art-viewing marathon as I did today, but I think it’s a little too much stimulation for one day.