Tsukuba’s Central Park Pond Gets A Scrubbing (And its Carp Get Sucked Away) 15 January, 2009 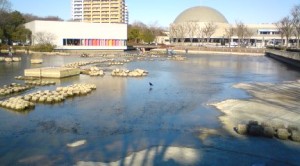 Your nose might have given you a hint of what was going on, as it might have detected a moldy, swampy odor, as you headed towards Tsukuba’s Central Park to feed the numerous carp and/or ducks that live in its pond. Even if you didn’t catch that peculiar smell, as the pond came into view from afar, you surely would have noted with curiosity how a group of people, clad in WORKER’S uniforms, seemed to be wading in the water. As you got nearer, though, you would have realized that the pond was in fact EMPTY, with only a thick layer of muck coating the bottom and glistening in the sun. 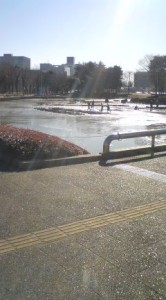 Yes, it’s a disappointing scene. Especially for all the little kids, armed with bags of bread or carp pellets, who were looking forward to feeding the pond’s hungry minion of little critters. Many children, bursting into tears, have to be dragged away by their mothers (annoyed at having to quickly improvise another way of amusing their kids).

If you have come to feed the carp, however, don’t turn back right away! Some of the colorful fish have been moved to the separate section of the pond nearer to Expo Center. These remaining carp (which must represent a fraction of their usual numbers in the pond) seem quite nervous, and uncomfortable, and very much in need of some feeding.

Curious as to what happened to the rest of the carp, I sought out the work-crew’s foreman and asked him about what was going on. He said that they moved as many of the fish AS THEY COULD (dekiru dake), to the separate section of the pond. When I interjected that most of the carp seemed to be missing, he responded by repeating what he had just said, though this time with an intonation suggesting that I use my imagination, “WE MOVED AS MANY AS WE COULD”. This was his delicate way of communicating that the rest had been SUCKED UP by the vacuum trucks which had been used to empty the pond. 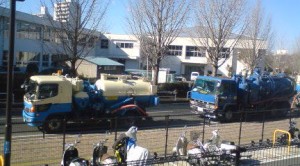 When I asked if they had found anything interesting while doing the job, he said that they found some turtles and a catfish, which he assured me were placed in the other section of the pond.

Since this is the first cleaning in about ten years, it is going to take much more time than expected to DE-MUCK the bottom. So expect the pond to be OUT OF ACTION for a few weeks!

Don’t forget that there are still carp in the separate section, near the Expo Center, and they look MIGHTY HUNGRY!

Though the usual ducks and egrets are not to be seen, other birds can be seen taking advantage of the new environment created by the cleaning work, especially HAKUSEKIREI, the white wagtail.