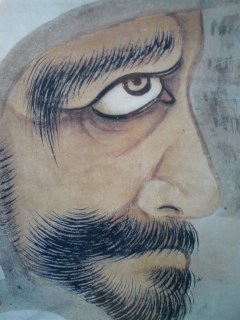 Cartoon characters have become Japan’s most important cultural export, and I’ve heard that the total sales abroad of anime, manga and their related merchandise have grown to surpass even those of the automobile industry. Anpanman, Doraemon, Ultraman, Pikachu and their friends have become hugely popular, even household names, not only in Japan, but in many countries around the globe, as Japanese artists continue to prove that this Land of the Cult of the KAWAII (cute), is THE major comicbook and cartoon character powerhouse in the world. In addition, nearly every major event, sports team, train line  etc, has its own mascot character. 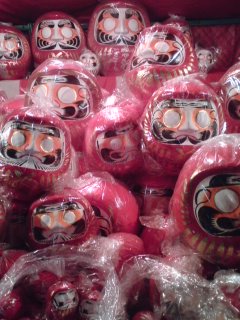 If you have visited a temple or shrine during these first few days of the new year, you will have surely seen stalls set up for selling what are probably Japan’s longest continuously (and probably best) selling CHARACTERs of all time – the (usually) red-robed, bearded, arm-less, legless and eyeless, Humpty-Dumpty-like dolls, offered in various sizes and prices (usually for 500 to 10,000 yen): the Daruma-San. Though these iconic, paper-mache figures are not specifically O-Shogatsu (New Year’s) decorations, they are considered to be highly auspicious (engi-mono), and are often bought on appropriately auspicious days. They are used in this way. If you have anything important you’d like to wish for, or even better, if there is something that you are really willing to make an all-out effort for, you buy one, paint in the right eye and then set it in your home (company, office etc.). If your wish comes true, you paint in the other eye! It is common to see scenes of this being done by politicians who have just won an  election or by the manager of the baseball team that has just gone all the way.

The most impressive point for the Japanese who heard the legends of bodhidharma, was the man’s (and his disciple Eka’s) super-human determination. To be specific, after having travelled to China, the monk settled in a cave near the Shaolin Temple, and proceeded to meditate, with the hope of achieving SATORI (enlightenment), for the next nine years! When Eka (Hui K’o, in Chinese, Dazu Huike in English), was refused repeatedly to be allowed to become the master’s disciple, he finally resorted to cutting off his arm and presenting it as a powerful petition which could not be refused! (Years ago in Southern Nepal, my friends and I crossed over to an island at a spot where three rivers met to meet with a holy-man who had been cutting off bits of his arm every year!) It is not strange that the Japanese warrior class found these stories to be inspirational, especially given the additional stories of BODIDARUMA having been a great martial arts teacher. 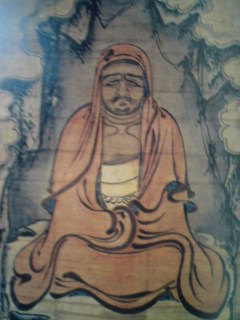 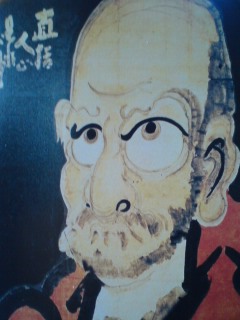 Of course, the beard and mustache are in accordance with the story of Bodhidharma being a hairy, non-Chinese. More interesting, however, is the matter of the eyes.

As I said earlier, Chinese sources stated that the monk’s eyes were blue. In early Japanese Zen painting this was usually executed by making the irises light brown. The creator of the present doll form, however, did away with the eyes completely, creating only disproportionately large white circles (COULD THIS BE THE ROOT OF THE STRANGELY ENLARGED EYES OF ALL MANGA AND ANIME CHARACTERS?). This also is in accordance with Bodhidharma’s legend, in which he supposedly nodded off for a bit sometime into his seventh year of meditation. Disgusted with himself, and determined not to do so again, the man with the will of steel ripped off his own eye-lids. It is said that tea bushes first sprang from the spot where the bloody lids landed. The tea would help future monks stay awake during their own meditations.

The Japanese were obviously deeply impressed by the story of Bodhidharma, and came to associate him with a fierce determination to accomplish one’s goals. He was also revered as a martial artist and as the man who was said to have brought forth what would come to be a great elixir in Japan, green tea. Daruma-San was clearly someone to be appealed to when you made up your mind that you REALLY WANTED SOMETHING.

Since the Daruma dolls as we know them today were created and popularized, the meanings behind the doll’s features have been forgotten by most. Still these dolls remain one of the most recognizable, and beloved CHARACTERS in Japanese culture. At shrines and temples this week you will see them on sale at stalls. Nearby you will see booths selling the DARUMA’s descendants, Anpanman and Ultra-man (amongst others), in blow-up doll or mask form. 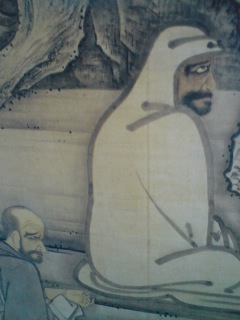 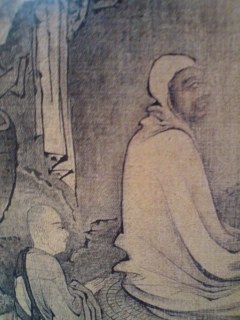