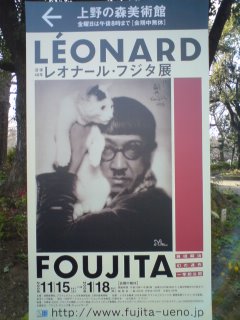 I have always been more deeply struck by the artist Tsugeharu Fujita’s LIFE STORY, or more specifically by the way he was successfully able to create and recreate HIMSELF, depending on the particular time or place he found himself in, than in his actual works. In fact, the more I think about the way he changed  costumes and political positions — PERSONAS — I realize that probably, it was this LIFE AS PERFORMANCE ART which was his greatest creation.

Born in Tokyo in 1886, the son of an army doctor, after graduation from the school which would later become the Tokyo University of Fine Arts and Music (Geidai), Fujita moved to Paris and went on to succeed there, spectacularly, where most of his fellow Japanese modern artists would fail, miserably. With flamboyant costumes (togas, dresses, large earrings…), his KAPPA hairstyle, and a hard core partying life style which he used to turn himself into an icon, he successfully exhibited and sold his works — nudes, cats… painted in an interesting mixture of Japanese and Western techniques — in the great capitals of Europe, and in New York. Among his acquaintances were Soutine, Modigliani, Diego Rivera, and Picasso. 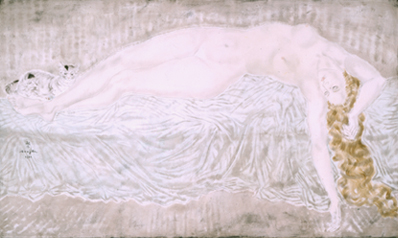 Despite his unprecedented achievements in the West (while at the same time talented Japanese artists such as Saeki Yuzo were driven to despair, or even madness, by their failures to be recognized as true modern artists by Europeans who merely expected JAPONICA from them), some resentments or latent sense of racial pride must have been festering deep in his heart, as he returned to Japan in the 1930s, threw off his roaring 20s GAY PARISIAN facade, donned an assortment of military uniforms and started to paint for the cause of militarism and EMPIRE (it is ironic for me ,though, that the paintings that remain from this period are the most impressive of his works for me, especially his Last Stand At Attu, 1943). 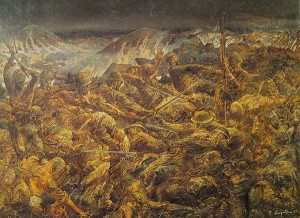 When the war was over, Fujita did another costume change, designing Christmas cards for the GHQ, etc. His Japanese colleagues, however, could not forget his enthusiasm (which was very likely just another facade) for the WAR CAUSE and he was blacklisted by the Japanese Art Association.

Fujita escaped to New York (he was not granted a visa to France), where he had some success, but there too, local artists got together to denounce his wartime collusion. Finally securing his French visa (after one year in the US), he moved to an old farm-house deep in the countryside. He and his third wife converted to Catholicism and changed their first names — he to Leonard. He dedicated the rest of his long life (he died in 1968) to decorating a church with stained glass and frescoes, and to painting pictures of cats and children, all in a style quite different from that which made him famous in the 20s.

As someone who has also spent his life crossing back and forth between two or more worlds, I have always found Fujita to be a fascinating character. That is why when I saw the poster of the Kappa-haired, bespectacled, artist posing with a cat, announcing that there was a Fujita exhibition on, I dropped all plans, got on TX and headed for Ueno. I was excited, but also had a premonition that I would be disappointed. The poster gave no details of which of his works were being shown and I doubted that it would be what I wanted to see — a comprehensive retrospective.

It was not until I entered the Ueno No Mori Bijutsukan (why is this called the Royal Museum in English?), that I found out what the exhibition was about. It seems that in 1992, some large,forgotten works made by Fujita in the late 1920s, were discovered in some warehouses in the suburbs of Paris. Since Fujita was a recipient of the French Legion of Honor (and someone whose works will draw plenty of Japanese tourists) the local government had some of France’s most skillful art restoration experts work on the canvasses which were in atrocious condition. These five works, along with his church decorations (as well as many pieces from his final period in the French countryside) and a recreation of his last atelier, are the central features of the exhibit. 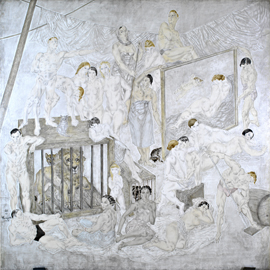 Also included are some of his early works, in the style upon which his reputation was originally built (delicate lines, and a surprising use of white and gray, as opposed to other colors). For me these were the most interesting of those in this exhibition , as I found the restored works, as well as the later church works to be CAMPY (though that is only my opinion, as many Japanese visitors seemed to have been genuinely moved).

Unfortunately, the wartime works, so full of color, passion and historical interest, are not on display, and for me this this left a huge hole in the exhibit. I would also have liked to see more photos of the man in his various incarnations.

The exhibition will be on until Jan. 28th. If you are in Ueno and have an interest in the history of Japanese (western-style) art, or in how cultures can be blended in amazing ways by those of us who move back and forth through them, you might want to check it out.

More than the exhibit, I would recommend reading more about this unique character and checking out the works for ALL his different periods, in books or online. I also enjoyed the book Glory in a Line: a Life of Foujita, the Artist Caught between East and West by Phyllis Birnbaum.

See more of his works and get more info on the exhibition at http://leonardfoujita.jp/.

By coincidence, the day after I saw this exhibit, I saw a very impressive (more than anything in Ueno) early Fujita at the New Otani Art Museum. Sandwiched between the brightly colored works of his European contemporaries, the black and white nude is startling. This museum is small and there are no guards watching over you (don’t you hate that?) so you can take your time and savor the small collection. Also, by strange chance, at the same exhibit were a few works by the Belgium painter Maurice de Vlaminck. It was he who told Saeki Yuzo (the tragic artist I mentioned above) to give up Western style painting, as a Japanese could only be derivative and academic when attempting to paint like Europeans. In the small room exhibiting Japanese works were two scrolls with Mt Tsukuba depicted in the background.

If you are in the Hakone area, or a Yuzo Saeki fanatic, there will be an exhibit of his works through early March at the Pola Museum.