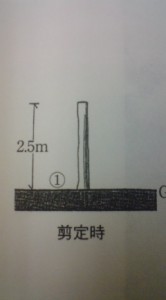 How To Prune A Zelkova (keyaki) According To Japanese Textbooks

Several years ago, I had visitors coming to stay at my house from abroad, and realized that I had better do something about my garden, which day by summer day, due to my neglect, was growing more and more out of control. Neighbors recommended that I contact the SILVER SERVICE, through the city office. I was told that this would be substantially cheaper than any other gardening service as it consisted of enthusiastic and GENKI local retirees who did the job mostly out of the desire to remain active and of use to society. I called them and made an appointment. They came over one morning and I asked them to cut the grass and trim the hedges. I didn’t mention the handful of large trees which I was so fond of, especially the majestic zelkova which towered overhead. Feeling confident to leave the friendly crew unsupervised, I said YOROSHIKU ONEGAISHIMASU and went off to the university.

When I got back I was in for a surprise that literally had me drop down on my knees. Besides having the hedges almost completely deleaved, all the once large trees had been reduced to branchless stumps. Nearly hysterical I demanded to know why they had done what they did. They went on to explain to me that what they did was for the best because now I wouldn’t have to rake up the troublesome autumn leaves in Fall. Speechless, I went inside and poured myself a stiff drink.

Since that traumatic day, I have tried in vain to fathom why EXTREME PRUNING is so commonly accepted in Japan. Well, one reason is that it is in the standard Japanese tree care textbooks! Let me share the details of one with you — I have a copy of one such text right here in my lap!

Planting Design For Street Trees: Landscape Design and management Technology by Akira Kameyama is a very informative book which provides you with just about all the information you will ever need about the various trees used on street-sides and in parks. This includes of course, how to take care of them, Japanese Style.

Here are the textbook instructions for pruning a zelkova which has gown TOO BIG: 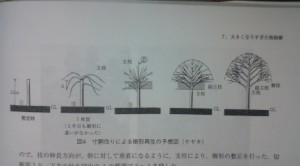 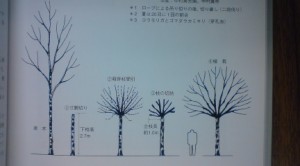 An OVERGROWN Tree (far left), Properly Pruned (to its right) 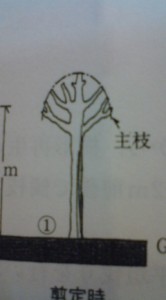 Gingko Trees Are Left With A Little More Branch!