A Celestial Bridge for the Gods of Mt Tsukuba 10 December, 2008 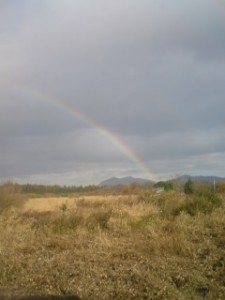 Yesterday as I pulled back the curtain, I expected to have a further look at Tsukuba’s descent into the dried out browns and straw yellows of December. Instead, what I saw had me calling out “Come quick, and look!” Just then the phone rang. It was a friend saying, “Look towards the mountain! It’s a rainbow!” After saying thanks (for telling me what I had already known), the phone rang again, with the same news! Surely, few natural phenomena can bring such a thrill! 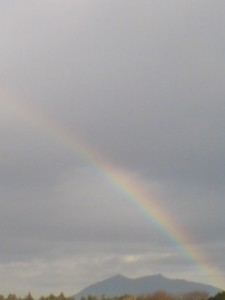 We savoured the spectacle for the few minutes that it lasted, and I then set out for work with the feeling that this would be a special day. I also couldn’t stop thinking about rainbows, or as they are called in Japanese NIJI (虹）, and how until modern science came along to finally (and de-mystifyingly) explain their occurrence, they were the true stuff of myth, with the various cultures and religions of the world each offering their own unique answer to the question: Why are there rainbows?

The Japanese traditionally associate rainbows with bridges (now you know why the famous Rainbow Bridge is so named ). In the KOJIKI, Japan’s oldest (8th century) surviving text which recounts its creation myths in an archaic Sino-Japanese, we are told of how the Gods brought into existence a divine couple (Izanagi no Mikoto and Izanami no Mikoto) who were called upon to create the LAND. For this they used a special rod called a HOKO (this is what the long poles featured on the floats of the famous festival in Kyoto are called) with which they stirred the sea while standing on a heavenly bridge called AME NO UKI HASHI, thus creating Terra-Firma. This celestial bridge was interpreted as being a rainbow.

Thus the scene of a rainbow over Mt. Tsukuba has special significance, as its twin peaks are where Izanagi and Izanami are enshrined.