What Is Now Culture Day Was Long Celebrated As The Emperor Meiji’s Birthday 3 November, 2008

Since 1948, November 3rd has been a Japanese national holiday called BUNKA NO HI (文化の日), or Culture Day in English. On this day it has become customary (or should I say appropriate) to do something CULTURAL – go to a museum, attend a concert or have a look at one of the many displays held at public halls or other venues showing local residents’ (both children and adult’s) paintings, calligraphy, ceramic works, flower arrangements, etc. It is also on the 3rd of November that the Emperor bestows the ORDER OF CULTURE award on those who have been deemed as having made significant contributions in the arts, science, or education.

The whole month of November in fact has now come to be considered a suitable time for CULTURE, and many schools and universities will be holding their BUNKA SAIs (culture festivals) this month. There is also the National Culture Festival, held every November which, as you probably already know, is being held in Ibaraki Prefecture this year (since it is held in a different prefecture each year the next one won’t be held in our prefecture for about 50 years!). This event will involve a huge number of shows and showings in nearly every possible media, at various venues throughout Ibaraki. The festival will run through the 9th of the month.

Just what is the connection between November 3rd and CULTURE? Well, in fact, there is none.  Culture Day was created by the government of post-WWII ally-occupied Japan as part of a sweeping all-encompassing policy of rooting out any vestiges of Japanese militarism and ultra-nationalism, of which November 3rd, since 1868, had been an important symbol. That is because that day is the birthday of none other than the Emperor Meiji himself, who was restored to a central place in the national polity in 1868 after centuries of Shogun rule. It was under his banner that Japan set out on the road to successful modernization and industrialization.  The Meiji Constitution (promulgated by the Emperor in 1889) was an important factor making this possible, but the document’s ambiguous wording also helped set Japan down the road to militarism, expansionism, ultra-nationalism and Emperor-worship (which might be looked on in a different light in Japan now if it hadn’t led to total devastation). After the Emperor’s death in 1912, the name of the holiday changed from Tencho No Setsu to Meiji-Setsu, and continued to be an important day to pay special reverence to the founder and inspiration for Japan’s then still-growing empire.

In post war Japan, there would be no room for the public sanction of such sentiments. With the new PEACE CONSTITUTION drawn up by the occupation authorities, the Emperor was established as a mere symbol of the state (as opposed to being the state itself!) and since then, the birthdays of reigning emperors have been called the prosaic Tenno Tanjobi (Emperor’s Birthday), as opposed to the more grandiose Tang Dynasty inspired Tencho No Setsu (which implies prayer for the long life of the sovereign). The celebration of Meiji No Setsu was also stopped and ultimately forgotten (ask your Japanese acquaintances if they know what November 3rd used to be), as the day was turned into Culture Day as part of the effort to create a NEW JAPAN, which celebrates PEACE, CULTURE, and SCIENCE. And there truly has been a miraculous transformation.

Of course, I would strongly recommend taking advantage of the many cultural events being held this month (especially the National Culture Festival in Ibaraki).

However, November is also a perfect time to think about the Emperor Meiji .  It is still possible to find places where his birthday is remembered. Foremost, of course is the Meiji Shrine (Meiji Jingu), where his spirit (along with his wife’s) is enshrined in the midst of a man-made forest of a million trees, brought from all corners of Japan (and the empire). November 1st is the anniversary of enshrinement and November 3rd has been renamed the “Grand Harvest Festival” (that is how far celebrating the Emperor has become taboo!). There is a display of mounted archery and other forms of martial arts.

It will be a busy month at Meiji Shrine with plenty to observe and photograph. Families all dressed up (with kids in traditional wear) for the Shichi-Go-San celebration (throughout the month) and amazing sculptures created by stacking fruits and vegetables will be on display for the harvest festival, and of course there are usually traditional weddings, especially on weekends. This is one of my favorite places in Tokyo and a perfect place to take visitors from abroad. 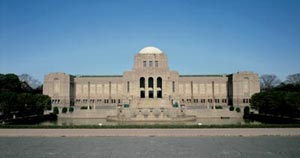 I would also like to recommend another place, but only for those especially interested in Japanese history. It is the FAR-off-the-tourist-track SEITOKU KINEN KAIGAKAN or the Meiji Memorial Picture Gallery, way out in the shrine’s outer garden. 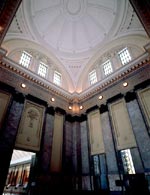 This weighty (made of stone) and grand western style building, which faces expansive grounds, houses 80 large paintings portraying (or should I say mythologizing?) the life of the Meiji Emperor. Besides the paintings, the only other thing on exhibit is the Emperor’s beloved horse (stuffed of course). 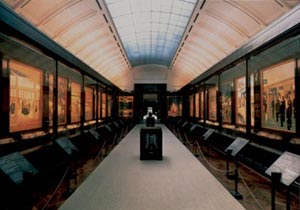 I have never seen any other visitors in the times that I have been there, but that is fine with me, as I could slowly take in each work (some by famous painters) as they progressively and dramatically tell the story of how the Emperor led the nation from backward seclusion to Empire and Glory. As you can imagine, it is a lonely place. It sure does make ya think!